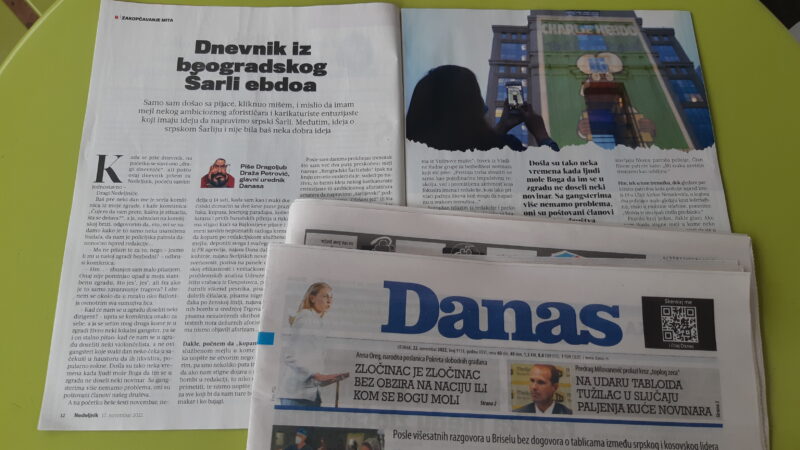 A copy of Serbian daily newspaper Danas over the weekly periodical Nedeljnik with a piece by Danas editor-in-chief Dragoljub Draža Petrović titled “Diary from the Charlie Ebdo of Belgrade.” Photo by Filip Stojanovski (CC BY 3.0).

This story is based on an article by IFEX, based on a statement by Committee to Protect Journalists (CPJ), originally published under a Creative Commons Attribution-NonCommercial-NoDerivatives 4.0 International License.

Serbian authorities should conduct a quick and thorough investigation into the threats made against staff at the privately owned Danas daily newspaper, bring the perpetrators to justice, and ensure the journalists’ safety, the Committee to Protect Journalists said in a statement issued on November 9, 2022.

On Sunday, November 6, an unknown individual from an email address with the name “threateningaccount” sent a message with the subject line “Charlie Hebdo of Belgrade” to Dragoljub Petrović, editor-in-chief of the newspaper Danas, threatening reporters, editors, and columnists with “barrages of bullets” because of its editorial policy, according to Danas, U.S. Congress-funded broadcaster Radio Free Europe/Radio Liberty, and Ana Bellotti Družijanić, head of Danas’ digital development, who communicated with CPJ by email.

The individual mentioned the newspaper’s coverage of Kosovo, Montenegro, and the Republika Srpska (one of the two entities of Bosnia and Herzegovina), countries once belonging to the former Yugoslavia, according to these reports and the email, which was published by trade news site Cenzolovka. The email also listed specific journalists and columnists working for Danas (Snežana Čongradin, Aleksej Kišjuhas, Nenad Kulačin, Teofil Pančić, Nikola Samardžić, Marko Vidojković) and two journalists — Bosnia-based columnist Dragan Bursać and Serbian radio host Daško Milinović — who are not Danas staff members. The email called these journalists “enemy of the Serbian people” and “traitors.” In 2021, Bursać received a death threat and two unidentified men used pepper spray on Milinović while he walked to work.

The prosecutor’s office in Belgrade ordered an investigation, police promised to increase patrols around the newsroom, and police asked journalists to call if they notice anything suspicious, Danas reported.

“It is a welcome development that authorities in Serbia reacted quickly to the threats made by an unknown individual to the editorial staff of daily newspaper Danas and that they increased patrols around the newsroom,” said Attila Mong, CPJ’s Europe representative. “Authorities must ensure the safety of the journalists working there, that the case is thoroughly investigated, and that threats against the press do not go unpunished.”

Bojan Cvejić, editor-in-chief of Danas’ website, said in an interview with the outlet that those who do not feel safe can work remotely. He also said the newspaper’s journalists often receive threatening messages, but this email was sent by someone who is familiar with their work.

In April 2022, Danas staff received a number of death threats via email, messaging app, and comments on their social media pages from both anonymous and named accounts. The messages referenced a quote from Mahatma Gandhi that Danas had published on Instagram, reading “Truth, not God.” The messages alleged that the Gandhi quote was an insult to Christians ahead of the Orthodox Easter on April 24.

CPJ emailed questions to the press department of Serbia’s Ministry of the Interior, which oversees the police, but did not receive any reply.

On November 11, Danas published a short interview with Gérard Biard, the editor-in-chef of the French satirical newspaper Charlie Hebdo, who expressed their team's support for their Serbian colleagues and noted that “Death treats are like racketeering. If you succumb to racketeers, then they never stop, they would keep increasing the price you need to pay.”

Slavko Ćuruvija Foundation said that, as part of efforts to discover who issued the threat, the Office of the Prosecutor requested urgent assistance from authorities in Switzerland, the base country of Proton Mail, which was used to send the threat. Special prosecutor for high-tech crime Branko Stamenković was quoted saying that this threat “deviates significantly from standard threats.”

In a piece in the November 17 paper edition of the Serbian weekly Nedeljnik, titled “Diary from the Charlie Hebdo of Belgrade,” Dragoljub Petrović, the editor-in-chief of Danas, wrote that the Ministry of Interior posted a “permanent police patrol” in front of Danas newsroom premises on the fourth day after the threat was received.

Journalists’ organizations, including Coalition for Media Freedom, Safe Journalists and the Association of Journalists of Serbia (UNS), аs well as the Ministry of Information and Telecommunications of Serbia, condemned the threat and called on police and prosecutors to identify the author of the e-mail.