China is becoming more authoritative and patriarchal under statist Confucianism 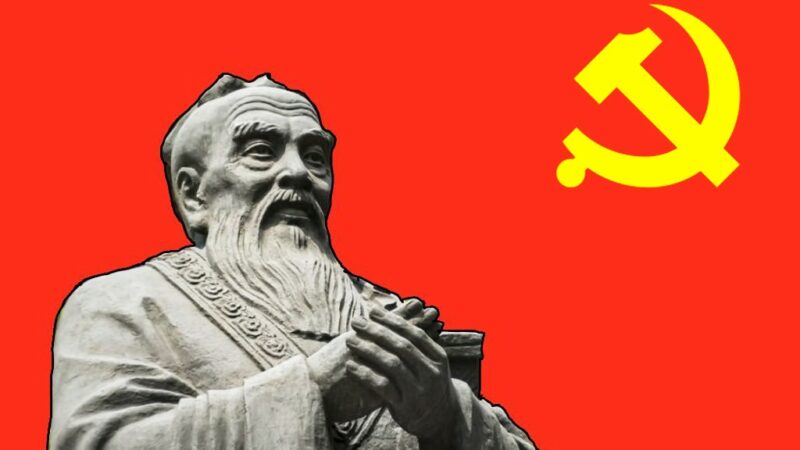 Global Voices is publishing a series exploring the language used during the 20th congress of the Communist Party of China and analyzing its implications for China’s national policy and diplomacy. Find the first, second, third, and fourth articles here.

When the CCP's top leader Xi Jinping came into power in 2012, he presented his dream of the “great rejuvenation of the Chinese nation” — largely understood as his goal to turn China into a strong state economically and militarily. A significant part of this plan is the rejuvenation of classic Chinese culture and civilization.

In Xi’s Congress keynote last month, the term “culture” appears 56 times, and “civilization” appears 29 times. When the word culture appears, it is usually in combination with “socialist culture,” “renovation of traditional Chinese culture,” “cultural confidence,” and “national culture.” He argues that Marxism must blend with China’s context and traditional Chinese culture to address the problems of the era.

As for the term“civilization,” it is frequently connected with “ecological civilization.” Xi also attempts to frame the conflicts between China and the West as a civilization clash and called for the “coexistence of civilizations.”

Xi's fondness for traditional Chinese culture marks a break with the founding spirit of the CPC, as the establishment of the modern China state shifted from the so-called feudalist old China represented by the Qing Dynasty, which was overthrown by the Xinhai Revolution. After the CPC won the Civil War and took control of the Mainland in 1949, the party leader Mao Zedong led the People's Republic of China (PRC) and carried out further land reform to redistribute wealth. The political rhetoric of Marxism was used to justify grassroots violence against the feudal class.

Similar tactics were used in other political campaigns throughout Mao's era — the Anti-Rightist Movement was framed as a counter-movement against the “individualism of the bourgeoisie,” and the Cultural Revolution was framed as a movement to defend the dictatorship of the proletariats against the capitalist revivalists.

Some Chinese political dissidents, such as Wang Dan, see Xi Jinping's era as a rendezvous of the Cultural Revolution, given the re-emergence of the cult of personality in recent years. However, Xi’s project to blend Marxism with traditional Chinese Culture is unlikely to allow space for the rise of grassroots activists in the form of the Red Guards.

The appropriation of Confucian terminology for political usage under the CPC also began with Mao. For example, he used the term Datong 大同 or “great harmony,” which means an ethical practice of compassion, to reinterpret communism — the ideal and final stage of human society.

Xi is following Mao, using the Confucian idea of Datong to justify his political projects such as “common prosperity” in economic policy, “common destiny” in foreign policy, and the so-called “whole-process democracy,” in which democracy only means “for the people” and people are regarded as a whole or a collective, rather than as individuals.

But unlike Mao, Xi is ready to embrace  Confucianism as China’s national ideology as he is eager to consolidate the patriarchal order.

By blending Marxism with traditional Chinese values, he twisted the leftist political term  “class struggle” into “national struggle/fight to win.” The party-state represents the people and becomes the dominant actor in the “struggle,” as seen in the clampdowns of political dissidents through arrests, the cleansing of dissents through censorship and party discipline, the takeover of corporations by party representatives, the power struggles and crackdowns of corrupted cadres through anti-corruption campaigns, and more.

Even for mass mobilization like the three-year fight for zero-COVID, the pandemic rule enforcement workers, the so-called white guards, are acting on behalf of the state, unlike Mao’s self-mobilized red guards. Similarly, Chinese online patriots are also acting within the framework of the “national struggle” when picking fights with China’s critics on social media.

The active appropriation of Confucianism for the single-party state project started in Deng Xiaoping’s era. To justify his market reform, Deng picked up another Confucian term, “Xiaokang society” 小康社會 or moderately prosperous society, to argue for a stage-by-stage development to the “Datong” ideal.

Deng’s political rhetoric was passed on to Jiang Zemin and the Hu Jintao, who endorsed Confucianism as China's national ideology, branded the idea “Socialist Harmonious Society” 和諧社會 to address social conflicts stemmed from economic liberalization. He also set up the Hanban, the headquarters of the highly controversial Confucius Institutes, to extend China’s soft power overseas. Yet, Xi Jinping is the one who brings the national ideology to a new level of political acts.

In the following years, the pursuit of cultural security has evolved into an all-round cultural war against Western values, which includes a doubling down on the censorship of the internet, media, and entertainment sectors,  anti-western campaigns, including anti-Christmas and anti-thanksgiving, anti-Japanese cultures and festivals, crackdowns on feminist and LGBTQ+ communities, ban on “sissy idols” in the entertainment industry, clampdowns on foreign language curriculum, and more.

At the same time, nationalism and Confucianism are injected into citizens’ value systems through persuasion, education, and coercion.

Hence, in Xi’s new era, we see a flood of Little Pinks or online patriots and Wolf Warriors or aggressive Chinese diplomats and nationalists on social media picking fights with anti-China forces, the cultivation of masculinity among boys in elementary education, the introduction of delayed divorce proceedings to make divorce more difficult, the revival rituals like of deep bowing to parents at schools and Hanfu as a politically correct dress style, etc.

The interpretation and reinvention of Confucianism are, of course, under the control of the single party:

My story on a fascinating find by @ChinaFile
https://t.co/vx3JKj7bpk

The impact is immense. Space for women, LGBTQ+ communities, and those who opt for a liberal lifestyle is shrinking.  The setback for gender equity has been indicative in Xi’s new all-male cabinet. As pointed out by Harriet Evans, professor of gender politics in China, the revival of Confucian values has been “accompanied by encouragement to women to put their energies into having more babies and upholding ‘traditional values’.”

The clash of civilizations

It is noteworthy that by turning Confucianism into a national ideology,  the CPC, on the one hand, legitimizes its domestic cleansing of dissent, values and beliefs that undermine the single-party regime and, on the other hand, reframes its conflicts with the West, in particular the areas of human rights and trade wars, as a clash of civilizations, rather than political models between communism and capitalism during the Cold War.

The civilization narrative helps generate diplomatic space for China to call for respect in its domestic policies, including the human rights violations in Xinjiang and Hong Kong, and cooperation as reflected in Xi’s talk on ecological civilization in his Congress speech.

While the civilization talk can be viewed as a gesture in de-escalating the conflicts between China and the West, the combination of nationalism and Confucianism will inevitably make China a more authoritative and patriarchal society than ever.