'Necessary' and 'appropriate', or 'not a legitimate solution'? 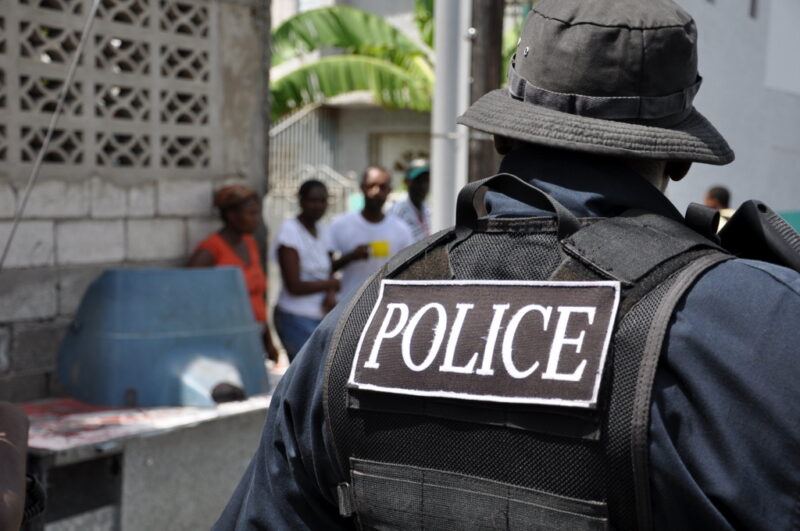 A police officer patrols a Jamaican community during the country's 2010 State of Emergency. Photo by BBC World Service, CC BY-NC 2.0.

On November 15, Jamaica’s Prime Minister Andrew Holness held an early morning press briefing to declare States of Public Emergency for two weeks in several areas of the island: Westmoreland, St. James, Hanover, Clarendon, St. Catherine, a section of St. Ann, and parts of Kingston and St. Andrew. Following a parliamentary debate on November 22, the measures were proposed to be extended until January 14, 2023.

The State of Emergency (SOE) involves checkpoints, heightened police and/or military presence in the designated areas, and increased law enforcement activities. The Emergency Powers Act was tabled in Parliament on November 15 and the two separate sets of regulations that govern its implementation were published (“gazetted”) and distributed two days later.

In explaining the rationale behind the measure, the prime minister cited an increase in the murder rate, suggesting that criminal activities are contributing to public disorder. A recent impromptu taxi strike, for instance, sparked unruly scenes and the intimidation of members of the public. As such, Prime Minister Holness explained, the government felt that the SOE was “necessary” and “appropriate.” He also said that his administration felt the need to “act in a preemptive way” given the increase in gang activities.

This is not the first time that the Jamaican government has resorted to such measures in an attempt to curb crime, amid rising levels of insecurity in many communities. It has been just over a year since the last State of Public Emergency, declared on November 14, 2021. Prior to that, an SOE was declared in January 2018.

This approach has been controversial, especially in the eyes of the parliamentary opposition, who did not consider the extension of the SOE a given. Opposition Leader Mark Golding maintained that his party was not in support of the extension, noting that there was no proper consultation on aspects of the legislation prior to the issuance of the SOE, and that the regulations were two days late, leaving a “legal vacuum.” Asserting that SOEs have “no lasting benefits” and are “not a legitimate solution to violent crime,” he accused the government of resorting to SOEs to make up for its lack of success in combating crime.

The human rights lobby group Jamaicans for Justice (JFJ) strongly objected to the “governments’ flagrant disregard of rule of law” and called for “the composition and registry of the Review Tribunal be published so detainees can make objections,” among other concerns.

Nevertheless, the government used its parliamentary majority to help usher in its proposed 46-day extension. The resolution will now go to the Senate, where it will need the support of at least one opposition member to pass.

Earlier this year, Jamaica's Supreme Court awarded one citizen a substantial sum in damages for breaches of his rights; it also ruled that the Emergency Powers regulations for the 2018 State of Emergency were unconstitutional.

Some communities, meanwhile, have been badly hit by gang-related crime and violence. These include the St. Andrew South Police Division in Kingston, which was placed under a State of Emergency in 2019 and has recorded over 120 murders to date this year. While residents of this area appear to welcome the measures, uncertainty remains as to whether the SOE will make a difference in the long term.

According to the prime minister, 10 of 19 police divisions have seen an increase in crime and account for three-quarters of murders. During the noisy parliamentary debate, he insisted that the island's murder rate (12 in the five days since the SOEs began) was the lowest in many weeks. He also maintained that the SOEs have been “the most successful tool” in bringing down the crime rate “in a short time.”

In seeking to justify an extension of the measures, he insisted that “murder is a public health crisis,” and that his administration's priority is “to protect lives of innocent citizens.” Prime Minister Holness noted that 1,360 murders took place this year up to November 13, just before the SOEs were established — a 6.8 percent increase over 2021 to date. Using dramatic language that included the terms “psychopaths” and “criminal terrorists,” he vowed to crack down on violent crime. He also warned of a “sophisticated network” of transnational crime “intent on exercising sovereignty in parts of Jamaica.”

During his presentation, the prime minister catalogued a series of planned legislative measures, including amendments to the Fingerprint Act, the Bail Act and others, and said that he is considering asking for minimum 30-year sentences for murder. Meanwhile, the government has announced plans for a new maximum security prison.

The recent gun amnesty, which ran from November 5-19, reportedly garnered 101 firearms and 3,000 rounds of ammunition. As the amnesty ended, the Jamaica Constabulary Force reminded citizens:

You had up to midnight last night to hand in illegal firearms and ammunition under the Gun Amnesty.

Now, if your caught with an illegal firearm you can be imprisoned for up to 25 years. pic.twitter.com/0HzDQFGWVr

Referring to the new Firearms Act, the prime minister added, “We want to get you — the person with the gun.”

There have been some discouraging reports, and crimes have been committed in several areas where the SOEs have been in place. On the day after the initial announcement, a baby was among four injured in a drive-by shooting in St. James, in which two were killed.

Video of the incident [WARNING: GRAPHIC CONTENT] circulated by the Jamaica Gleaner sparked some outrage, though it was not the only one shared. Other Jamaicans felt that citizens should obey the security forces’ orders and not cause trouble. The Independent Commission of Investigations (INDECOM) has stated that it is investigating the incident, noting that the man who was killed appeared to be unarmed. The soldiers involved have reportedly been removed from the area in the interim. No police officers were present at the time.

Jamaicans for Justice decried the incident:

JFJ condemns what appears to be an extrajudicial killing of a resident. We call for a swift and thorough investigation into the matter. We also call for the JDF officer to be removed from frontline duties pending investigations. pic.twitter.com/kqQrYKEO7R

With crime, violence, concerns over human rights, and the proliferation of guns in the society still a major topic of conversation on social media and beyond, are the solutions anywhere closer within grasp? It appears that there is still a long way to go as Jamaica grapples with its murder rate — to date, the second highest in the world.