Iranians vent their rage against the government in creative ways. 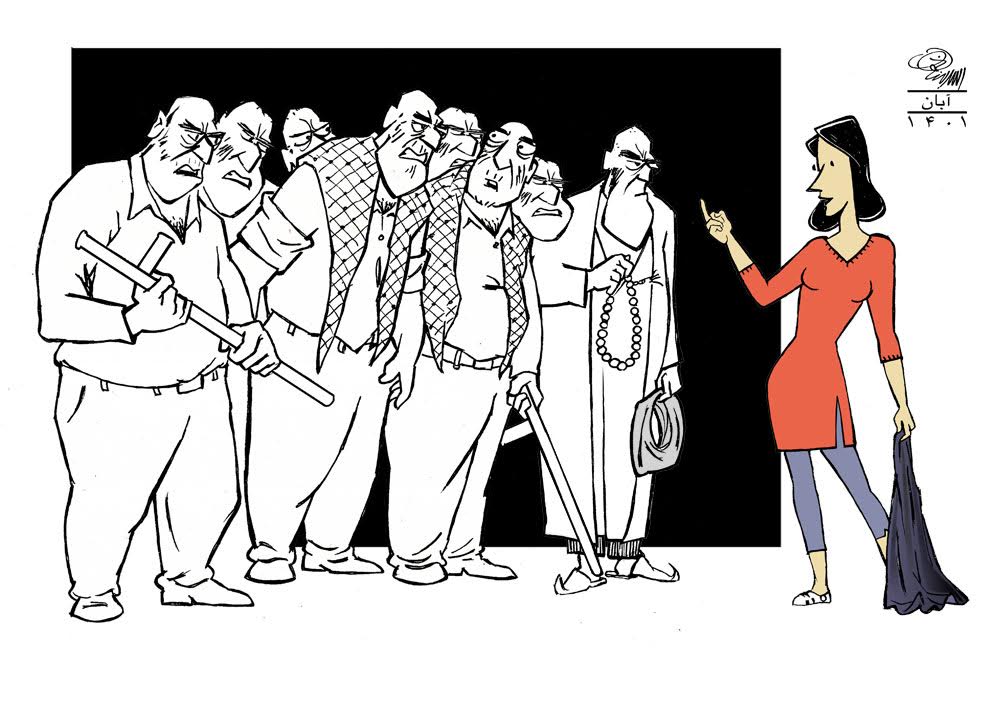 It has been eight weeks since protests erupted across Iran on September 16 in response to the death of Mahsa (Zhina) Amini, who was detained by the country's morality police for allegedly violating hijab regulations. Despite harsh repression, the killing of at least 360 people, including 58 children, and the arrest of thousands of protesters, the nationwide movement for freedom has continued.

On Tuesday, November 15, a strike by shopkeepers began across Iran to mark the third anniversary of a brutal crackdown against protesters. Meanwhile, Iranians have used a variety of inventive methods to resist the tyranny that undermines the authority of theocratic rulers.

Iranians defy discriminatory regulations, like the headscarf requirement, as well as government symbols like pro-state banners and cleric turbans. They also oppose the regime whenever they have the chance, even while they are mourning loved ones who were murdered during protests, by chanting anti-government slogans, performing songs, or taking off their headscarves. “Free embracing” is another way they express their love for one another.

No to compulsory hijab

After the Islamic Revolution, Iran’s rulers imposed discriminatory laws on Iranian women, such as the compulsory hijab. Many women, including schoolgirls, have burned their hijabs, cut their hair short, removed their hijabs while walking, and posted about it on social media in protest of Mahsa's murder.

Protests are ongoing in Iran in the face of brutal crackdown by the Islamic Republic.#MahsaAmini
This video shows schoolgirls in Tehran today burning their mandatory hijabs with public’s applause and cries for Freedom and chants of #WomanLifeFreedompic.twitter.com/ZMpmmq7QLB

This is how women in Iran stand up to tyranny!#MahsaAmini #IranProtests #IranRevolution #WomanLifeFreedom #Iran pic.twitter.com/1HpHKzcN6o

The Islamic Republic imposed gender segregation in many facets of Iranian life. The state has implemented systematic segregation in schools, hospitals, colleges, transportation, and sports. Due to long-standing gender prejudice in Iran, women have been forced to travel in the rear of the bus alongside the men, who were separated from them by a metal bar.

Iranians have started a “turban throwing” movement to protest Shiite clerics who have been ruling the country. Their authority is being challenged by Iranian youth on the streets.

Iranian women must adhere to strict dress codes, and public dancing with people of the opposite sex is prohibited. Iranians are defying Islamic law by kissing, hugging, and dancing in public.

🇮🇷My friend just sent me this amazing photo of a forbidden kiss in #Iran❤️ pic.twitter.com/lDmhZGva9q

On this 10th consecutive day of anti-regime protests, two women from the Kurdish-speaking town of Marivan in Iran are seen joyously hugging each other without forced hijab.

Iranian use the funerals of murdered protesters to vent their rage at the regime once more.

🔴Iran's answer to Jamie Oliver was beaten to death by security forces after anti-regime protests, triggering a fresh wave of unrest.

Thousands marched on Saturday during the funeral for Mehrshad Shahidi, who was killed the day before his 20th birthday pic.twitter.com/A5inJYzzTk

Thousands of people marching to #MahsaAmini’s funeral in Saghez, Iran. This is following 40 days of continuous protests and crackdowns. #مهسا_امینی pic.twitter.com/mnm1UQzwSm

Protests on ‘chehelom’ (40th day since someone's passing) has become somewhat of a tradition at this point in Iran.

The video below shows a crowd of protesters in Karaj as they mark Hadis Najafi's ‘chehelom’.pic.twitter.com/tjEMBOwKGd

Artists in Iran and elsewhere have created a wide range of works of art, including music, paintings, cartoons, and animations.

Protests in Iran always produce a huge volume of protest art, poetry and songs. But the ongoing 2022 protests, centred around women's freedom, has reached and resonated all over the world.

Here's a beautiful one from the Arts University, Tehran. pic.twitter.com/R9wboy27IZ

Security forces detained several artists, including rapper Saman Yasin, who was sentenced to death, and famous rapper Toomaj Salehi, who is allegedly being tortured.

According to #ToomajSalehi‘s family, despite repeated requests, visitation requests have been denied. Toomaj Salehi is still under torture in solitary confinement and his life is in danger.#توماج_صالحی pic.twitter.com/K5Afy0wm2T

Students of the arts are using their talents to criticise the state-sanctioned killing of protesters.

Iranian students protesting at #Yazd University of Art and Architecture on Sat, Oct 22, 2022. The students have turned the water in the pool red, symbolizing the regime's killing of protesters. Video: @1500tasvir #مهسا_امینی#ایران #یزد#MahsaAmini#IranRevolution2022 #Iran pic.twitter.com/hFpLMvprrH

Iranians use art to protest the general situation and to support political prisoners such as Hossein Ronaghi, an outspoken advocate for free expression. On September 24, he was arrested and moved to Evin prison. According to his family, his life is in grave danger because of a kidney condition; he has been on a hunger strike for more than 50 days, and both of his legs have been broken in prison.

#HosseinRonaghi’s Life is in danger. He has been on a hunger strike since his violent arrest more than a month ago. Tonight he was transferred from Evin to the hospital in grave condition. He must be released immediately. #MahsaAmini pic.twitter.com/uA8ZGlJvXC

Art of Protest…
We still fighting for our basic human rights and get killed by Police
A child lost her mother, A father lost his daughter, a mother lost her son and Iran lost its children #IranProtests #MahsaAmini pic.twitter.com/iL1Zymn2bU

Several athletes have expressed their solidarity with the Iranian people's struggle for freedom. Elnaz Rekabi, an Iranian professional rock climber, was greeted as a hero by the Iranian people after competing in a competition without a hijab, defying the Islamic Republic's rule, in South Korea in October.

On November 16, Saeed Piramoon, a member of the Iranian beach soccer team, symbolically cut his hair after scoring a goal against Brazil to express his solidarity with  Iranian women.

Iran today beat Brazil to win the Intercontinental Beach Soccer Cup in the UAE but it was this goal celebration by Saeed Piramoon that will have people talking for a while.

He celebrated by “cutting” his hair in apparent support for the protests in Iran.pic.twitter.com/09M3wbG9CO

People in Iran and around the world remembered and honored Baluch protester Lajaei Khodanoor. Years ago, Khodanoor  was reportedly tied to a pole as punishment for getting in a confrontation with the son of a basiji paramilitary member and refused water. He was later killed by Iranian government forces.