How the Kazakh language found itself at the center of debates 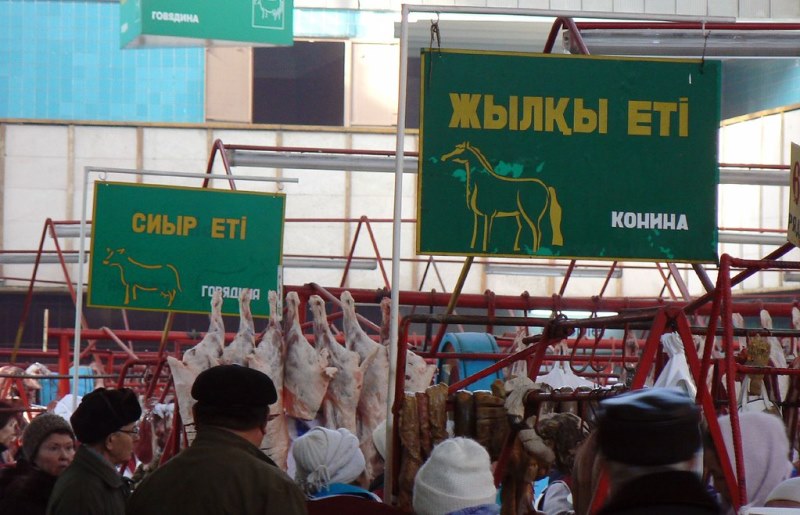 Bilingual Kazakh and Russian language signs at the meat section of the Green Bazaar (Көк базар) in Almaty, Kazakhstan. Photo by Sara Yeomans via Flickr (CC BY 2.0)

In late October, while Kazakhstan was desperately trying to absorb the social and economic consequences of the enormous flight of Russian citizens, predominantly young men, escaping “partial mobilizations” announced by the Russian president Vladimir Putin on September 21, 2022, a comment on the use of the Kazakh language by a prominent businessperson caused outrage on social media in Kazakhstan. On October 19, at an orientation meeting with Russian citizens newly arrived to Kazakhstan, Ramil Mukhoryapov, an e-commerce tycoon listed among the 50 most influential businesspersons by Forbes Kazakhstan, interrupted the speaker, who was explaining the linguistic peculiarities of the country, to say that understanding Russian but preferring to respond in Kazakh is a sign of nationalism and lack of culture.

As soon as video from the meeting spread across social media, his words caused public outrage and urges to boycott his companies’ services and take legal action. At first, he responded by posting a poll in his Instagram account, whether responding in Kazakh to “a guest from Russia” is in accordance with “traditions of Kazakh hospitality,” comparing, in the meantime, the current Russian flight from mobilization to the forced deportation of the Chechens and Ingush by Stalin in 1944, but soon gave up and issued a video apology in Kazakh. As it turned out, for more than 10 years, Chocofamily's online services and mobile apps did not have fully-functioning Kazakh language versions, so the company hurriedly initiated Kazakh language feedback and pledged to launch full-fledged services in Kazakh by the end of the year.

However, this was not the first instance of the public outraged directed towards the companies of the Chocofamily group, the 6th fastest growing enterprise in the country. In 2017, the online travel shopping branch of the group launched a video ad presenting a groups of women wearing only neckerchiefs and stewardess’ side caps. In slang the Russian word for side cap (пилотка) also designates female genitalia. Back then, the public protested against their sexist ad objectifying women, which temporarily led to a drop in the service’s ratings, but the company did not withdraw the ad.

In the meantime, local Telegram channels shared screenshots allegedly of Mukhoryapov's social media from 2014, when Russia annexed Crimea and started the subsequent war, where he praises Russian President Putin and welcomes Russian intervention in case “some radical Islamists organize Maidan here.” In the course of the last few months, however, he has posted comments against the current Russian invasion of Ukraine. As for his recent comments, a group of twenty members of the lower house of the Kazakh parliament appealed to the attorney general to evaluate his speech, and the police department initiated a criminal case against him for inciting social strife. 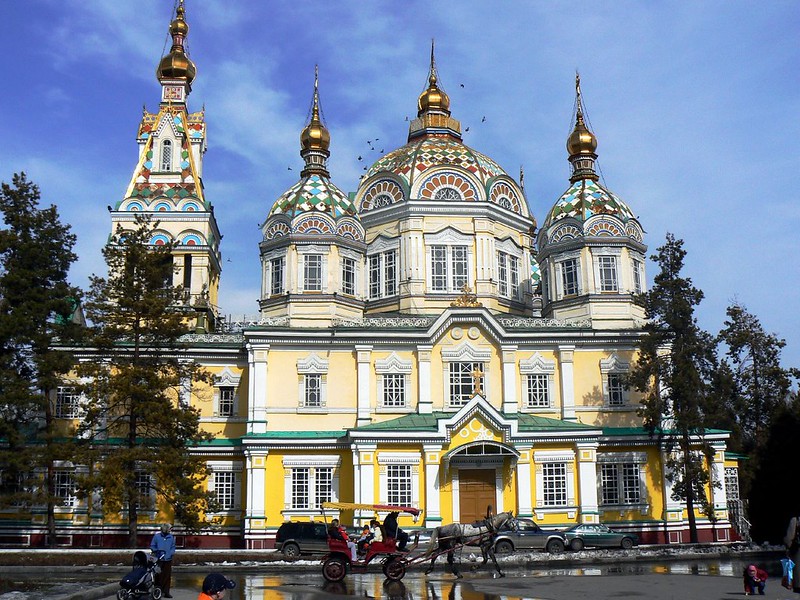 This raging public debate stirred up just days after the Kazakh president Kassym-Jomart Tokayev proposed creating an international organization to support and promote the Russian language at the informal summit of the Commonwealth of Independent States (CIS) in St. Petersburg, Russia, on October 7, coinciding with Putin’s 70th birthday. This generous “present” by the Kazakh president, which was proudly circulated by all major Russian media outlets, was somehow omitted by the official press office of the Kazakh president, yet immediately sparked outrage in the country. Indeed, the Kazakh president’s zeal to support one of the official languages of the United Nations (UN), that has an official status in several countries and is spoken by about 220 million people, seemed somehow irrelevant.

Tokayev's insensitive gesture came at a time when Kazakhstan, its sovereignty, territorial integrity, and culture are being openly and systematically harassed by Russian politicians and media personalities. Just in August 2022, the former Russian president and the current deputy chairman of the Security Council Dmitry Medvedev depicted Kazakhstan as “an artificial state, former Russian territories,” accused Kazakhstan of committing genocide against ethnic Russians, and proclaimed that there would be no order, unless Russians get there. Unsurprisingly, Medvedev’s assistant later claimed that this particular post in VKontakte was somehow modified by a hacker.

As for Tokayev, after a week’s silence he uttered a rather unconvincing argument for the creation of an organization to promote Russian language, which laid in the intention “to create an international organization in the image of the UN using the positive experience of Francophonie.” Later, upon the growing discontent, especially in Kazakh language social media, over his endeavors to promote Russian with no worthy efforts to promote Kazakh, his response was rather gloomy:

The sphere of use of Kazakh language expands every year. Therefore, there is no ground for worries. It is unacceptable to involve Kazakh language in political games. These kinds of mistakes led to tragic consequences in some countries.

However, with the launch of the bloody Russian invasion of Ukraine in February 2022 and the increasing belligerence and expansionism of the official Russian rhetoric concerning former Soviet states, Kazakhstan in particular, it was the Kazakh language that unwillingly found itself at the crossroad of political affiliations. Interestingly, it seems to be Putin’s war in Ukraine that induced many Kazakhs to embrace the Kazakh language, and, in some cases, to start learning it anew. This sentiment, for instance, urged Azamat Junisbai, “a middle-aged Kazakh man” and a university professor in California, whose primary language is  Russian, to sign up for Kazakh language courses this fall.

As Zarina Baimussina, a Kazakh-language publishing house editor and translator, who has run a Kazakh language club for year-and-a-half, revealed in a recent interview:

After Putin launched the war, the number of people attending the club increased. After the mobilization, Russian citizens also started coming to learn Kazakh. Now they are learning our language and getting acquainted with our customs and traditions.

As it turned out, the Kazakh speaking clubs are founded and run not only by ethnic Kazakhs or language specialists, but by ethnic Russians as well. One of them, “Batyl bol” (Be brave) functions in ten different cities of Kazakhstan. Its founder Alexei Skalozubov also admits that in his main job as sales manager he started to feel the growing necessity to speak Kazakh.

In the meantime, while heated debates around the Kazakh language seem to slowly fade away, the Kazakh government initiated a bill stipulating that lack of the knowledge of Kazakh might be considered among justifications for denying naturalization or reinstatement of the Kazakh citizenship. Interestingly, this initiative was proposed just a few days after the Russian Federal Security Service (FSB) revealed that between July and September alone 1.3 million people traveled from Russia to Kazakhstan.