It is up to member states to decide what happens afterwards 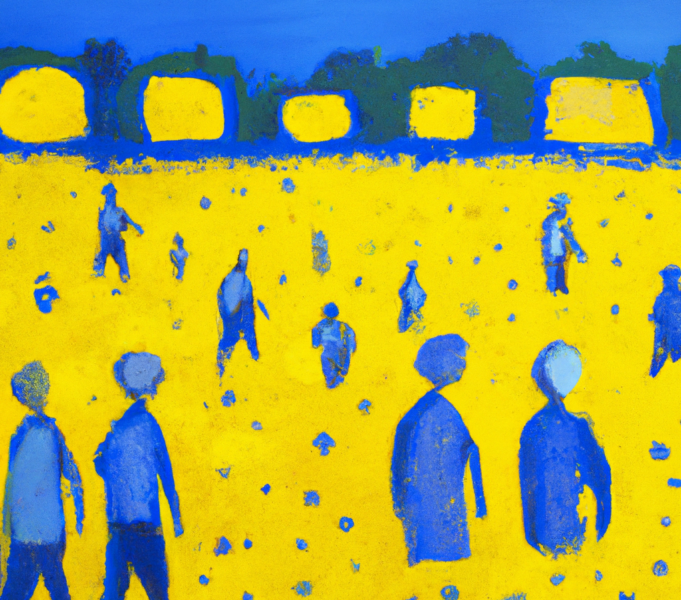 Irina is an optimist, and she is full of life.  In spite of the life of this 28-year old being devastated and twisted during the past nine months, she, like millions of Ukrainian refugees, is trying to be resilient. “I have been in Spain since March 2022. We left with my mom and my teenage niece when it became possible to move around Kyiv, and we ran, although bombing still continued. We got to Poland first, and heard about volunteer organization inviting people from Ukraine to go to Spain, and we went, on a bus, without knowing where or for how long, because in Poland, the shelters were already overcrowded”, – she said in her phone interview with Global Voices.

Irina is now living at an apartment arranged by the volunteers but which is only guaranteed till the New Year. Although Spain decided that payments would be made to the Ukrainians running from the war, it has so far not paid anything, though it has provided housing and food for those whose living arrangements were done through Cruz Roja, the Red Cross.

“I had a successful small business in Ukraine, selling sports and yoga clothes in an online store and through Instagram…  It was all produced in Ukraine, by as many as seven local producers…  Now only two are left. The store is barely functioning, of course,” Irina says.

Irina's boyfriend and her brother have both joined the Ukrainian army. Irina’s mother and her niece, Nastya, went back to Kyiv in July.  The teenage girl could not handle losing all her friends and going to a school where she did not speak any of the languages (schools in Catalonia are taught in Catalan and a bit of Spanish).  Irina’s mother's husband became very ill (men of the age of military draft cannot leave Ukraine), so she went back, too. This happened at the time when Russia started extensively bombing Kyiv again.

“They are sitting without electricity, sometimes without water…  But Nastya is still very happy,” Irina continues. “She doesn’t want to leave Kyiv again.”  Irina, on the other  hand, stayed. She is taking intensive courses of Spanish and 3D design, and hopes to find a job in Spain. “I worked at the bar for a while,” she says, “but I understood that I have to learn Spanish and work as a professional here, not wasting my life at the bar job.”

Irina is not alone in wanting to live her life now in the country which gave her a temporary protection. EU countries have accepted as many as 4.7 million refugees from Ukraine, according to the UNHCR.

No precedent in EU legal history

In an unprecedented move, the European Union adopted a Temporary Protection Directive which requires EU member states to accept mass influx of refugees. The directive was designed during the war in Yugoslavia (2001) but had never been applied until March 2022, in the immediate aftermath of the Russian invasion of Ukraine.

Stephen Phillips, a researcher from the Åbo Akademi’s Institute for Human Rights, explained to Global Voices in a phone interview:

The challenge is that this is the first time it's been implemented at the EU level.  We don't have any historical case to draw on. And it's very limited in terms of time, to a maximum of three years. But this current TPD is for 12 months until March 2023, which has now been extended until March 2024. The idea is that they will continue to assess the situation in Ukraine and decide whether the reasons for offering that temporary protection still exist. And then after three years, we don't know because we don't know how long the conflict in Ukraine will continue to the extent that people need to be outside of Ukraine. And we don't have a precedent for it.”

Lina is another refugee from Ukraine. After five months of waiting for her documents to be ready, she has finally found a job in Finland.  “Ukrainians are mostly hardworking, economical and persistent people. During the eight months of the war, people slowly settled down, found a way to earn money, whoever could.” she said.

Lina is studying Finnish, and hopes to stay in the EU. She talked to Global Voices over the phone:

I came from Kharkiv, and, although the situation at the end of March in my city and region was tense, my decision to go was also motivated by the search for a better life, although of course I was primarily running from the war. My apartment in Ukraine is intact, but I know that I will try everything possible to stay here. The “temporary protection” residence for me became an opportunity to find ways to gain a foothold in Finland that I could not have had before: finding a job for a person from outside the European Union is extremely difficult. Fees to pursue any kind of studies are also above what the average Ukrainian can afford.

But will Ukrainian refugees be able to stay in the EU after the directive ends? Stephen continues:

That would be a matter for each individual EU member state to decide. There's nothing in the Temporary Protection Directive, because it is very limited in terms of massive influx, huge numbers of people all fleeing at the same time. Interestingly, though, and relevant, it wasn't implemented in 2015–16 when there was also very large number of people coming into Europe. After the directive ends, it is going to be up to each individual member state to decide if they want to offer some other form of residence. What the temporary directive does is give those fleeing the war in Ukraine access to a residence permit and various health, social, and educational services. There are basic levels for that in the directive, but then all of the different EU member states have a fair bit of freedom as to how they choose to implement this. You'd need to go through every one of 27 states to see exactly how they're implementing it. The directive itself is not designed as an ongoing permanent measure; it's made to deal with a crisis. How states work with people who then wish to stay once the conditions for Temporary Protection have passed, is going to be a state-by-state question. There's nothing in the directive that can oblige states to act in a certain way once the protection period is over.

The uncertainty of the situation is high, and the way EU states will deal with changing the status of those under temporary protection when the directive and the conflict ends, is still not known.  However, this is something for the EU to start considering.

Lina adds that there are also other categories of Ukrainian refugees that the EU needs to think about now:

The critical question is how people who are unemployed, for whatever reason, stay in the EU countries when the war is over. For example, those elderly and people with limited mobility, where should they go if there is nothing to return to in Ukraine?  Also, in a year or two, the issue of family reunification will be an urgent issue for the European Union. Since a lot of people have already asked the question “are we going back to dad in Ukraine, or dad is coming here to us”: it seems to me, that many who have already decided to stay will choose the second option.

The costs of the Russian war are high for Ukraine: the unemployment rate has approached 35 percent, and the poverty rate may reach 25 percent by December this year, and twice that by the end of the next.  Of course, among the 4.7 million Ukrainian refugees, the majority still wants to return home once the war is over. The EU needs to consider what is going to happen to those who don’t.