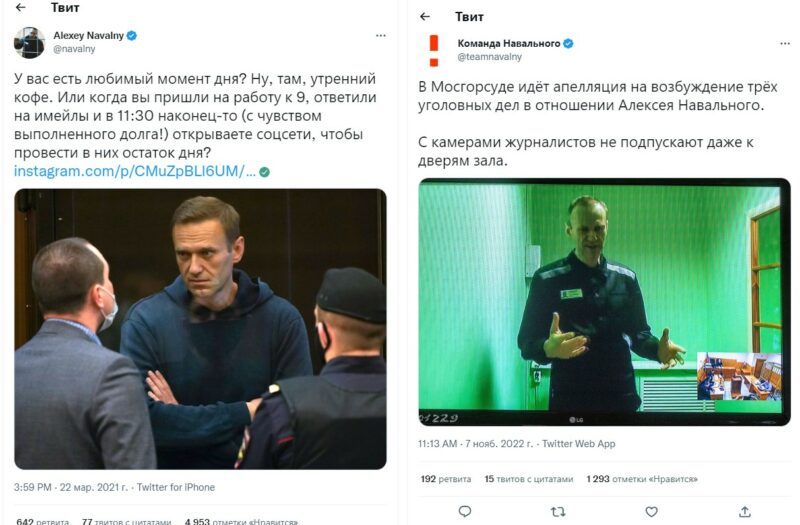 Putin’s main critic and the person who led most of the largest protests of the decade in Russia, Alexey Navalny, survived an assassination attempt in October 2020 while in Russia .  He returned to his countryafter this, in spite of warnings that he would be thrown to prison.  He is now serving two prison terms of one and a half, and nine years, while other criminal cases (nine in total) are being imposed on him.  The russian government is also harshening his conditions in jail on a weekly basis.  On November 17, his representative Kira Yarmysh wrote:

Alexey @navalny was transferred to a cell-type room. It's like a punishment cell, only not for 15 days, but forever.

Further on, Alexey’s own account on Twitter which his colleagues are posting to from the words he sends through his lawyers, explained:

6/14 A convict in a Russian colony sits in a “dormitory”, i.e., in a barracks. A convict the prison administration is very upset with sits in the punishment cell, where there is absolutely nothing and everything is forbidden, but you can only keep him there for 15 days at a time.

8/14 And for the more hardened ones, there is the “cell-type room”. It is a regular cramped cell, like the punishment cell, except that you can have not one, but two books with you and use the prison kiosk, albeit with a very limited budget.

Iliya Matveev, a Russian political scientist, posted a picture of the same prison cell Navalny is kept in from now on:

Alexei Navalny is moved to indefinite solitary confinement in a cell that looks like this.

Long-term solitary confinement is a form of torture, as confirmed by the UN. pic.twitter.com/CWpgN5Vqfz

The bed where a prisoner sleeps, is a folding one that fits into one of the walls. “They fold it when it’s daytime so that a prisoner cannot lie on it outside of night hours,” he explained.

Read more: ‘Call them by their names': Stories of Russian anti-war political prisoners

Since he was put in jail, Navalny has been subjected to a number of harshened conditions. He has been put to a punishment cell seven times, each time for 15 days. At the beginning of his sentence, Navalny looked like this:

Do you have a favorite moment of the day? For example, having a morning coffee.  Or when you arrive at work at 9, answer your emails, and at 11:30 finally (with a sense of accomplishment!) open up social media to spend the rest of the day on?

An appeal against three more launched criminal cases against Alexey Navalny  is going in Moscow city court.  Journalists who have cameras are not allowed even to get to the courtroom door.

Navalny's case is, of course, not the only one: there are hundreds of political prisoners in Russia and Belarus.  However, his sentence is one of the harshest ones, and new criminal cases are being opened by the authorities against him, it seems, on a monthly basis.