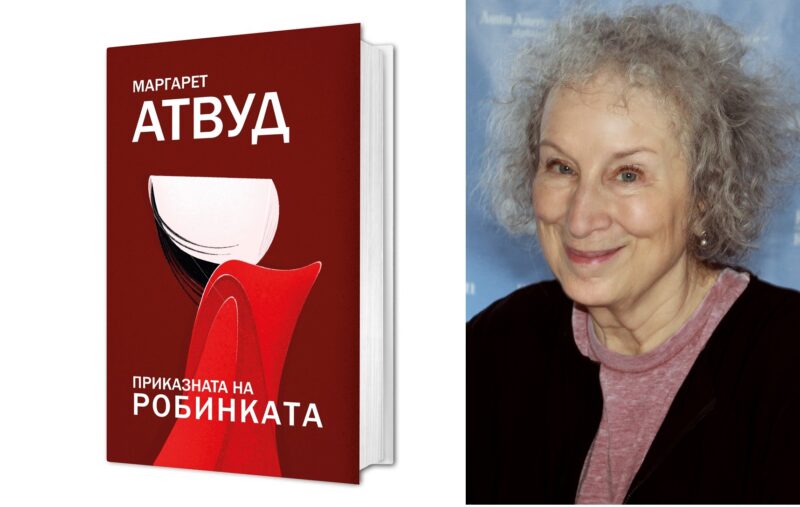 Front cover of a Macedonian edition of “The Handmaid's Tale” by Bagemot, and a photo of Margaret Atwood by Larry D. Moore via Wikipedia, CC BY-SA 4.0.

Canadian poet and writer Margaret Atwood was joined by Hollywood actor Jim Carrey in ridiculing the travel ban to Russia imposed on them alongside 98 other Canadians.

On November 14, the Ministry of Foreign Affairs of the Russian Federation published a list with a hundred Canadian citizens targeted with “personal sanctions” as an act of revenge for the latest round of sanctions introduced by Canada for 32 persons related to Putin’s regime. The blacklisted Canadians include state officials, political analysts, journalists, members of organizations related to Ukrainian diaspora, and also artists like the Atwood and Carrey.

The Russian Foreign Ministry announced that these latest sanctions, amounting to a ban from entering Russia, are a reciprocal “response to the ongoing imposition of sanctions by the regime led by Prime Minister Justin Trudeau on Russian leadership, politicians and parliamentarians, members of the business community, analysts and journalists, and cultural figures, as well as anybody whom the Canadian Russophobic authorities consider objectionable.” Radio Free Europe noted that “there are now 1,005 Canadian citizens and companies on Russia’s sanction list.”

Writer and poet Margaret Atwood (82) has published 18 novels, 18 books of poetry and 11 nonfiction books. She’ a recipient of numerous awards including two Booker Prizes, and of the Golden Wreath of the Struga Poetry Evenings in 2016, (which is possibly the oldest continuous international poetry festival, held annually in North Macedonia).

Atwood was already world famous when the Netflix TV series based on her dystopian science fiction book “Handmaid’s Tale,” which was nominated for the Nebula in 1986, increased her celebrity status. She is often among the candidates for the Nobel Prize for literature.

Jessie Gaynor, senior editor of Literary Hub, opined that the “sin” which caused the Kremlin to put Atwood on their latest sanctions list was signing the Open Letter by PEN International,  signed by over 1000 writers worldwide, including several Nobel Prize winners, expressing solidarity with writers, journalists, artists, and the people of Ukraine, condemning the Russian invasion and calling for an immediate end to the bloodshed.

Atwood has been outspoken critic of all kinds of tyranny both through her works and public appearances, and over the last year she has been adamant in addressing the failures of  Putin’s propaganda.

Actor Jim Carrey was allegedly sanctioned by Russia for tweeting a recommendation for a documentary movie about Russian opposition leader Alexey Navalny.

In Daniel Roher’s doc ‘Navalny,’ one brave man and his family stand up against intolerable evil. Navalny himself exposes Czar Putin and his soulless minions in their fiendish conspiracy to poison him, suppress the truth and intimidate the Russian people. https://t.co/YRBXBAFNtN

After the announcement of Russian sanctions against them Atwood and Carrey took to Twitter providing ironic reactions. First Atwood tweeted:

Dang! @JimCarrey and I had planned a little naughty weekend getaway in Moscow. Guess it will have to be Kyiv instead. https://t.co/FzGkiqiVJK

Yes @MargaretAtwood, I’m afraid the worst has happened. We’re banned from Russia🥱…but the problems of 100 Canadians don’t amount to a hill of beans in this crazy world! We’ll always have Paris. Here’s looking at you kid. 😢☔️ https://t.co/yLtE0WwbNV

Political analyst and blogger of Ukrainian origin Ariana Gic, who was placed on the 97th position of the new Russian sanctions list, at a position right before Atwood also tweeted a commentary on the situation:

Moscow is truly delusional to think their sanctions matter to those of us who want their evil regime destroyed.”

Canada had started introducing Russia related sanctions on March 17, 2014, through amendments of the Special Economic Measures Act, “in order to respond to the gravity of Russia’s violation of the sovereignty and territorial integrity of Ukraine, and grave human rights violations that have been committed in Russia.”

These Canadian sanctions include asset freeze, export and import restrictions, and financial prohibitions. The list, which had been updated with new amendments over the last 8 years includes over 1,090 individuals and legal persons, including 32 new members added on November 10.