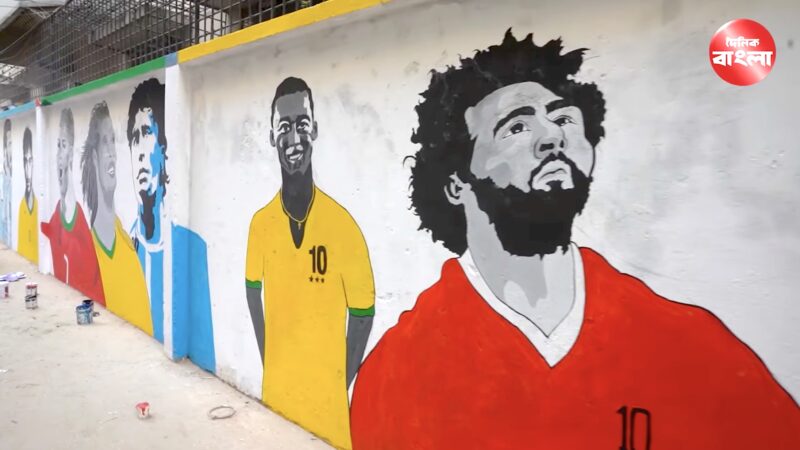 World Cup Graffiti on the wall painted by the locals at KM Das lane in Swami Bagh, Old Dhaka. Screenshot from the Facebook video of Dainik Bangla. Fair use.

The 2022 edition of the FIFA Football Worldcup, the most widely viewed sporting event in the world, commenced in Qatar on November 20. As football fever grips many nations, Bangladesh has also joined in the frenzy, as it does every four years.

Fans are hoisting flags of the participating countries on rooftops, painting graffiti of football players on walls, painting houses in Argentinian or Brazilian flag colours, showcasing kilometres-long strips of the flags of popular teams, and mass buying different team jerseys. There's also is a good chance that your favourite team's fan jersey, or their official jersey, was made in Bangladesh.

This year’s event in Qatar has been mired in controversy over the allegations of corrpution in the selection of Qatar as this year's host, and the deaths of over 6,500 migrant workers between 2010 and January 2021. One of the wealthiest nations in the world, Qatar has a population of about 2.9 million, of which over 70%—or 2 million—are migrant workers who have emigrated there to work in various sectors. Around one million migrant workers work in the construction sector, and around 100,000 of them were employed in the building of the infrastructure for this World Cup, including stadiums, sports villages, and roads. According to statistics published by The Guardian, 1,018 of the migrant workers who died were from Bangladesh.

Qatar has denied both the corruption allegations and that the migrant worker death statistics are World Cup-related, saying that the figure being quoted represents the overall deaths of foreigners during the period in question. FIFA has claimed that only 3 people died on construction sites related to the World Cup infrastructure, but a Deutsche Welle fact check reveals that the actual figure may be around 40, as the figures referring to fatalities in connection with the 2022 World Cup vary depending on whether the cause of deaths could be described as work-related.

Why are Bangladeshi football fans so attached to Brazil and Argentina?

Bangladeshis generally support an array of teams, especially those who have won previous World Cups. Judging from the flags flying from supporters’ rooftops, however, it's clear that the Brazil and Argentina teams enjoy a cult following, and there have even been reports of rival fans clashing because of their different allegiances.

Read More: Brazil or Argentina? Football Rivalries Play Out Thousands of Miles Away From the World Cup in Bangladesh

Bangladesh itself sits near the bottom—at number 192—of the FIFA world ranking and has not had any recent success in the football arena. In the absence of a home team to cheer on during the World Cup tournament, they throw their support passionately behind their favourite international teams.

Traditionally they support mostly Brazil (ranked number 1) or Argentina (ranked number 3) and there are many debates about why this is the case. This 2018 YouTube video by Plaantik explores the possible reasons Bangladeshis are more drawn to Brazil and Argentina than other teams but comes up with no clear answers.

According to the video, in 1982, state-owned Bangladesh Television began telecasting World Cup matches live, and colour TVs started to become popular. In the 1970s and 1980s, kids learned about Pelé and Brazil from their school textbooks and eagerly followed Argentinian superstar Maradona and his team's successes. A passionate fan following developed for the two teams over the following decades.

Read More: FIFA World Cup, Memories From The Past

One of the trademarks of the Bangladeshi football fans is the hoisting of flags of footballing nations on rooftops. Rafid Ishtiaque, an undergraduate in the department of economics at the University of Dhaka, tweeted:

Just a glimpse of the excitement of the people of this part of the world for the upcoming FIFA World Cup 2022 and their love for Brazil and Argentina! #Bangladesh #FIFAWorldCup2022 #FIFAWorldCupQatar2022@FIFAWorldCup @CBF_Futebol @afa pic.twitter.com/dIeyejxzzO

A man in Bangladesh sold his mango garden to arrange money to make a four-km-long flag of South Korea! The man supports this Asian side in the FIFA World Cup.

A cricket-crazy nation gets craziest during football World Cup! https://t.co/43kQAudTYD 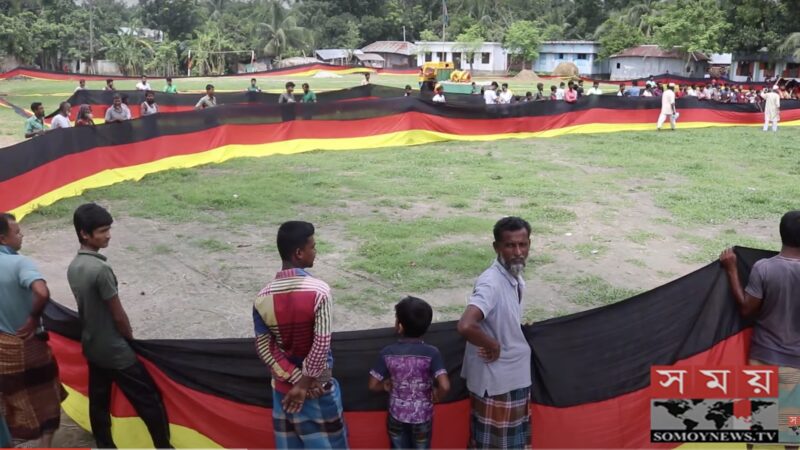 Longest German flag (5.5. km long) made by a Bangladeshi farmer as a tribute to the success of the German team. Screenshot from the YouTube video by Somoy TV. Fair use.

I'm Sure Most Of Them Doesn't Follow Much Football In 4 Year, But During #FIFAWorldCup 👀 @RoyNemer pic.twitter.com/2q4OpTmBYq

Niloy also tweeted photos of fans on the streets with rallies for their favourite teams:

Twitter user Fahmaan reports that a Rickshaw was painted with Argentinian colours.

Another salient part is the colourful graffiti on the streets and walls. Twitter user Md. Arafat Islam highlights a graffiti from old Dhaka:

During every #FIFAWorldCup, The Old Dhaka of Bangladesh goes into football frenzy. ⚽

Now I feels like football fans of #Bangladesh are getting ready for @FIFAWorldCup.

Kids In #Bangladesh Preparing The Walls Of Local Area With Different Graffiti, Paintings For Upcoming #FIFAWorldCup In Support Of #Argentina #Messi

The interesting thing is that the players on these teams had no idea about Bangladesh or these occult fan followings. But in the era of social media, some efforts are being noticed. For example, the Twitter account of Argentinian Soccer News shared several items from Bangladesh.

Argentina 🇦🇷 fans in Bangladesh 🇧🇩 rallying with a mammoth 🇦🇷 flag what they claim to be the longest 🇦🇷 flag in the world. pic.twitter.com/bwqJyiER8v

A son in Bangladesh 🇧🇩 who is an Argentina fan went on a hunger strike for dying the whole house in Albiceleste colour 🇦🇷 and the father had to fulfil his wish. He has 2 daughters who are Brazil 🇧🇷 fans and will have to dye his other house in Selecao colours. 😅 World Cup Craze. pic.twitter.com/YGOICuGICJ

Although Qatar has claimed that the authorities have made significant labour reforms, Human Rights Watch says that these were put in place mostly after 2018, when World Cup-related construction was mostly finished, and that many workers who helped build the World Cup infrastructure did not benefit from the reforms and compensation mechanisms.

Journalist Shafiqul Alam, the Dhaka bureau chief of AFP, visited some Bangladeshis who worked on the construction of the stadiums in Qatar. He recounted the story of one worker, Atiar, on Facebook:

Atiar is one of the thousands of workers who made the stadium but were not paid their dues. . . . Atiar wants you not to watch the matches, for he is sure that these stadiums are made on the blood of the migrant workers. “Watching the matches will be a betrayal of our blood. Every stone and every brick in the stadium is stained with our blood and sweat. And yet, many of us were not paid a single rial. We worked under 55 degrees celsius scorching sun. We went without food for days. We spent nights on the beaches. Yet, the authorities did not find out who among us was paid for work. When we staged protests, they sent police to go after the organisers.”