A decade on, Sumatra’s ‘tusk force’ keeps the peace in famed national park 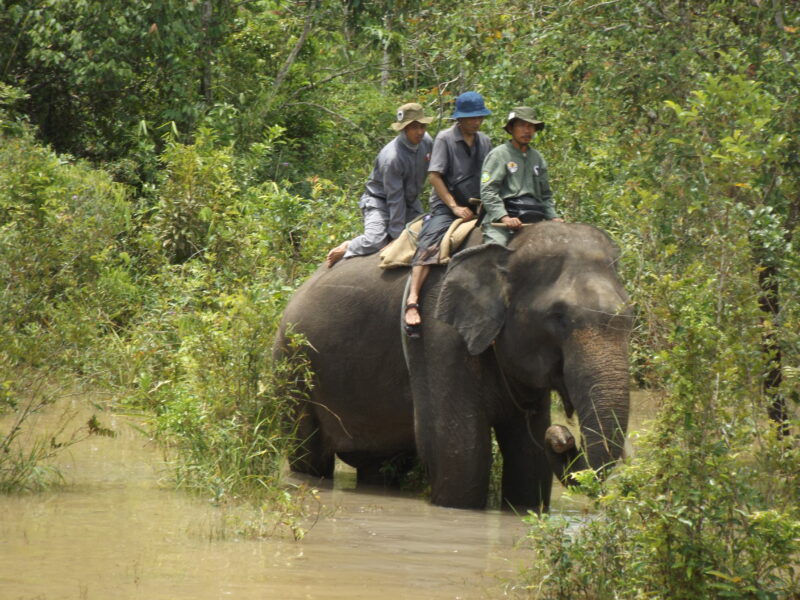 Three meters above a jungle trail, the mahouts slowly rock and sway atop their elephants — inspecting the mud and thick grass below for signs of wild elephants and traps and snares set by poachers.

Masrukin and Edi Sutrisno, mahouts with the Elephant Response Unit (ERU) in Indonesia’s Way Kambas National Park (WKNP), emerged from the bush after a three-hour patrol with their elephants Karnangin and Karnangun.

“We love elephants and we don’t want to see them go extinct,” Masrukin, 53, told Global Voices during a recent visit to WKNP, one of Indonesia’s biggest national parks.

Over the past decade, the ERU has deployed response teams in the park and led village education campaigns to mitigate human-elephant conflicts (HECs) fuelled by the conversion of lowland forests to farmland, which pitted farmers against elephants in search of food in their former habitats.

Now, along with its ongoing HEC-prevention activities, the ERU is tackling other threats to the region’s biodiversity — from illegal hunting and poaching of wildlife to over-harvesting of non-timber forest products and uncontrolled forest fires.

“The ERU method is those wild elephants are driven away by tame elephants. The well-mahout mentality is normal to control tame elephants to deal with wild ones. But, it will not be able to increase the population of wild animals if the conversion of forest functions is still high,” said Nazaruddin, who received an award from the President of Indonesia Joko Widodo (Jokowi) as an outstanding mahout in 2018.

“We hope that mahout assistants can empower as workers in the Ministry. We need mahout assistants because civil servants’ mahouts are over 40 years old. Automatically they have to regenerate, and it's not easy,” he added. It takes at least three years to become a mahout, says Nazaruddin.

Way Kambas National Park covers 1,300 square kilometers of rainforest and coastal swamps in Lampung province on the southern tip of Sumatra. The park is home to more than 400 bird species and 50 species of mammals, including the critically endangered Sumatran tiger, rhino, and elephant. 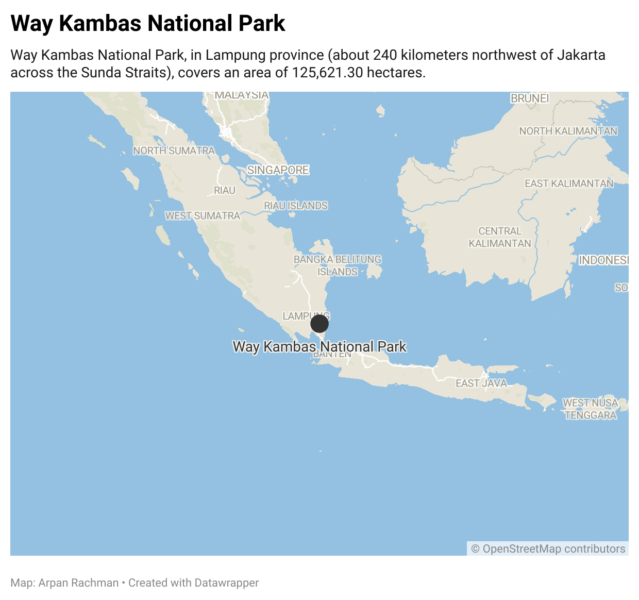 Faced with dwindling habitats, elephants often encroach on farmlands in search of food. Villagers, seeing a threat to their livelihoods, have been known to capture or kill wild elephants, despite their protected status under Indonesia’s wildlife laws.

By 2011, the International Union for Conservation of Nature (IUCN) put the Sumatran elephant on its “Red List” of threatened species. That same year the first of four ERU base camps opened in WKNP, which is now home to 185–210 wild elephants.

Nazaruddin, whose love of elephants began 40 years ago when he cared for a baby elephant rescued after falling into a well, said managing human-elephant conflicts has evolved since the early 1980s. At that time, efforts like the Tata Liman Operation were limited to herding wild elephants back into protected national park areas but rarely educated villagers on the role of elephants in a balanced ecosystem.

Since then, the ERU has conducted regular patrols using tame elephants trained at the WKNP elephant training center and recruited young mahouts from nearby villages. A big part of their job is still coaxing wild elephants away from crops and villages, but there is now a serious education effort.

It involves training community groups on HEC mitigation strategies, building guard towers, and watching posts along the park border, which have made it easier to monitor wild elephant movements and respond if needed.

“The community is educated and involved in ERU,” said Nazaruddin, who is WKNP’s Head of the Regional II Way Bungur National Park Management Section.

He is also head of the Indonesia Mahout Communication Forum, an online gathering place for the country’s more than 500 mahouts.

Aside from the ERU, mahouts are employed at elephant training centers, national parks, and zoos. At WKNP,  Nazaruddin and 14 other mahouts work in the park alongside 32 mahout assistants, who are mostly youth from buffer zone communities who receive training from the ERU. 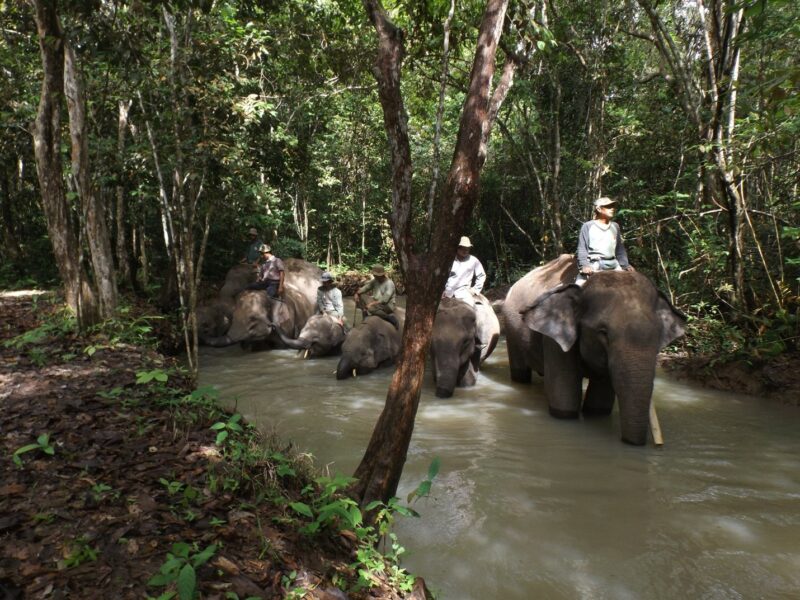 A patrol of six elephants from ERU Camp Tegal Yoso takes a morning bath with their mahouts. Photo by Andi Aisyah Lamboge, used with permission

ERU operates four camps in WKNP, where 27 elephants and their mahouts patrol the park borders and work with local communities.

On a typical night, the mahouts and villagers can be on guard duty for many hours. When an elephant emerges from the forest, they use flashlights, swing fireballs made of coconuts and kerosene, and set off noise-making bamboo cannons or firecrackers to warn them off.

Nazaruddin’s job often takes him on the road to defuse human-elephant incidents.

Last month, he jumped into his truck and drove 44 km from his home in Raja Basa Lama to the northeast village of Tanjung Tirto. A farmer had seen a herd of wild elephants plodding toward his rice field and immediately alerted the ERU through its WhatsApp chat group.

Nazaruddin arrived an hour later and, together with the farmer, drove the elephants back into the forest. 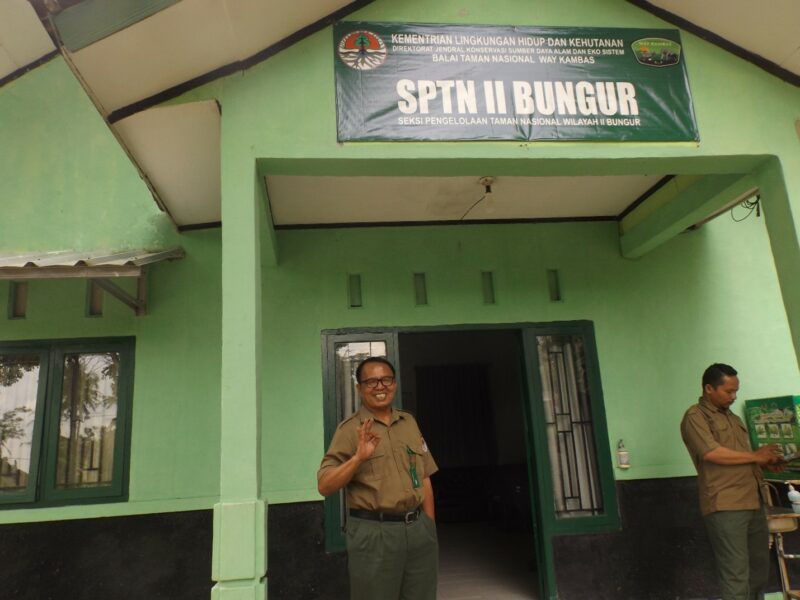 Nazaruddin (wearing glasses) stands in front of his ERU office, accompanied by his colleague Nurhadi. Photo by Andi Aisyah Lamboge, used with permission

Tanjung Tirto is among nine villages in the national park buffer zone where elephants in search of food often destroy farmers’ fields. Educating communities on how to safely handle these encounters is a priority for ERU, said Nazaruddin, who spoke recently at a town hall in the village.

The meeting with 30 residents focused on developing a joint plan for handling interactions between elephants and the villagers. During the meeting, Surono, the village secretary, said it was important for the community and forest conservation authorities to work together.

Sofyan, a member of the Community Partner for Forestry Police (MMP), told the meeting more fireworks were needed to warn off encroaching elephants.

ERU member Muhammad Jazim Nasruddin said incidents involving human-elephant conflict in the area had dropped 60 percent since 2011, along with fewer damaged crops as a result of community members working with the forest police to drive away elephants. 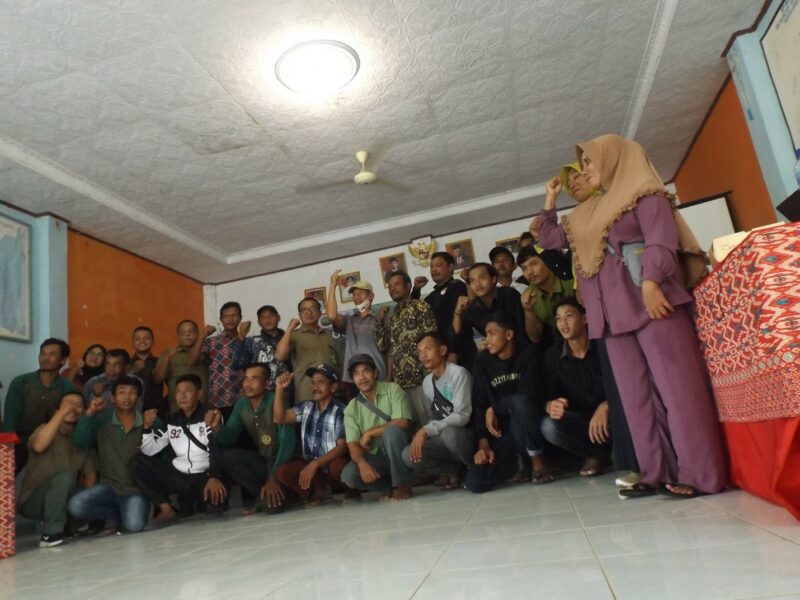 Attendees at a meeting in Tanjung Tirto Village pose for a picture after discussing local strategies to mitigate human-elephant conflict. Photo by Andi Aisyah Lamboge, used with permission

Some rice fields around Tanjung Tirto are adjacent to the forest and are often the scene of human-elephant incidents, said a leader of the local Forest Farmers Group. FFGs have been leading actors in social forestry programs across Indonesia since the 1970s, sometimes acting as mediators in disputes over forest use and local communities.

“We cannot avoid conflict, so it is vital that we improve farmers’ understanding of the elephants and how to properly handle elephants when they enter the rice fields and villages,” said Firdaus Armansyah of FFG Way Nusantara.

Technology is also playing an important role in the ERU’s activities, including GPS devices to track the movements of wild elephants.

“The GPS collar makes it easier for us to monitor the movement of wild elephants and determine where they are and warn villagers,” he said, adding they have had success tracking large herds of 15 elephants and plan to monitor smaller groups in the future.

Research is also underway to use sound detection technology to locate wild elephants and alert communities to their presence, said Muhammad Ali Imron, Head of the Wildlife Laboratory at the Faculty of Forestry, Gadjah Mada University.

The technology aims to detect the sound of elephants in the forest and send an alert via mobile phone to, for example, a local conservation officer who can work with the community to mitigate a potential conflict, Imron said.

“We are using bioacoustic technology and artificial intelligence to detect elephant voices,” Imron said, adding that elephant sounds have specific characteristics that in some cases cannot be heard by the human ear. 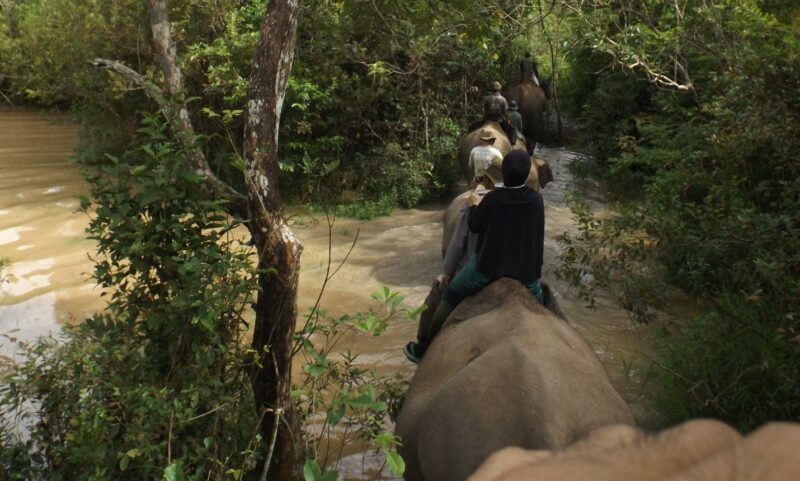 An elephant patrol from the ERU Camp Tegal Yoso crosses a river. Photo by Arpan Rachman

This story was written and produced as part of a media skills development program delivered by the Thomson Reuters Foundation. The content is the sole responsibility of the author and the publisher.