KRIK will contest the verdict in the Appellate Court 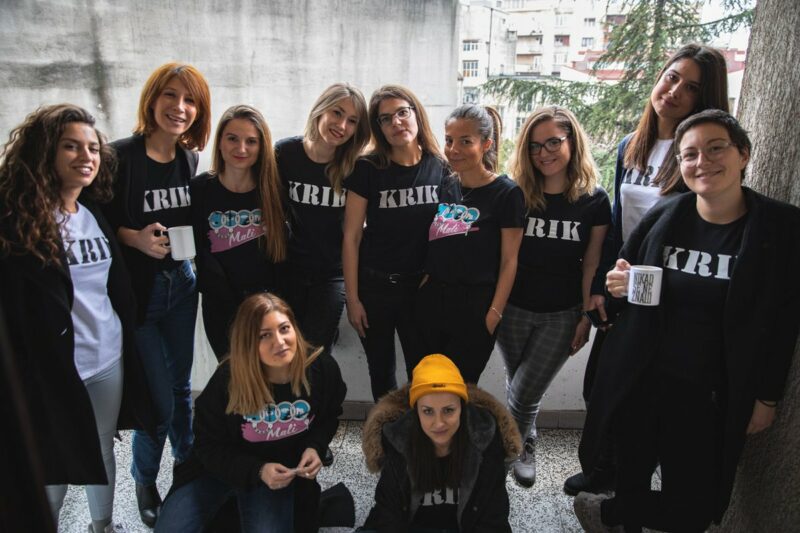 Just a few days before receiving the EU Award for Investigative Journalism in Serbia 2022, the Serbian investigative media outlet KRIK was sentenced in a SLAPP defamation lawsuit by a Serbian court for publishing news about a criminal trial, quoting the defendant's claim that a criminal gang had ties to the Interior Minister.

Media freedom organizations, such as the Journalists’ Association of Serbia, International Press Institute, European Federation of Journalists (EFJ), Coalition for Media Freedoms and SEE Check Network, as well as lawyers and opposition politicians, expressed concern or outright condemned the verdict. Independent media outlets Danas, N1, Nova, Cenzolovka, Glas Šumadije, JUGpress, Autonomija and Žiginfo expressed their solidarity by republishing the KRIK article that was the subject of the court case initiated in May 2021.

Meta.mk spoke to KRIK journalist Milica Vojinović, the author of the article and recipient of numerous professional awards including the CEI SEEMO Award for Outstanding Merits in Investigative Journalism 2021. She explained the importance of this case in an email statement:

The verdict sentencing KRIK for defamation, i.e. injuring the honor and reputation of Bratislav Gašić, the recent director of the Security Intelligence Agency (BIA) and current minister, represents a very dangerous precedent for journalists in Serbia: namely, this is the first instance where news reporting from a trial has led to being sued and now sentenced. Gašić was mentioned during  that trial in a context with criminals. Even though, during our trial, the  judge determined that we have accurately reported what had happened, she still convicted us because the information, and our additional truthful explanation, allegedly injured Gašić. She even stressed that the fact that Gašić is a state official represents  an aggravating  circumstance for us! In a democratic state the situation should be reverse; public officials need to be more susceptible to criticism than other citizens.

Bratislav Gašić has held the post of minister of internal affairs of the Republic of Serbia since October 26. He is one of the founding members of the ruling Serbia Progressive Party (SNS), and was its vice president from 2012 to 2016. He also held the offices of mayor of Kruševac (2012–14) and minister of defence from 2014 to 2016. He was fired from that post after his public sexist insult towards a female journalist caused a scandal. About year later he was appointed the head of the Security Intelligence Agency (BIA). After his recent appointment as interior minister, he was also appointed as a member of the government’s new gender equality body.

According to Reporters without Borders Press Freedom Index 2021, journalists in Serbia “are threatened by political pressures and impunity of crimes committed against them.” Vojinović said that the consequences of this verdict against KRIK can further deteriorate the already worrisome level of media freedoms in the country.

This decision is very dangerous because it creates an atmosphere in which journalists would be concerned that they can suffer similar consequences like KRIK for their daily reporting from the courts or other public events, even though they would faithfully inform the public about what has transpired. This can lead to self-censorship by journalists, and further suffocation of the freedom of media, reducing the opportunities for citizens to receive important information.

Another important fact about this case is that the judge Nataša Petričević Milisavljević has admitted to having close ties with Minister of Labor Nikola Selaković, an important member of the ruling party SNS, affiliated with plaintiff Gašić.

Within her judgement the judge listed very contradictory reasons for her sentence, practically accepting only the arguments brought out against KRIK. Editor-in-chief of KRIK Stevan Dojčinović explained that:

[The verdict] does not question the veracity of the wiretapped conversation that the journalists published; it is also claimed that journalists have the right to explain things to their readers — but at the same time the KRIK’s editor and its journalist were convicted precisely because they explained to the readers the meaning of the expression “on the cauldron” that was used in the said conversation. The more scandalous part of the verdict is that the fact that Bratislav Gašić is an official is taken as an aggravating circumstance against the journalists — instead of being the other way around.

KRIK announced that it will contest the verdict by filing an appeal in the Appellate Court. While hoping that the damning verdict will be overturned, KRIK journalists also announce that they intend to continue their work of professional reporting and to continue investigating organized crime and corruption in all important actors, including those who had already sued them.

At the moment KRIK is fighting 11 lawsuits, including the one by Gašić. Most of these procedures started before December 2021, when several media freedom organizations, including Article 19, EFJ and European Centre for Press and Media Freedom (ECPMF), warned that the wave of SLAPP lawsuits against KRIK have chilling effect on media freedom in Serbia. Initiated by powerful figures close to the Serbian ruling party SNS, these procedures are cumulative, requesting over RSD 90 million (more than USD 800,000)  in damages — three times more than the media outlet’s annual budget.