East African runners are the world’s best, yet they still struggle with media interviews 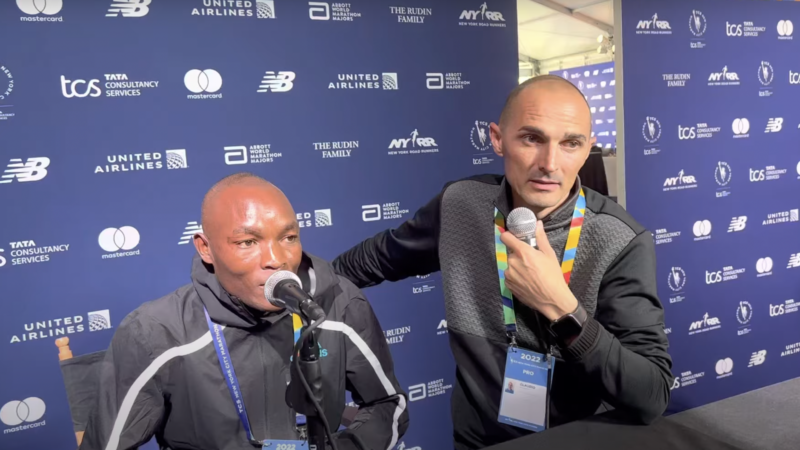 A YouTube screengrab of Kenya's Evans Chebet with his coach (turned interpreter) at a pre-race interview ahead of the New York City Marathon in November 2022. Image source; Letsrundotcom

When Kenya’s long-distance runner Evans Chebet spoke to journalists ahead of, and after his New York City and Boston Marathon races, his interviews broke the language mold. Chebet who won both races — the New York City a few weeks ago and the Boston in April this year — gave his media interviews in the language that was most comfortable to him, Kiswahili.

His choice of Kiswahili over English, which has been the standard, has elicited many positive reactions from Africans online, with many expressing their pride and joy. Many even called on other runners to emulate him.

Kiswahili is the most widely spoken language in Kenya. In 2019, over a quarter of the population surveyed spoke Kiswahili as their primary language. It is also one of two official languages. Taught alongside English in schools, most Kenyans, especially in rural areas, speak Kiswahili fluently as a second or third language.

East African runners are among the world’s best and have dominated ever since they burst on the scene at the 1968 Mexico City Summer Olympics. Kenya and Ethiopia, another country with a variety of native languages, are neck and neck to earn the designation of the country with the best marathon runners. According to Global Sports Matters, a Kenyan or Ethiopian has been the men's winner of the Boston Marathon 26 times out of 29 from 1991 to 2019. For women, these nationalities took first place 21 out of 24 times.

For Chebet and many runners from East Africa, many of whom come from the Nandi (Kalenjin) in Kenya and Bekoji in Ethiopia, the two countries which have consistently produced the world’s best runners, their first language is Kalenjin and Amharic respectively.

The NYC and Boston marathons are part of the Abbott majors- a series consisting of six of the largest and most renowned marathons in the world: Tokyo Marathon, Boston Marathon, TCS London Marathon, BMW Berlin Marathon, Bank of America Chicago Marathon, and TCS New York City Marathon.

So why have the race organisers, especially at the Abbott World Marathon Majors, never considered having professional interpreters, especially for the Kiswahili, Kalenjin, and Amharic languages? Is it their responsibility or does that fall on the athlete's national governing bodies?

Based on many of the reactions online, the time has come for race organisers to consider this as athletes embrace giving speeches and interviews in their native languages.

East Africans online, not just from Chebet’s home country, have hailed him for glorifying Kiswahili in his pre-and post-race interviews, particularly at the recently held New York City Marathon.

Some of the comments in a YouTube video of his Boston Marathon posted by CBS Boston read:

This is so amazing, we should be proud of our language than to (sic) struggle with English. I'm so proud of you Evans Chebet. The rest of (the) athletes should emulate him. He his(sic) a good example ☺️ . by Mercy Rotich

In his Twitter post with a video of Chebet’s post-race interview, Ja Nyakach said “That's the way it should be.”

This is part of Africa rising phenomenon… Language is very key to a people's identity. Kiswahili is being taught in many Africa universities , China and South America…

At hand was an interpreter, his coach in the pre-race and a volunteer, in Chebet’s post-race remarks in New York. It was however quite clear that both the coach and the volunteers at the New York City race were struggling with the language.

Whilst congratulating Chebet and sharing their pride and respect in, not just his win but also for his remarks in a language they identify more with, many made fun of the interpreter who, due to her lack of a command of the language, in some instances used wrong words such as ‘mashindo’ to mean ‘Mashindano.’ There is no such word as ‘Mashindo’ in the Kiswahili language. Mashindano however is the Kiswahili word for race. Many even called her a fraud.

Some like Frederick Muitiriri a former police officer and TV anchor noted that he has always advocated for Kiswahili interviews, something that he believes enables the runners to express themselves authentically and not how they are conditioned to. Mutuiriri even offered to provide his translation services free of charge.

Mashindo what? 😂😂Take me there, I'll interpret for freee 😂😂😂What did I hear? And yesss, I've always advocated for Swahili interviews. That way, our athletes can express themselves the way they want and not how they are conditioned to say. Also, Kiswahili kitukuzwe!

As Olech noted in his reactions to the video of Chebet’s interview posted on Twitter, he was glad that the runners were finally beginning to recognize the power they hold. He said: “Why should they (the runners) struggle when running and also struggle when granting interviews?”

Even as many took pride in being Kenyan and in Chebet for his insistence on using Kiswahili for his interviews, others felt that he ought to have spoken in his mother tongue Kalenjin which, many believed, he would have been far more comfortable in than Kiswahili.

“ Way to go, next time, may the winner do it in (their) mother tongue,” said Twitter user Kevin Ochieng.

Despite their dominance of these major races, many Kenyans and Ethiopians struggle to express themselves in English.

Ethiopians have made some strides forward to gain more access to translators. Sabrina Yohannes, a journalist who has written numerous articles on distance running for various global sports and news publications, has become a famed Amharic translator for Ethiopian athletes.

While responding to questions from the media during a past athletics event, World Marathon champion Eliud Kipchoge questioned why Kenya has never had an interpreter in major races.

“It is high time that AK train individuals to interpret our local languages because sometimes upcoming athletes may suffer communication breakdown,” he said.

The calls to Athletics Kenya for an official interpreter were made in 2019. Three years later, as seen recently at the New York City Marathon, the country still lacks its own Yohannes.

Many are now challenging race organisers to bring some diversity to the official race language, especially because Africa, particularly East Africa, dominates.