Is Hong Kong really “back in business” from COVID-19 control rules? 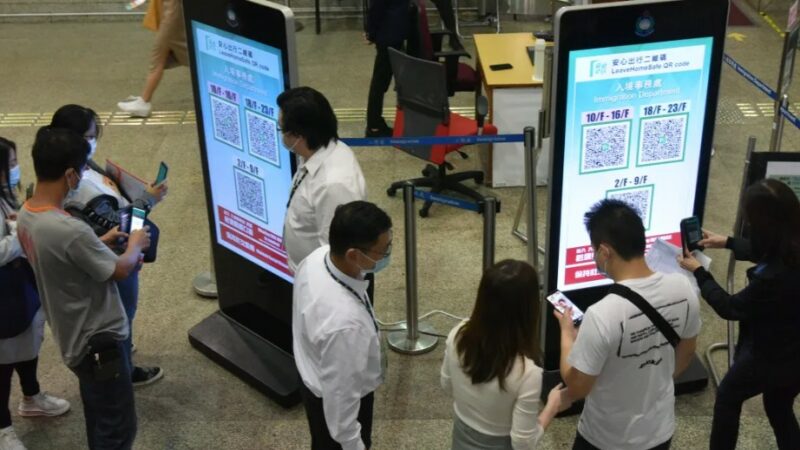 People are required to use the LeaveHomeSafe app to enter the Immigration Tower in Wan Chai. Photo: GovHK via HKFP.

With COVID-19 restrictions banished to the history books across the world, Hong Kong Chief Executive John Lee has told business leaders that the city is “onstage again,” whilst his finance chief declared the city “back in business.”

Yet the reality on the ground suggests anything but, with strict social distancing rules still in full swing and the health chief this week insisting the city is still facing a “public health emergency.”

Across the border in mainland China, Beijing has doubled down on its commitment to zero-Covid policies, despite announcing the easing of some rules on November 11. In Hong Kong, there is no timetable for lifting curbs and the economy is now feeling the pressure, the government revealed that GDP had fallen 4.5 percent since a year ago.

Nevertheless, the financial hub has a proven record of bouncing back, as Lee said at the landmark bankers’ summit last week. But is it premature to claim normality is returning when arrivals to the city are still down 97 percent compared to three years ago?

HKFP reviews the remaining social distancing rules still in place — some of them forgotten, some of them bizarre — as medics question the science behind them and the public increasingly questions the need.

Masks must be worn in public places, including shops, or residents risk a fixed penalty of HKD 5,000 (about USD 640). The government has allowed exemptions for those exercising outdoors or in gyms and sports stadiums, but not for smokers.

The city’s leader has indicated that face coverings are here to stay: “Masks will stay on because I think all experts have indicated masks [are] important to control the spread of the disease,” Lee said this week. But some experts, such as epidemiologist Ben Cowling, have said there is little scientific reason for the requirement at this stage in the pandemic.

Gatherings of more than 12 people are banned in public places. Groups must also remain at least 1.5 metres apart. Local tour groups are limited to 30 people, or 100 people if all tourists have undergone a rapid test. Violators face a HKD 5,000 (about USD 640) fixed penalty.

Since February 24, residents must show proof of vaccination via the LeaveHomeSafe tracing app to enter venues such as supermarkets, malls, schools, government offices, hospitals and other venues.

Those who have had three doses of a COVID-19 vaccination — or two if they received their second jab less than five months prior — will receive a blue QR code in the app to allow entry. Infected patients will have a red QR code, and inbound travellers receive an amber code, barring them from most venues.

In September, the Vaccine Pass was expanded to children as young as five, who must have received at least one COVID-19 vaccination to enter a number of types of premises.

Visitors to Hong Kong must fill in a government health declaration form and show a negative rapid test in order to board a flight. Travellers must perform daily rapid tests and four PCR tests during their first week in the city during a “self-monitoring” period. The PCR tests are conducted on the day of arrival — day zero — and again on day two, day four and day six.

If any tests return positive results, the visitor will be served with an isolation order. Depending on their living circumstances, they may be forced to go to a government quarantine camp.

Teachers, healthcare workers, care home staff, musicians at live music venues and catering staff are among those who must undergo regular COVID-19 tests.

Those residing in areas of an outbreak defined by the government can be made to undergo a compulsory COVID-19 nucleic acid test. Fixed penalties of HKD 10,000 (about USD 1280) are imposed on those who fail to undergo a test.

Eating and drinking are to remain banned on Hong Kong public transport, the Health Bureau confirmed to HKFP last week. The department said that the rules were “science-based and targeted.”

While consuming food and drink was always banned in paid areas of the MTR, it was previously allowed on many ferry routes.

Only 12 people are allowed at each restaurant table, with screens or distancing still imposed to allow space between groups.

At catering premises, when diners are away from a table, they must not consume food or drink and must wear a mask. The LeaveHomeSafe app must be used when entering the venue.

Up to 240 people may attend a banquet, though they must undergo and show proof of having taken a rapid test within 24 hours to attend.

Aside from using the LeaveHomeSafe app, those wishing to enter bars or nightclubs must show a photo of a rapid test performed in the past 24 hours with their name and date written on it. Venues may only fill to 75 per cent capacity, and a maximum of six patrons may sit at tables. When revellers at bars are away from a table, they must not consume food or drink and must wear a mask — including when dancing.

Most performance venues are restricted to operating at 85 per cent of their capacity.

Various restrictions have been imposed on recent public events, while some have failed to gain approval altogether. The Hong Kong Marathon was axed and then rescheduled for next February. The cross-harbour swim was allowed to take place but was limited to 1,500 swimmers.

Public swimming pools may only welcome swimmers up to 50 per cent of their capacity, whilst the capacity of other outdoor venues is also limited, including in spectator stands.

Cinemas, performance venues, museums, event premises and religious premises may only fill their premises up to 85 per cent capacity.

Water dispensers at all public leisure grounds have been suspended since January 29, 2020, and remain taped up.

All Hong Kong students must obtain a rapid test to enter school grounds.

Full-day in-person classes were suspended for primary and secondary students in August 2020. Secondary schools must achieve a 70 per cent double-vaccination rate among pupils before they can apply to resume full-day classes or offer after-school extracurricular activities. The same applies to primary schools from December 1. There are no plans to resume full-day teaching at the kindergarten level.

Depending on the severity of symptoms, those who report a positive test result to the government may be sent to a hospital, or a community isolation facility, or may be allowed to isolate at home under the StayHomeSafe scheme. They must also wear an electronic tracking bracelet. Unvaccinated patients will remain at home for two weeks, whilst those who are jabbed may leave if they test negative on days six and seven.

Close contacts of infected people in a household may also undergo home quarantine. However, those who live in subdivided flats, or do not have a functional flushing toilet or hand washing facility, or who live with high-risk individuals, may not be allowed to isolate at home.

Other authorised officers — such as those from the Agriculture, Fisheries and Conservation Department and Food and Environmental Hygiene Department — are also empowered to impose fines.