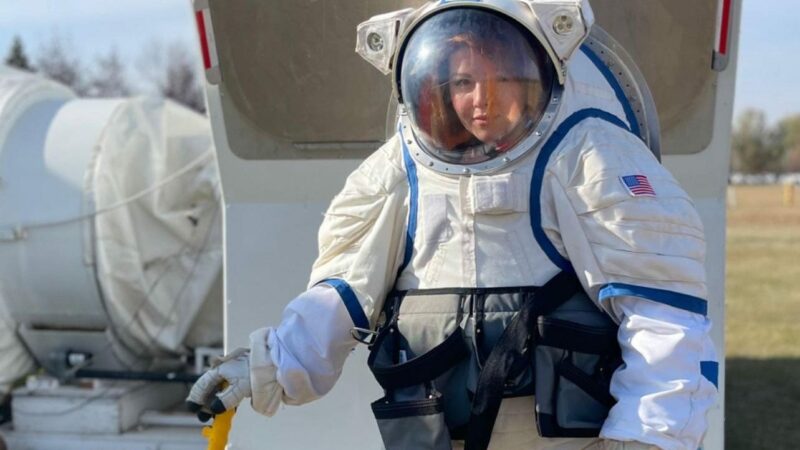 Martina Dimoska. Courtesy photo republished by Meta.mk with her permission.

Martina Dimoska is the first female analog astronaut from the Balkans. As a graduate student at International Space University, she's working towards becoming the first from North Macedonia to obtain a master's degree in Space Studies. She is the NASA Space Apps Challenge Local Lead for 2022, hosted in two prestigious historic locations: Mountain View in Silicon Valley, California, and Cleveland. This is an annual partnership with NASA Glenn Research Center in Ohio, and co-organized by NASA Space Apps Challenge Strumica in her home country.

Dimoska is from the small city of Kičevo. In 2015, she was recognized as the most successful student at the Faculty of Technology & Metallurgy in Skopje and the youngest patent holder in North Macedonia.

She recently spent 21 days “closed” down in a simulated environment of Mars analog habitat, with a 20-minute delay in communication with Earth in each direction. In this interview with Meta.mk, Dimoska talked about what it means to serve on an analog mission, her current research, and future plans.

Meta.mk: What is an analog mission and what is your role in it?

Martina Dimoska (MD): The analog astronautic missions prepare us for future explorations of asteroids, the Moon, Mars and other planetary bodies. It's very expensive to conduct research directly in outer space, so it would be very dangerous and stupid to begin them before we undergo extensive testing, research and simulations on Earth. These [ground] research efforts are of enormous value to the  scientific space community.

By testing new scientific experiments during analog astronautic missions we save money, resources, equipment and labor. It allows the development of control studies, especially for manned space flights, as well as countermeasures that can be tested during these missions, before testing them in outer space.

Astronauts regularly use analog missions during their training, so they can prepare for the different way of life, isolation and extreme conditions in outer space. Often these missions have a very hard and grueling schedule, trainings and preparation, and include many scientific experiments. The analog astronauts are deprived of a normal life, and the crew, consisting of few people, is in charge of autonomously running the whole habitat. One can explain it with the analogy of doing a military service, when one is removed from civilian life and has to fit into the discipline of a hierarchical system.

A the moment I'm serving as science officer in the 14th mission at the University of North Dakota (UND) Inflatable Lunar-Mars Analog Habitat (ILMAH) financed by NASA. We are “locked down” for 21 days, completely cut off from the world with with an appropriate time lag of 20 minutes each way, to account for the 63.4-million-mile distance between Earth and Mars.  In this Martian scenario, our crew, which includes two more members, mission commander Tarun Bandemegala and flight engineer Pranika Gupta, is conducting research for an extended Mars mission, with experiments ranging from drone flights to field testing of new type of space suit.

Meta.mk: Do you consider this an exciting experience, being the first woman analog astronaut from the Balkans?

MD: I have to admit that the work is really hard, because besides my obligations on the mission I have to do my engineering work.  I am also tasked with giving interviews and creating social media content. Nevertheless, I am very glad that I finally open a trail for the future generations of young people from our region who want to become part of such scientific experiments. I waited a long time for this experience, it took a lot of time for it to happen. The journey that brought me to this position was enriched by all the experiences and trainings I underwent in previous years.

My applications for analog missions had been accepted before, but they couldn't fit into my schedule. However, after I started my master's studies at the International Space Institute, my professors significantly widened my range for analog missions, giving me an enhanced overview of the sector, so I could distinguish between populist projects and projects which actually cooperate with space agencies and provide meaningful contribution to science. Therefore, I could make better decisions where to apply in line with my career path and future development.

Meta.mk: What kind of research do you do while on this mission?

MD: As part of my team I am responsible for several kinds of research. For instance, collecting EEG data by scanning one's brains with electroencephalography methods. We use such research to observe how isolation and long range space flight might influence cognitive decay and memory recall.

Another kind of research is about continuously maintaining communication via the  online system ECHO, which takes 20 minutes one-way and 40 minutes two ways. Due to their distance, Mars and Earth have communication delay of between roughly 5 to 21 minutes, depending on their position while they orbit around the Sun. In order to conduct our urgent daily tasks and solve some important problem, we need to be efficient, quick and patient, and very, very calm and composed.

We are also conducting a study of exercise in a special suit measuring our vital signs, called CardioBreath. This is scientific cooperation developed by the Simon  Frasier University in cooperation with the Canadian Space Agency, NASA and University of North Dakota. The same suits are used on the International Space Station (ISS). Other research includes modules for plant growth, where we sow fast-growing seeds intended for space travel, as well as microgreens, and we use Hamama systems.

We also have an ЕxoLab device which “captures” the carbon dioxide intended to help maintain life on Earth as well in outer space. There's a plan to launch such devices to the ISS on November 15 and compare the research results from Earth and from outer space. We are also conducting field testing of an improved version of the UND NDX2-AT EVA space suit, used for venturing outside of vehicles i.e. for Space Walks.

During the mission, we also use a rover for additional excursions to collect samples, map terrain for future  development of the habitat, and examine geological samples in a geology lab. We also conduct microbiology, 3D printing and other experiments, some of which are classified. We undergo daily testing, psychological questionnaires, problem solving in life threatening situations, and a very strict schedule to follow.

Meta.mk: What are your future professional plans?

MD: I would like to establish a more serious cooperation between our country and the institutions that I have been cooperating with as an individual, in order to enrich our collective knowledge and participation in the space industry. I already have an active team and we recently founded the International Space Alliance. My key focus in this period is the private space sector, and, alongside realizing my potential as an engineer, I actively follow other accomplishments, but especially analog missions.

You can learn more about Martina Dimoska's her journey into the aerospace industry, her scientific investigations through analog missions, and the Martian Analog Habitat from this video by IgnitedThinkers: