Turkey remains a transit destination for some. 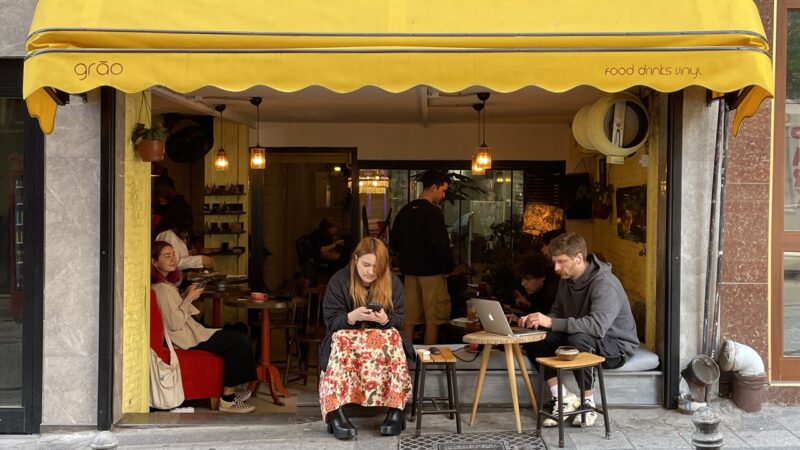 In a lively neighborhood of Istanbul's Kadikoy district, Grao Cafeteria is nestled in between local shops and restaurants. Grao's owner is 32-year-old Igor, native of St. Petersburg. He arrived in Istanbul in March 2022 after a year of traveling abroad, visiting India, Nepal and Thailand. After a few months in the city, together with a friend, Igor opened Grao in August. “I like it here,” Igor told Global Voices in an interview, “people are friendly.” But Grao is more than just a cafe. There is a sense of community, perhaps a purpose. It has quickly became a popular hang out spot for newly arrived Russians, and those who have lived here for a few months. The cafe also has a second floor where its owner, together with other community members, holds Turkish language classes once a week, discussions for newcomers about how to obtain a residency permit, apply for a tax number, and understand local cultural nuances. The next event is scheduled for November 12 and is organized by a group called “Station Change” or “станция смена” featuring a diverse group of speakers for the newcomers but also those who have lived in the city and is eager to meet new people. According to the Instagram post:

The long-awaited event in Istanbul for those who have recently relocated or have long lived in Turkey and are looking for new friends 🙌 This month we will gather in Istanbul and share not only the important points of moving to a new country, but also simple human warmth , inspiration and motivation for change 💛 In the program: 🐾Co-founder of the project Nikita Kuimov @nikitakuimov will talk about community and how travel and community help him live his dream life; 🐾 Alena Medvedeva @ale_medvedeva shiftmaker, blogger and YouTube producer will share a checklist for moving to a new country (documents) , useful links and lifehacks, how to set up a routine); 🐾 Shifter Masha @promokash and host of tg-channel about Istanbul will tell you about the features of the city and its diverse districts.

This is not Igor's first visit to Turkey. He has been here three times before. But this trip was different. “I arrived here, to gather information and then decided to open a cafe.” Igor managed a few bars in St. Petersburg so had ample experience in venue management. In his time here, things have generally been working out. “Everything went horizontally,” explains Igor. Through friends and acquaintances they found the space for the cafe, and the flat where he currently lives, not far from the cafe. “Turkey is not that much different from Russia in that sense,” Igor told Global Voices.

What is different however are the people. “I like it here. The simple human interaction — I get greeted every day on my way to work by the neighbors. There is sense of neighborhood. There is a lot of energy and I like that. Even our real estate agent, who speaks no English or Russian is helpful.”

And although it has so far worked out for Igor, the journey was not easy. “Sometimes it feels strange. All of your past experiences, your background that you have accumulated up until now no longer is relevant. So you have to start from scratch. But it is interesting experience. At the age of 32 you are building your own persona anew.”

It is not entirely clear how many Russians have arrived thus far in Turkey since Russia's unprovoked invasion of Ukraine. According to the governor of Antalya province, a popular sea resort destination for Russians, since Putin's announcement of partial mobilization, the daily number of Russians arriving to Antalya has reached 19,000. The Ministry of Tourism indicates that some 800,000 Russian citizens arrived in Turkey in September. According to the Ministry of the Interior, as of data on November 3, 2022, Russian citizens are the second highest number of foreign residents residing in Turkey on long term (115,365) and short term (95,431) residency permits, after Iraqi nationals. According to reporting by Daily Sabah, investment by Russians in the housing market in Turkey increased by 199 percent in the first two quarters of 2022.

The high number of arrivals vs. the lower number of those who are applying for residency is not surprising. “A lot of people have arrived in Turkey since the invasion and after mobilization. But many see it as a temporary location. Just as many who have no idea what to do next,” explained Igor.

Among those who are currently in Turkey are artists too. Some are passing through like rapper Oxxxymiron and Zemfira; others like Evgeny Grinko, who keeps touring Turkey as well as neighboring countries, and Petr Rodionov are choosing to stay. Rodionov recently performed at Piano House. The concert was accompanied by Ivan Chepura of the Maly Drama Theater reading poetry from famous Russian authors. Each of these artists have voiced their criticism of the war. In March, Oxxxymiron in a video message shared via his Instagram, said, “[The war in Ukraine] is a catastrophe. It is a crime. This is why I am postponing all six concerts for an indefinite time. I cannot entertain you while Ukraine is bombed by Russia. While residents in Kiev are forced to hide in shelters, while people are dying.” In October 2022, the rapper's name was added to the infamous list of “foreign agents” in Russia. During his concert, Rodionov played music by Ukrainian composers, bands and musicians.

Back at Grao, customers keep coming with their laptops and tablets, ordering food (mainly breakfast plates for now, including some of the classic staples like crapes, oladushki — Russian pancakes, sirniki — cheese pancakes) and coffee, and catching up with friends, family, and work. “I still have no clue how people hear of Grao. We have an Instagram page, and have been mentioned on various Telegram channels,” explains Igor as the cafe gets more crowded.

Two women walk in speaking Farsi and greeting Igor. Although cafe's clientele is 70 percent Russian, the rest are a mix, Igor says. There are also offers to expand Grao, which means grain in Portuguese. A neighbor next door is offering his space. There are offers to host art projects and film screenings. But Igor is cautious, explaining that the plan is to take things slow for now.