Explaining the 20th Congress of the Communist Party of China: A new era

its a break from Deng Xiaoping’s era of economic liberalization 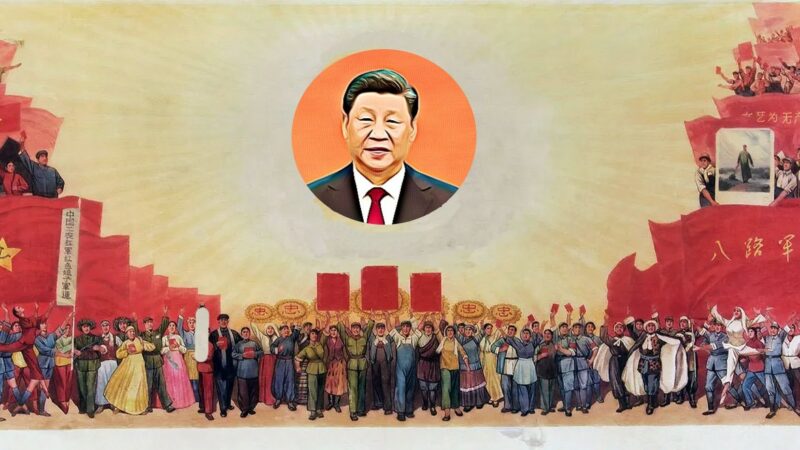 Global Voices is publishing a series exploring the language used during the 20th congress of the Communist Party of China and analyzing its implications for China’s national and international policies. Find the first, second and third articles here.

The most novel idea introduced by Chinese Communist Party leader Xi Jinping is that China is entering a “new era.” The term was first introduced in 2017 at the 19th National Congress of the CPC and later “Xi Jinping Thought on Socialism with Chinese Characteristics for a New Era” and was incorporated into the party constitution and eventually the Constitution of the People's Republic of China.

The Chinese socialist path and its global implications

Xi's previous ten years in office have been devoted to creating a Chinese ideology entirely distinctive from the West. Xi mentioned the term “new era” 46 times in his 19th Congress keynote in 2017 and outlined the new era as a historical period that marks the development of China’s socialism, which would contribute significantly to the development of international socialism and human society.

Yet, after five years, Xi’s new era seems more characterized by authoritarianism and statism. The three most significant successes since 2017 presented in his 20th Congress report are the Zero-COVID policy, the realization of the so-called “comprehensive jurisdiction” in Hong Kong through the imposition of national security law (NSL) and overhauling of the local election systems, as well as the demonstration of military power and political determination against Taiwanese independence.

All three cases indicate a break with previous political, diplomatic and economic norms, even though there could be huge consequences for these changes — the political crackdown has undermined the status of Hong Kong as an international financial hub, the military drills pushed Taiwan further away from one-China consensus and China’s economy has suffered a significant downturn thanks to the zero-COVID policy.

There were certainly other more human-oriented and socialist agendas such as common prosperity and environmental preservation in Xi’s October congress report. The reintroduction of supply and marketing cooperatives and food kitchens around the country is a huge gesture to stabilize the price of agricultural products and food, among other necessities. However, some see the move as a revival of the planned economy back in the 1950s.

Above all, it is clear that the state is taking firm control of all aspects of people’s economic, social and cultural life. Xi loyalists call the ongoing political and ideological struggle and the so-called “comprehensive” control a profound revolution, while critics call it a turn toward totalitarianism. Human rights and civil groups are concerned about its global implications:

2/2 Things will likely get much worse for human rights and civic freedoms before they start to get any better, and China’s model will remain influential internationally.
But absolute power won’t last forever. https://t.co/LbLOUlRT5G #CIVICUSLens pic.twitter.com/1fGhVXeyE2

A break from Deng Xiaoping’s era of economic liberalization

The term “new era” marks a break with former CPC leader Deng Xiaoping, who coined the idea of “Socialism with Chinese Characteristics”, at the 12th CPC Congress in 1982 to pave the way for China’s economic reform and further liberalization.

Deng’s political rhetoric was used to round off the ideological debate within the CPC on his economic policy, which facilitated the growth of private ownership, foreign investment, and a market economy. It marked a shift from the PRC founder Mao Zedong’s era when ideology and class struggle were viewed as a means to maintain the socialist political system and the single-party regime led by the CPC. Mao’s political approach led to a series of political purges, including the anti-Rightist Campaign (1957–59) and the Cultural Revolution (1966–76).

Unlike Mao, Deng was a pragmatist, as reflected in his “Good cat theory”, which suggested the separation of the economy from a political system, and his “Crossing river theory”, which argued that China’s socialism is an experimental process.

Yet Deng’s strategy to “let some people get rich first” resulted in a mass layoff of workers from state and collective-owned corporations, high inflation, and corruption as officials took advantage of their power to “resell” resources obtained from the “planned economic sector” to the “private sector”. In fact, anti-corruption, in particular, the call against “official resale” (打倒官倒) was one of the primary demands put forward by the students of the 1989 pro-democracy student movement in Tiananmen. Many protesters believed that political reform was the key to social and economic injustice, while some hoped to return to the Leninist and Marxist socialist path.

After the brutal crackdown of the Tiananmen protest, there was another round of debate which ended with Deng Xiaoping’s southern tour in 1992 and before the 14th CPC Congress wherein the “Socialist market economy” a new economic reform agenda.

While Xi Jinping is retaining Deng Xiaoping’s “Socialism with Chinese Characteristics” approach, the addition of “a New Era” to it implies a “restrategizing”, a “revision” or even a “break” from Deng’s legacy, as some China experts have noted. Richard Haass, a foreign policy expert, is among them:

Xi Jinping's “Back to the Future” address to the 20th CCP congress underscores the extent to which restorationists have won out over reformers. Control, statism, & nationalism are in the ascendant. The Deng Xiaoping legacy is gone…until & unless it returns to a post-Xi China.

Many China critics see Xi’s breakaway from Deng as a return to Mao’s era, a centralization of political power and a consolidation of the single-party regime, which was characterized by a cult of personality, ideological struggles, and political campaigns, in particular, the anti-corruption campaign.

Xi’s decision to disregard China's two-term limit for presidents and his appointment of stringent loyalists to his cabinet, has, indeed, made him the most powerful Chinese leader since Mao Zedong. However, the legitimacy of his power has come from the party's consensus.

After more than three decades of economic liberalization since Deng's open door in 1978, corruption has become the biggest social and political problem within the country. It has become an open secret that party cadres and government officials have worked their “white gloves” or “proxies” to run businesses, take up public-funded contracts, steal money, land, and natural resources and launder money through overseas investments. This has resulted in a socio-political crisis as unethical and vicious competition has become a norm under such crony capitalism.

Some political reformists have attempted to address the problem by promoting the legal rights of citizens. In fact, between 2004–2006, the Chinese authorities did play their part in promoting the term “rights defence” (維權) in consumer rights, youth, women, and rural rights campaigns. However, since 2008, the liberal political space started shrinking after the release of Charter 08 Manifesto, a public call for democratic constitutional reform signed by more than 10,000 public intellectuals. Soon after, Liu Xiaobo (1955–2017), Nobel Peace Prize laureate and one of the initiators of the manifesto, was arrested and later sentenced to 11 years imprisonment for inciting state subversion.

By then, it was clear that the CPC rejected political liberalization as a means to counter-check its party cadres and government officials’ power.

The global financial crisis (2007–2008) also contributed to the consolidation of the party’s political consensus as the incident was framed as a failure of western liberal democracy that caused social and economic injustice and political fragmentation.

To address the domestic crisis, after Xi took the Party Chief Secretary and the PRC presidential office in 2012/13, he fortified the anti-corruption campaign. Within ten years, nearly 5 million party cadres and government officials were investigated. In the next decade, Xi will be more determined to create Chinese history in his new era.