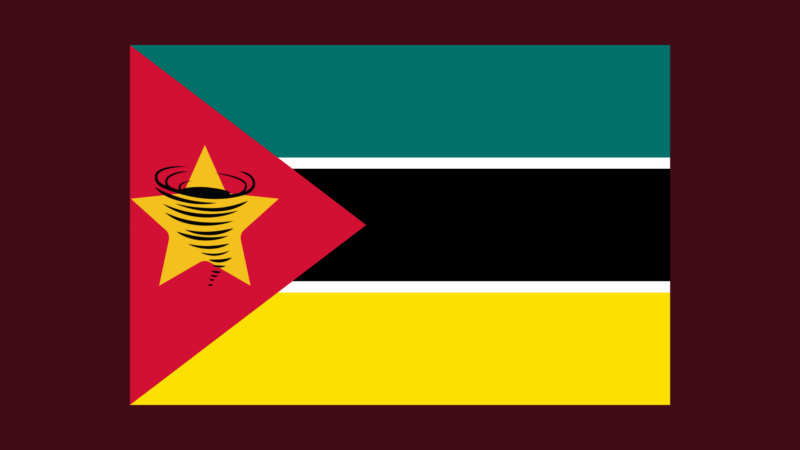 2019 was marked as the most difficult year in the history of cyclones in Mozambique. Image: Giovana Fleck/Global Voices

With the 2022 United Nations Climate Change Conference (COP27) taking place in Egypt and marked by the advance of climate change, countries like Mozambique, which have historically contributed less pollution than nearly any other nation have been in an increasingly delicate situation.

Zimbabwe, the Bahamas, Japan, and Malawi, respectively, complete the top five in the 2021 Index, which lists the countries most vulnerable to natural disasters caused by climate change. However, according to the UN Global Assessment Report on Disaster Risk Reduction, Mozambique is Africa's third most vulnerable country to disaster risk. These are two reports that use their own data, but also document the vulnerability suffered by Mozambique.

Recently, cyclones have been increasingly severe and common in Mozambique. In 2019, two strong tropical cyclones hit Mozambique during the same season — the first time since record. Tropical Cyclone Idai in March 2019 and Tropical Cyclone Kenneth the next month caused more than 600 deaths and an estimated 2.5 million people in need.

In March 2022, Mozambique was hit by another cyclone. This time was Tropical Cyclone Gombe, which entered the country with winds of 165 and 230 km/h, respectively. It reportedly caused more than 60 deaths.

Mozambique has been waiting for significant climate action to help the country overcome its vulnerability. In the absence of some international support, the country has been receiving incentives and messages of solidarity, such as in 2019, via the Secretary-General of the United Nations:

The Secretary-General is deeply saddened by the loss of life, destruction of property and displacement of people due to the heavy rains and flooding caused by Tropical Cyclone Idai.
The Secretary-General extends his condolences to the families of the victims and to the people and Government of Mozambique. The United Nations expresses its solidarity with the Mozambique authorities and stands ready to work with them as they respond to the humanitarian needs resulting from this natural disaster.

In 2021, Mozambique joined other world governments at the 26th United Nations Climate Change Conference 2021, COP26. Speaking at the event, then Prime Minister of Mozambique Carlos Agostinho do Rosário pledged to achieve 62 percent energy from renewable resources by 2030, but lack of support was posed as the first difficulty:

Mozambique alone, like other developing countries, will not have the resources necessary to finance structuring actions to address the impacts of climate change…

One of the issues that were under discussion at COP26 was the energy transition. Under the Paris Climate Agreement, which was adopted at COP21, coal must cease to be used as fuel by 2050. Mozambique has large coal deposits, and just two decades ago, coal was expected to be an important driver of Mozambican development, so the country will not abandon the use of coal in the short term.

Mozambique prefers an energy transition to cleaner and more environmentally friendly energies that is gradual and phased in order to minimise the impact on the economic development process of our country.

In 2021, Mozambique became the first country to receive payments from a World Bank trust fund to reduce emissions from deforestation and forest degradation — commonly known as REDD+.

World Environment Day was celebrated on June 5 this year under the slogan, “One Earth for Climate Resilience,” but the country has been waiting for more than a decade for funding from the Green Climate Fund. It is an initiative that, for the Mozambican authorities, has become unmanageably bureaucratic:

Mozambique has been in the process for almost 10 years of applying for the National Fund for Sustainable Development to access funding from the Green Climate Fund, a process that we consider to be very bureaucratic, but from the latest information everything indicates that we are a long way from reaching the end…

In October 2022, Mozambican President Filipe Nyusi called on all countries worldwide, particularly on the African continent, to act immediately to halt catastrophes caused by humanity. Nyusi delivered his speech as the ‘African Union Champion for Disaster Risk Management on the continent during the celebrations of the International Day for Disaster Risk Reduction.’

According to local press, the United Nations Summit on Climate Change (COP27) will have repercussions for the vulnerable, yet low-polluting country Mozambique. Speaking during preparatory activities aimed at agreeing on positions to be defended at COP27, Mozambique’s Minister of Land and Environment, Ivete Maibaze, stressed the country’s main areas of interest are: financing in the context of climate change; the Nationally Determined Contribution (NDC); Renewable Energy; Reducing Emissions from Deforestation and forest Degradation, climate change adaptation and disaster risk reduction, as well as Gender and Climate Change issues.

The Government of Mozambique looks to COP27 as a stage on which to leverage climate finance, in order to achieve the low carbon transition in line with the NDC.