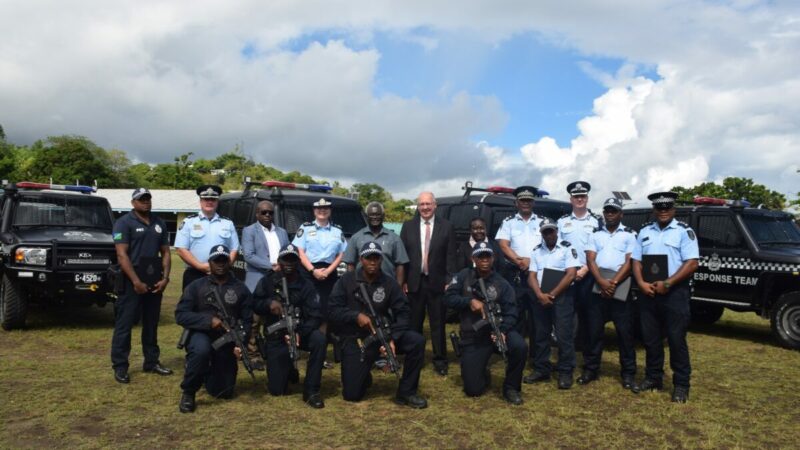 As global superpowers vie for influence in the Pacific, the various types of assistance given by Australia and China to the Solomon Islands police have elicited questions and concern about their long-term geopolitical impact. Some citizens are worried that the trend toward “militarization” could turn the Solomon Islands into a “gun state.”

Early this year, a leaked security pact between the two countries raised alarm about its destabilizing impact in the region. Solomon Islands Prime Minister Sogavare has repeatedly denied that the security partnership will lead to the installation of a Chinese military base in the islands. He insisted that China only offered to help in the training of the local police force.

Solomon Islands sent police officers to China to undergo training, which involved the teaching of martial arts. This was reported by Global Times, a state-run news website. Zhang Guangbao, who is the leader of the China Police Liaison Team to the Solomon Islands, described the martial arts training:

We combined martial arts and grappling, and our local colleagues were very interested in it, because they of course all know Bruce Lee and Jackie Chan. We taught them martial arts moves which they had never seen before.

China also sent replica guns to the Solomon Islands as part of its training assistance.

Opposition leader Matthew Wale noted that Australia and China are trying to outcompete each other through the militaristic donations:

Sucking up to Soga & trying to out-compete China! For use where & when? https://t.co/nB4NjOYBQ4

He believes this does not benefit the country in the long run:

It is clear Australia is anxious that if they do not supply guns then China will. Geopolitical interests has surpassed national interest in this country and it is a sad state of affairs.

Solomon Islands Opposition leader slams Australia's move to hand 60 semi-automatic rifles to the RSIPF. He says the country does not need to be “militarised” and says Australia is being driven by “anxiety” over China's growing police cooperation program in SI pic.twitter.com/v4xPoJ0goU

Prime Minister Sogavare argued the donations will enhance the capacity of the police:

To those who view the enhancement of our Police Force, in a negative lens, I wish to appeal to you, to note that it is the responsibility of the [police] to serve and protect the lives, welfare, liberty and property of all individuals in this country. To be unable to deliver on this mandate is a poor indication of a country’s own security capacity, as a Sovereign and Independent Country. We must have that capacity and not depend on others.

He added that a strong police force will be able to protect the country from threats:

Law and order is an enabler for development, and it is important that as a Sovereign State, we are able to better protect ourselves, deliver on our security mandates, and confront threats when it looms.

Some disagreed. Journalist Robert Iroga urged the government to focus on other aspects of governance as he warned against the possible negative consequences of arming the police with assault weapons:

It is not the power of one’s guns that determine a good government. Rather, it is the ability of a government to deliver opportunities and better livelihood to its people.

Journalist Dorothy Wickham said the donation will entail additional expenses for the government:

My god! Who will pay for all the fuel and maintenance of these police vehicles and weapons. The police have many vehicles sitting idle because there is no budget allocation to fix them. And can they quarantee the safe keeping of these weapons when under pressure?

She is also worried about how the intense rivalry in the Pacific could turn her country into a “gun state”:

Australia and China must not turn my country into a gun state again😡, we have been down this road before. Only 1,700 officers for whole country and you arm them! Increase community policing not arm them🙄…or we will be all sorry in the near future!