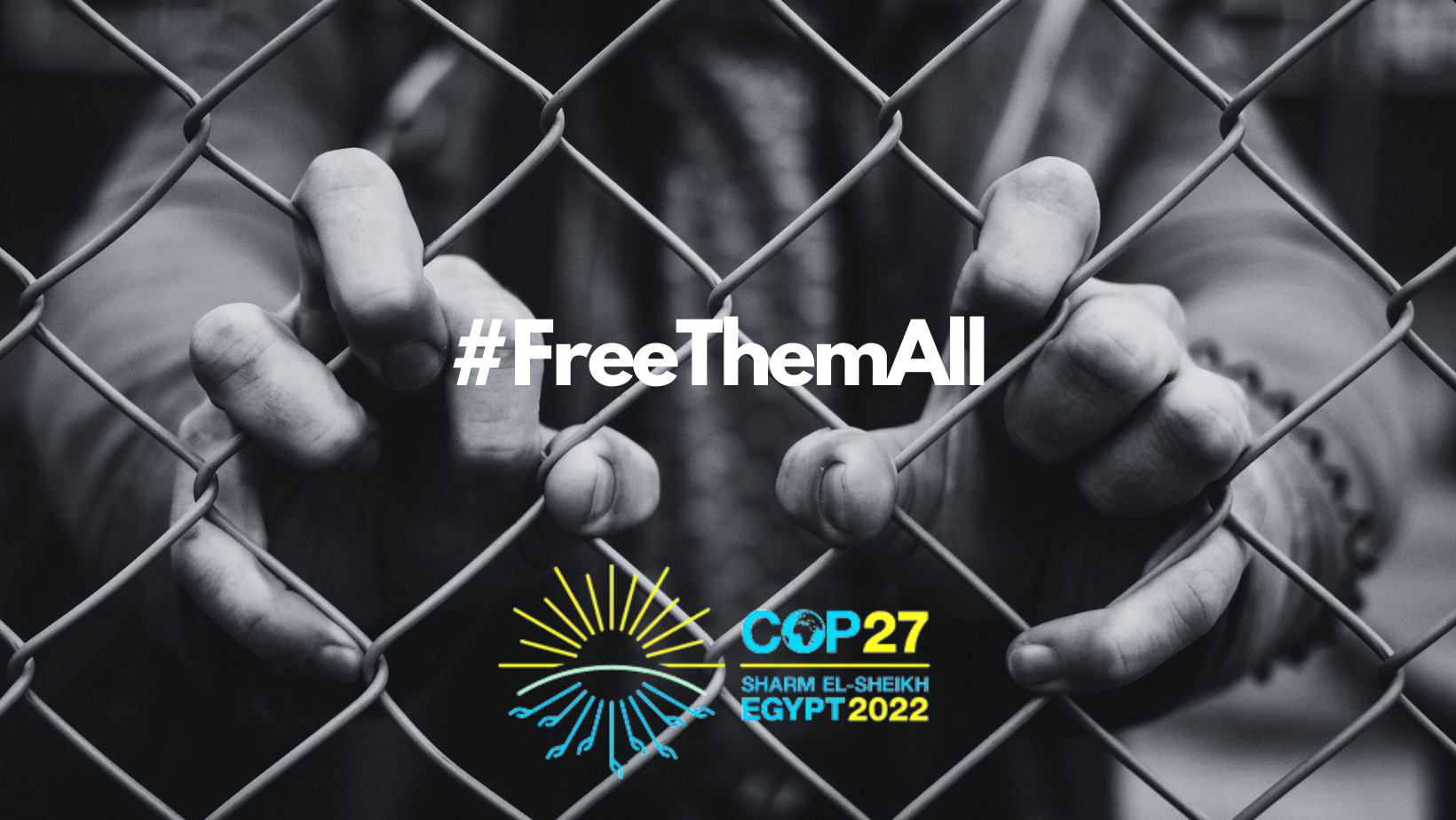 By Mariam A. Used with permission

All eyes are on Egypt as it hosts the 27th UN Conference on Climate Change (COP27) in Sharm El-Sheikh from November 6–18, which brings together more than 190 governments to attempt and solve some of the world's most pressing environmental challenges.

The world is currently experiencing catastrophic weather events, an energy crisis caused by the Ukraine conflict, and troubling UN research warning that “a window of opportunity is on the verge of closing” because humanity is not doing enough to combat global warming.

However, the conference agenda is at risk of being detailed by the host nation's deteriorating human rights record and crackdown on the civic space.

COP27 — a space for “greenwashing”

This is exacerbated, according to experts, by a coordinated increase in hotel rates, excessive restrictions on the right to peaceful assembly outside the COP27 venue, and arbitrary delays in the issuance of visas to international visitors.

Super fun to have a climate summit in a police state sponsored by @CocaCola while most “civil society” delegates save their indignation for jacked up hotel prices instead of locked up political prisoners. #COP27 in #Egypt is shaping up to be very cool and normal. #SaveAlaa https://t.co/28NEuyYxVD

To add fuel to the fire, the Egyptian government excluded any Egyptian organizations based in Sinai or primarily focused on Sinai from attending the COP27, despite the fact that the summit is being held in Sharm il Sheikh, which is located on their lands according to the Cairo Institute for Human Rights.

Since 2013, the Egyptian government has been waging a military campaign against an Islamic State affiliate in North Sinai. The campaign includes severe restrictions on the movement of people and goods across almost the entire governorate, as well as the suspension of telecommunications services for several days at a time. As a result, the residents of the area are in desperate need of humanitarian assistance.

This is part of a larger context in which Egyptian President Abdel Fattah El-Sisi’s government has repressed Egyptian civil society and human rights advocates, restricting their ability to participate in political discourse and civic spaces since assuming power in a military coup in 2013.

“Arrests and detention, NGO asset freezes and dissolutions and travel restrictions against human rights defenders have created a climate of fear for Egyptian civil society organisations to engage visibly at the COP27,” experts said.

According to a Human Rights Watch World report 2022 that highlights Egypt's ongoing human rights crisis under President Abdel Fattah El-Sisi's administration, in 2021 the government increased the prosecution of peaceful activists and critics by the abusive Emergency State Security Courts. The Courts also handed down death sentences in mass trials, adding to the sharply rising number of executions.

Simultaneously, the number of political detainees, including government critics, journalists, and human rights activists, surpassed 60,000. Many detainees spend long periods of time in prison without trial and then become entangled in a system of “recycled cases” designed to keep them incarcerated, in which released detainees are re-arrested in new cases on the same or similar charges.

Authorities also neglected to look into the many cases of mistreatment and torture that continue to occur behind bars. While also intensifying the targeting of Egyptian families of human rights advocates who live abroad.

#SaveAlaa, the window of opportunity is on the verge of closing for Ala’a Abdel Fattah 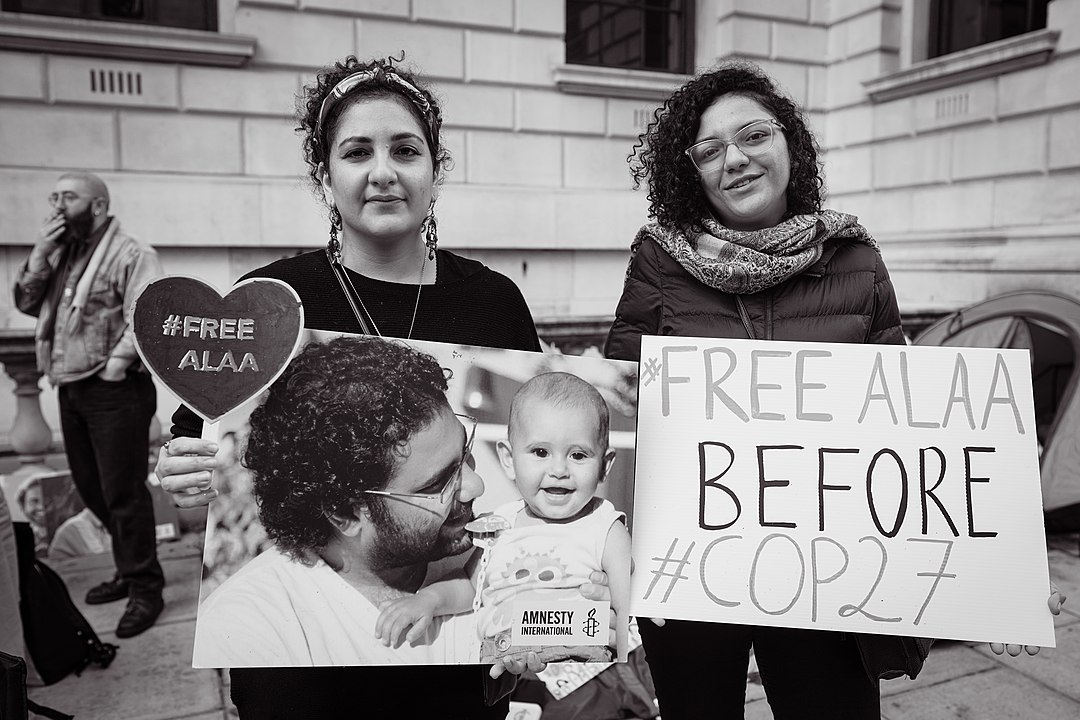 Alaa Abdel Fattah is one of these individuals. Human rights defender, author, and software developer of British-Egyptian origin. He was one of the leading voices during the January 25, 2011 revolution, and as a result, he has been arrested by every government in his lifetime.

Two years ago today, Alaa Abd El Fattah was arrested by security forces from Dokki police station, where he was spending 12 hours a day on probation. Today marks the legal limit of his pretrial detention.
Here is a timeline mapping his experience with the prison system. pic.twitter.com/ksL1njU5QF

His most recent arrest began with his kidnapping on September 29, 2019, where he was held in pretrial detention for more than two years for “spreading false information” in the form of sharing a Facebook post. After that, he was then sentenced to five years in prison.

On April 2, 2022, Alaa began a hunger strike to express rejection of his harsh prison conditions and the politically-driven sentences that robbed him of years spent with his son and family.

It is either freedom or death for Abedel Fattah before the end of COP27.

Abdel Fattah's sister Sanaa left London, where she spent the last few weeks campaigning for his freedom to attend COP27:

I'm on my way to #COP27 as my brother @alaa, a British citizen, begins water strike. He may only last a few days. My family needs proof of life by noon every day. @RishiSunak, I'm relieved you're working to #FreeAlaa until then, will you confirm that Alaa is still alive each day?

Abdel Fattah has been involved in a number of citizen journalism initiatives. His book, You Have Not Yet Been Defeated, has received widespread acclaim.

#Alaa wrote “My mother started a sit in in front of the prison gates. It ended with her & my 2 sisters being assaulted & Sanaa being arrested for the 3rd time..I describe Sanaa’s stubborn, defiant personality”p.432.
Today @sana2 @Monasosh fight for their brother’s life#FreeAlaa pic.twitter.com/i26wIoq1jA

Popular protests against the backdrop of the conference

Even though protesting has been legally banned since 2013 and is often dealt with firmly, Egyptians are calling for protests to take place concurrently with the conference in response to price increases, declining living standards, demands for civil rights and freedom of expression, and calls for President El-Sisi's resignation, calling it the “Climate revolution.”

A crucial clarification, 1-Between November 6 and 18, Sisi and his militias will not be able to use any kind of force against the protesters, not even water cannons or gas. 2- This is our opportunity since Sisi is in trouble and and this is his weakest. protest on November 11, #ارحل_عدو_اللهGo, you enemy of God; #إنزل_١١_١١_حرر_بلدك, protest on 11/11 to free your nation; #نازلين_الجمعه_11_11_ثورة_المناخ, We are taking the streets on 11/11 the climate revolution

Nearly 70 individuals have reportedly been detained thus far in connection with demands for protests to take place in conjunction with the COP27 climate meeting.

There have also been reports of security officers in civilian clothes checking pedestrians’ mobile phones, looking up their social media profiles, and detaining anyone they suspect of being politically active.

We record discerned that National Security Agency and the security forces affiliated with the Ministry of Interior in #Egypt, have launched an extensive campaign of arrests in most of the governorates of the Republic. According to reports, the arrests targeted some released former detainees, in addition to the families of some Egyptian dissidents abroad.