Algeria could provide warmth for Europe during the frigid season 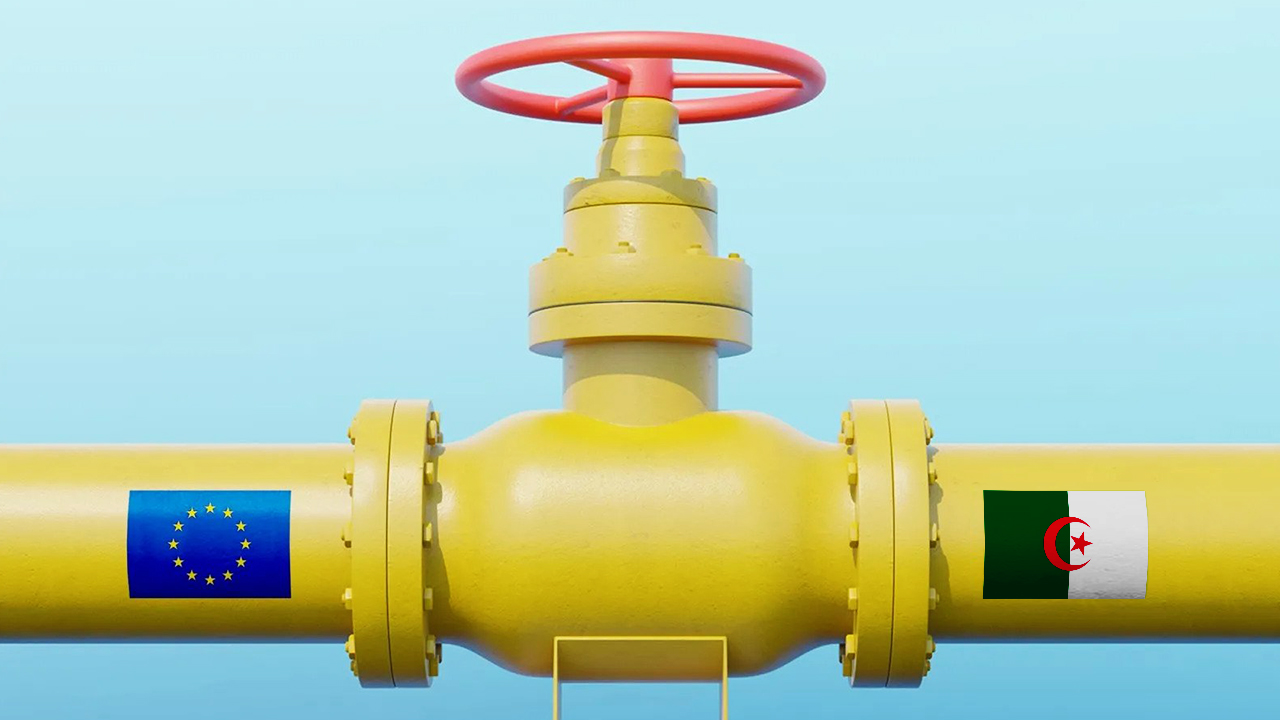 The world had barely stablised from a global pandemic when geopolitical mayhem erupted at the beginning of 2022. A Russian invasion of Ukraine, and Europe’s break with Moscow is currently disrupting the world order. Between European Union sanctions on Russia, and the latter’s indefinite suspension of oil, coal, and natural gas exports to the western part of the continent, fears of an unprecedented cold winter for Europeans loom. Currently wallowing in an energy crisis, Europe is now forced to re-evaluate its energy supply chain, and decrease its dependence on Russia.

In the backdrop of these uncertain international relations, a North African country emerges as a potential savior that could provide warmth for Europe during the frigid season. An OPEC member, Algeria enjoys a substantial wealth of natural resources. It has the tenth-largest proven reserves of natural gas in the world, is the sixth-largest gas exporter, and has the third largest reserves of shale gas. Algeria also ranks sixteenth globally in proven oil reserves, making it an attractive option for Europe and a practical alternative to Russia.

However, is Algeria actually capable of compensating for the shortage of Russian gas supplies to the EU? And is it willing to cooperate?

The tensions between Brussels and Moscow are growing as Western Europe tries to impose new sanctions against the Kremlin. Amid this geopolitical pressure to take sides, Algeria has been careful not to upset Russia, its historical ally. Clearly, the North African country has adopted the same subjective neutrality and non-aligned approach it displayed during the Cold War era. Meanwhile, Spanish–Algerian relations have been deteriorating, due to Spain’s backing of Morocco on the Western Sahara case. As a result, Algeria reduced the percentage of its overall gas exports to Spain from 45% to 22% in July, while also switching supplies from Spain to Italy.

Still, the energy dialogue between Algeria and the European Union has been fruitful, and the former has agreed to increase its gas supplies. Italian prime Minister Mario Draghi and French president Emmanuel Macron visited Algeria, in hopes of solidifying the partnership with their now second major energy supplier after Norway. Italy, as it turns out, would have the biggest share. Since 2022 began, reports show that Algeria supplied Italy with 13.9 billion cubic meters of gas, a 113 percent rise over initial forecasts.

Yet, can Algeria actually replace Russia as an alternative for Europe’s energy woes? To answer this question, we have to take a further look at Algeria’s energy capacity.

The challenges of Algeria’s dependence on Hydrocarbons 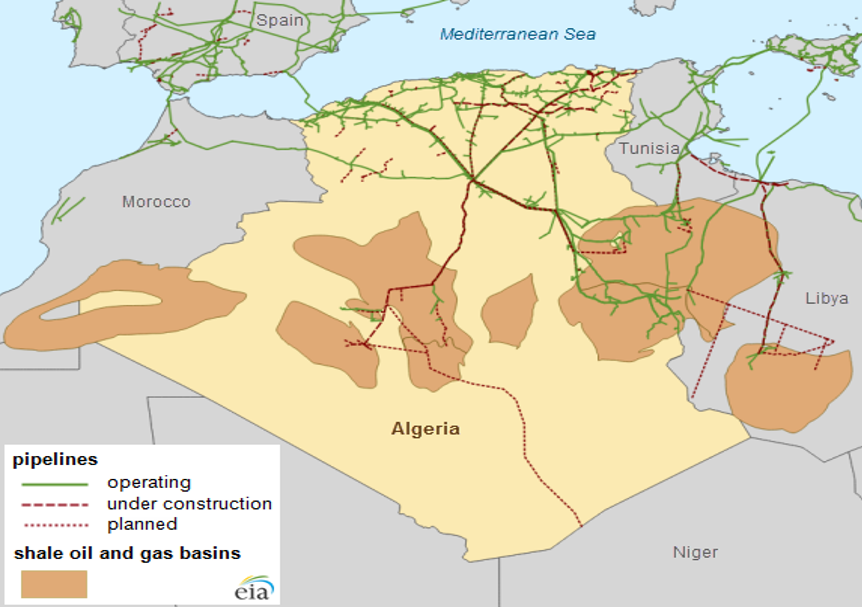 Algeria is the leading African gas exporter to Europe, having exported nearly 19 billion cubic meters of natural gas in 2021 alone; it also has significant shale gas potential. The hydrocarbons sector, marked with massive crude oil and natural gas resources, has long been the backbone of the country's economy. This, however, leaves the country at the mercy of volatile global oil and gas prices. In other words, a decline in oil prices could easily debilitate Algeria’s economy.

With the latest geopolitical confrontations shining a spotlight on Algeria’s energy potential, questions have been raised about whether it can actually compensate for Russia. Algeria contributed about 11 percent of imported European gas in 2021, while Russia provided approximately 45 percent of Europe's gas.

Hence, it would be hard for Algeria to meet the demands of the global market, especially in the wake of rocketing domestic energy consumption.

The country's over-reliance on hydrocarbons in electricity production has severely harmed its exporting capacities, resulting in a drop in export revenues. Essentially, Algeria's energy sector has been neglected thus far, as reserves are depleting and production is stagnating.

With a total landmass of about 2.3 million sq. km and more than 1,600 km of coastline, Algeria is the world’s tenth-largest country and the biggest in Africa and the Arab world. The Sahara Desert makes up much of its surface, and over 3,000 hours of annual sunlight allow Algeria to build one of the world’s greatest solar fields.

Yet, despite that, the share of renewable energy in Algeria's overall energy mix remains low. In 2021, 99 percent of electricity production was gas-based. Although it boasts a great renewable energy potential, Algeria unfortunately lacks infrastructure. Only minimal steps have been taken to build renewable energy capacity, as the state remains fixated on raising hydrocarbon investment. This renders the country incompatible with a European gas market that is rapidly shifting towards renewables.

But, can Europe help Algeria renovate its energy sector?

In the recent Algeria–EU energy dialogue, the EU's energy commissioner Kadri Simson hailed the cooperation as a “long-term strategic partnership.” Fundamentally, it is crucial that this partnership focuses on scaling up energy investments.

However, will Algeria's foreign policy permit foreign investments even if it wants to work with Europe and modernise its energy sector?

In Algeria's public tenders, foreign contractors had to find local partners because the participation of foreign investors was capped at 49 percent until 2019.  However, in 2020, the government dispelled the “51/49″ restrictive rule, though it remains applicable for certain strategic sectors such as hydrocarbons, mining, defense, and pharmaceuticals.

Even though Sonatrach, Algeria's state-owned oil company, still retains control of the hydrocarbon exploration and exploitation activities in Algeria, a new hydrocarbon law enacted in December 2019 has introduced the possibility of production sharing with foreign groups. The current contractual framework allows more flexibility and fair distribution of profits to foreign operators. Subsequently, Algeria’s Sonatrach signed a massive USD 4 billion oil and gas “production sharing” contract with European partners last July, a deal that should help increase the volume of gas available for export.

Although increasing Algerian gas exports remains a foremost priority for the EU, the bilateral energy cooperation also aims at leveraging the great potential of untapped renewable resources abundant in Algeria.

Scaling up investments in the renewable energy area would be crucial and equally beneficial to both parties, with renewable power potentially freeing up volumes of gas and eventually increasing international export capacity. In this regard, the Algerian government intends to achieve 15,000 MW of solar energy by 2035. A call for tenders is rolling out to install solar power plants in several regions.

This profound shift in the geopolitics of energy has placed Algeria at the forefront of the international energy scene. And while Algeria is ready to commit to the “long-term strategic partnership,” it doesn’t want to offend its long-term partner Russia. Altogether, the successful energy dialogues and the talks about ample foreign investment and effective technology transfer will mark a new era of power development and diverse income for Algeria.