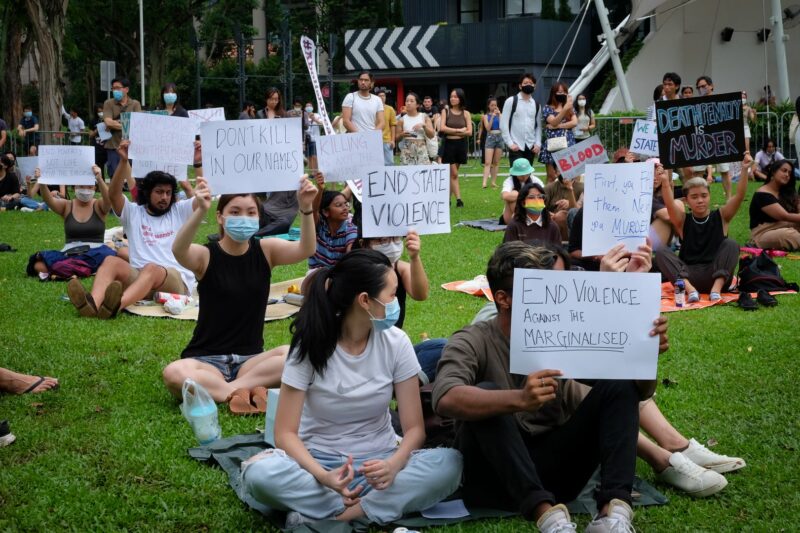 Singapore executed 11 individuals this year on drug-related offenses, while an estimated 63 prisoners are currently on death row.

Concerned about the judicial executions, a group of activists and human rights defenders under the Transformative Justice Collective initiated the #StopTheKilling campaign, which asks the public to pressure authorities to impose an immediate moratorium on the death penalty and its abolition in the long run.

The campaign has a petition asserting that the death penalty is not the right solution to prevent crimes:

The death penalty has no place in a caring and just society, which many Singaporeans desire. We do not accept the murder of our fellow people in our name, and firmly believe it is high time that we take steps towards abolition.

Instead of issuing death sentences to deter drug-related crimes, the petition urged the government to adopt a different and more holistic approach:

If we want to deter people from participating in the drug trade, we should ensure that there is affordable and high-quality healthcare and housing, decent jobs with living wages, strong labour protections, and free, accessible and voluntary community-based rehabilitation programmes that do not treat their participants as criminals.

Another petition submitted by families of prisoners on death row to members of Parliament highlighted the legal difficulties they face during the trial process:

We are concerned about the climate of fear that affects the willingness of lawyers to take on death penalty cases at later stages. This affects the right to adequate representation for people on death row. We have seen and experienced first-hand the increasing difficulty in finding lawyers for our loved ones.

The continuing use of the death penalty in Singapore gained more coverage recently after the Ministry of Home Affairs (MHA) invited British billionaire Richard Branson and challenged him to a live TV debate. The MHA was reacting to Branson's blog post, which criticized the drug-related judicial executions carried out by the Singaporean government. Branson, a member of the Global Commission on Drug Policy, wrote the post on October 10, which marked the 20th World Day Against the Death Penalty.

The MHA insisted that based on the experience of Singapore, the death penalty law has been effective in curbing drug issues in the country. It also questioned why a foreigner had the credibility to lecture Asians about the drug problem:

Mr Branson is entitled to his opinions. These opinions may be widely held in the UK, but we do not accept that Mr Branson or others in the West are entitled to impose their values on other societies. Nor do we believe that a country that prosecuted two wars in China in the 19th century to force the Chinese to accept opium imports has any moral right to lecture Asians on drugs.

Branson declined the invitation on October 31 and urged Singapore authorities to listen to and engage with local voices opposed to the death penalty. The MHA responded by asserting that majority of Singaporeans support the use of the death penalty, and it accused some local activists endorsed by Branson of peddling “misinformation” and “untruths.”

Writer Kirsten Han, who is also part of the Transformative Justice Collective, questioned the motives of MHA in challenging Branson to a debate:

…it’s an attempt by the Singapore government to frame the death penalty issue as an “East versus West” culture clash, and to set up Shanmugam [MHA Minister] as a Singaporean nationalist standing firm against a sanctimonious Western interloper. It’s not a debate. It’s a red herring designed to distract from a growing local abolitionist movement.

She added in a Twitter thread that the planned debate was not what the public needed:

This won’t help anyone, not the people on death row, nor people who use drugs, nor people who need care and support for their drug use. If we really wanted to prioritise people’s well-being, we need a real review and a real national conversation about what we can do differently.

Meanwhile, the Anti-Death Penalty Asia Network echoed the message of Singaporean activists about the global trend regarding the abolition of the death penalty.

The global trend towards abolition of the death penalty reflects both a respect for the dignity of humanity, an abhorrence of the cruelty of the practice, and evidence-based knowledge that the death penalty is not a more effective deterrent than other forms of serious punishment.