Thora Dumbell, a cornerstone of dance education in Trinidad & Tobago, passes on 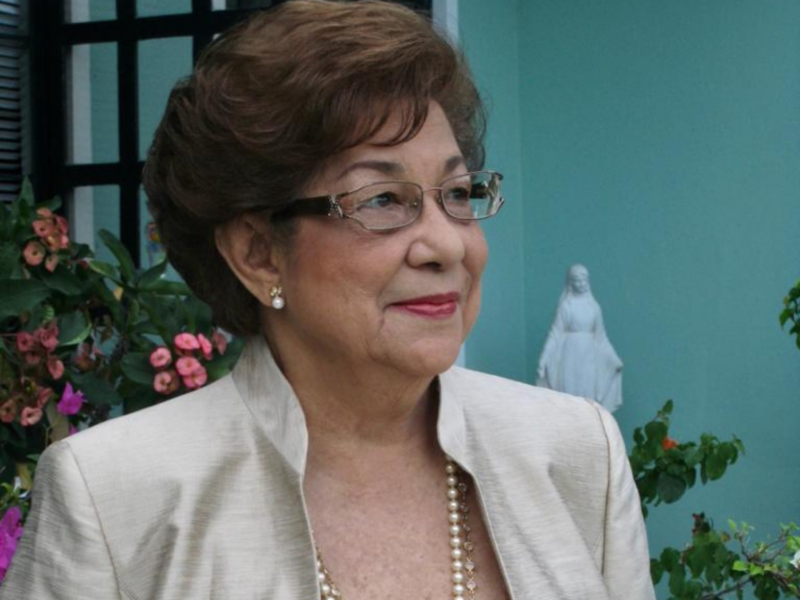 On the morning of November 4, Trinidadian dance pioneer Thora Dumbell — “Auntie Thora” as she was fondly known — passed away at her home at the age of 98, leaving the local arts community bereft. More than an elegant dancer, choreographer, or beloved teacher, Dumbell was a polestar, a place to call home for thousands of graduates from The Thora Dumbell School of Dance, her “girls,” as she called them, and as they, too, referred to themselves.

Born Thora Thomas on January 12, 1924, Dumbell embarked upon her dance career, though it really was more of a calling, at the tender age of three. She performed at a charity event at Government House in Port of Spain, which was the residence of the governor, Trinidad and Tobago being a colony of Britain at the time. Her talent was so obvious that she subsequently appeared in two movies: a British film at the age of eight, and at 11, Warner Brothers’ adaptation of the musical “New Faces of 1936.”

She was a mesmerising dancer; graceful and light-footed. To watch her dance was like following an angel as she flit from cloud to cloud, except Dumbell had a bit of cheek, usually factoring in something fun or unexpected into the choreography, and always performing with a big smile on her face. Dancing was instinctive to her, and she dedicated much of her life to her first love.

Her other love was her family — her husband Sidney, and their three children. Motherhood came naturally to her, not just within her own family, but extending outward to the larger community of youngsters she would teach to dance when she opened her school in 1950. The school, which eventually made its home at the Chinese Association building on the outskirts of the capital, continued to thrive well into the 1990s, finally closing its doors around the turn of the century.

The Thora Dumbell School of Dance would put on annual shows, often partnering with friends and creative collaborators like Carnival designer Wayne Berkeley, with whom she produced “Broadway in Concert” at Queen's Hall, Trinidad's first national concert hall and now one of the region's leading arts centres.

Dumbell actually performed at Queen's Hall's grand opening in June 1959. Explaining what the presence of such a facility meant to her, and what it could mean to the nation, she said:

We had waited so long for a theatre for the arts that we all knew it would be something to remember. May [Johnstone] had this dream that this would be a theatre for all, and we saw it happen […] and for those who were privileged to be here, I think it is something we would want to cherish for the rest of our lives.

On stage, dancers from the Thora Dumbell's School of Dance at the Opening Night of Queen’s Hall on June 4th, 1959. #TBT #HallofHistory pic.twitter.com/4cRAsXCsGo

Dumbell's dance troupes, which mastered various styles of dance, from ballet and tap to modern, jazz and folk, and which featured students of varying ages, were constantly in demand to perform at Carnival shows, diplomatic functions, charity events, Christmas pageants and other major celebrations, including Trinidad and Tobago's show marking UNESCO's International Year of the Child. Together with fellow dance pioneer Beryl McBurnie, Dumbell was involved in organising a rally of 6,000 children at the Queen's Park Oval in Port of Spain in honour of Queen Elizabeth II‘s 1966 visit to Trinidad. She coordinated similar events for a 1968 visit by India's prime minister Indira Gandhi and, as a staunch Catholic, for Pope John Paul II in 1985.

The unique combination of Dumbell's love for and understanding of children, her knowledge of dance and movement, and her boundless creativity made her a sought-after judge for the country's annual Red Cross Kiddies Carnival competition. She was also very much in demand as a judge for Easter bonnet parades, and the child-like delight on her face when she saw a particularly innovative design or a competitor with natural stage presence was as much of a joy to witness as the contests themselves.

She quietly went about supporting charities and doing her best to improve people's lives, and in 1978, was honoured with the Humming Bird Medal (Gold), a national award, for her work in the area of community service.

Once news of her death became public, social media users took to various channels to share their memories. The Facebook page Angelo Bissessarsingh's Virtual Museum of Trinidad and Tobago called Dumbell “one of our cultural icons” and an “amazing and beautiful soul.” Former students remembered her as “full of grace and poise,” “humble as ever,” and “a legend.” Another past pupil felt that Dumbell's passing was “the end of an era”:

The woman who inspired so many, including me, and nurtured the seeds of a lifelong love of dance. Our living legacy.
Rest in peace, “Aunty” Thora. ❤️🙏🏽
[…]
Many generations have lost a cherished icon.

Honoured to have taught class at her school for a brief period. What a pioneer.

The Little Carib Theatre, founded by Beryl McBurnie, paid tribute to Dumbell's “legacy of commitment to dance education,” while the Bentley Potter School of Dance said:

We have lost a truly incredible icon in the dance world. Thora made such a positive impact on so many people and her legacy will live on in all of our hearts.

The last word, however, belonged to Margaret Samuel, one of her “girls,” whose mother Grace also taught alongside Dumbell:

The Thora Dumbell School of Dance was a fixture in our lives. The thousands of ‘girls’ who passed through Chinese Association, who participated in the numerous shows, who learned tap, ballet, modern and jazz but above all, benefitted from her wisdom, her talent and her incredible love of life. […]

To […] the entire family, we say ‘Thank you for sharing your precious mum with us.’ I know that could not have been easy, as so many felt that she belonged to them. […]

Thank you, Auntie Thora for reminding us what love, kindness and goodness really are. You loved your Lord and you truly lived your religion, not only sharing your talent with the world but sharing and spreading yourself around when at times you were probably overwhelmed with requests and calls from others.You were stylish to a fault and loved an off the shoulder. 💃
Rest in peace, good and faithful servant.
So happy that mum brought you into my life. You forever changed it.