Some workers believed that they would die if they didn't flee 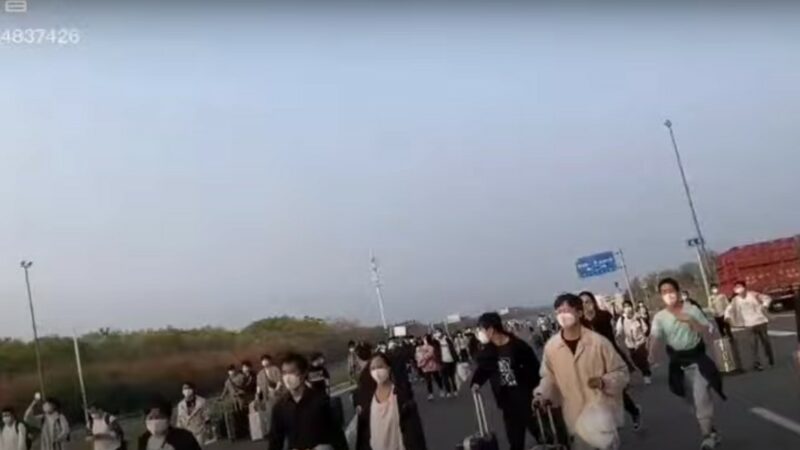 The workers were escaping COVID-19 lockdown after an outbreak forced the 300,000-worker campus to quarantine since mid-October. Numerous witness accounts suggested that it was fear generated from rumours, COVID-related misinformation, and closed-loop factory management that drove the workers to run. Stephen McDonell, BBC's China correspondent, posted one of the widely circulated videos on Twitter:

Workers have broken out of #Apple’s largest assembly site, escaping the Zero #Covid lockdown at Foxconn in #Zhengzhou. After sneaking out, they’re walking to home towns more than 100 kilometres away to beat the Covid app measures designed to control people and stop this. #China pic.twitter.com/NHjOjclAyU

Workers: “We will die if we didn’t escape”

Many workers believed that they would die from COVID-19 if they did not flee the campus.

According to multiple accounts from workers, Foxconn started implementing pandemic control measures on October 17. Then after a few days, all the on-campus canteens and supermarkets were closed, and the factory management started distributing N95 face masks and medicines to all the workers.

As more and more workers tested positive, the factory management suspended regular PCR tests, which created more panic. Workers were worried that the outbreak was out of control, and some believed that the management was prioritizing production over their well-being.

Worse still, workers kept receiving video calls for help from their quarantined colleagues. Below is a transcript of a video message from a quarantined female worker:

Female worker #3: (sounds desperate) This is my second day in quarantine. I tested positive and was put on quarantine. I have another roommate here, she was quarantined for 5 days already, and no one had ever shown up to take care of her. In my dormitory, people were coughing and having fevers. I have no idea if we are positive or fake positive. But we were all taken here. No one cares for us. Yesterday they gave us two loads of bread […] I don't know what to do and feel like I am left here to strive for my survival…

Then, on October 29, a video suggesting that eight female workers from room 726 of a factory dormitory were found dead, sparking fear among the workforce. Many decided to run for their lives.

They are paying a huge price for their choice. Many had to walk for hours in the fields and on the highways as they did not have a green-colour health code required for them to access public transportation.

Visuals of migrant workers working at Foxconn in Zhengzhou fleeing the factory on foot on the highway are circulating on social media. There are about 300k workers here and 20k are rumoured to have tested positive, which local authorities denied. pic.twitter.com/mu02MDvzna

Moreover, they have to give up their RMB 7,000 (approximately USD 950 dollars) seasonal work bonus, which was due to be released in early November.

While the escape was triggered by rumours about deaths in the dormitory, many say the panic was spurred by the impartial and biased medical information spread by influencers to justify the zero-COVID measures in China.

Outside China, most people know that the COVID-19 virus has evolved into less serious variants with lower death rates and milder symptoms. Yet, mainland Chinese social media platforms are flooded with bleak news spread by influencers about the massive number of deaths and severity of long-COVID around the world.

The most recent example is a viral video shared on social media featuring a speech delivered by Gu Junhui, a mainland Chinese corporate strategist. In the video, Gu quoted a research report that 2–4 million Americans had lost their ability to work as a result of long COVID and thus claimed that within 5–10 years, China could gain victory as the West would be doomed:

A Chinese business consultant in a Ted-style talk justified zero-Covid policy by saying that in 10 years the West will be brought to its knees b/c long-Covid, which will decimate most of its labor force. pic.twitter.com/kQRTDYE813

Hence, many mainland Chinese, particularly those who rely on domestic news sources, are very fearful of COVID-19 as they believe that the virus could kill them or result in adverse effects such as brain damage, sexual dysfunction and long-term complications, etc.

Thus when the Zhengzhou city government attempted to de-demonize COVID-19 as a “self-limiting disease” that would go away without treatment, many refused to believe it and criticized the city government for being irresponsible.

China’s economy has suffered from its zero-COVID policy after the highly contagious Omicron found its way to China in early 2022. Many cities, including mega-cities such as Shenzhen and Shanghai, had been locked down. Currently, hundreds of millions of people still have to constantly conduct PCR COVID tests in order to go to work.

To contain the policy damage, some city governments demand manufacturers adopt a “closed loop” operation mode to ensure their production is unaffected amid COVID outbreaks. Under the system, workers cannot leave the factory campus and must conduct daily PCR tests during outbreaks. Foxconn’s campus in Zhengzhou is operating in a “closed loop” model, which means, the factory management has to take up all the extra duties, including regular PCR tests, closed-loop campus management, and disinfection work, among others.

Ah Bo, a mainland Chinese labour rights activist, believed that some workers were not fleeing the virus, but the inhumane closed-loop working environment.

My gut feeling is that virus is not the only thing the Foxconn workers are running away from.

All human beings need social life and entertainment. Under closed-loop management, their lives are transported from one point (dormitory) to another point (assembly line), they can’t go out, can’t visit their family, can’t eat in the canteen, can’t have collective activities and entertainment. Even if you are well fed and paid, the stress would be enormous, and at some points, they could not stand it anymore.

Just take a reference from your own town, how long does it take to control the outbreak? What is the price? In the process, what else did you receive except a basket of symbolic veggies? Does your government provide three meals a day for you?

Hundreds of thousands of people live in an area of more than 10-kilometre square. The mere management of meals and maintenance of hygiene is a huge challenge. The company meets the challenge on its own… Shutting down the production lines is the most convenient method, but at what cost?… In the past few years, negative emotions and information have spread more quickly and broadly than positive ones, the company does not have the resources to control opinions. Indeed, the negative information that you have come across has reflected some truth, but please trust me, this company is cleaner than this society…

Foxconn’s Zhengzhou factory campus has 90 production lines that manufacture 50 percent of Apple iPhones. Its export value is up to 80 percent of Zhengzhou and 60 percent of Henan province's total export output. It is anticipated that the exodus of Foxconn workers and the temporary suspension of the factory’s production would affect 10 percent of global iPhone production.

Meanwhile, despite its economic implications, the Zhengzhou city government announced a week-long lockdown of 600,000 people, the majority of whom are workers, in a vast industrial area where Foxconn is located.