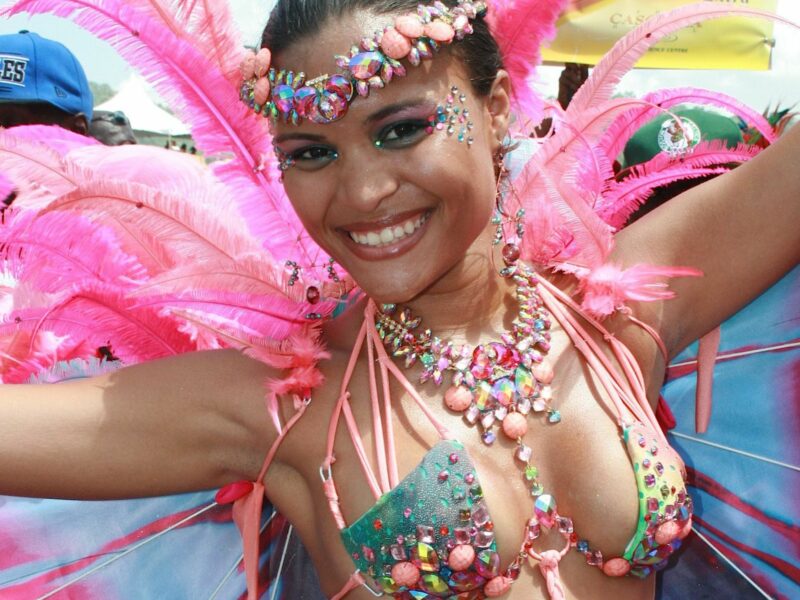 A Trinidad and Tobago Carnival masquerader, wearing a ‘bikini and beads’ costume similar to the one Lala wore in her Instagram post. Photo by IZATRINI.com on Flickr, CC BY-SA 2.0.

On October 30, like most Halloween-goers, American actress Alani “LaLa” Anthony was trying on her costume to make sure all was ready for the big night. She posted some photos on her Instagram feed, along with the caption “Never been to carnival so I brought carnival to me 🪅💜”

Many social media users assumed she was talking about the world-famous Trinidad and Tobago Carnival, where brightly coloured, heavily feathered and notoriously skimpy costumes are a feature of the annual two-day street party that precedes Ash Wednesday. The alluring photos and video Lala posted match the look and feel of the images put out by the “pretty mas” bands that design and produce these sensuous and sexy types of costumes for sale.

While most of the reactions on IG were favourable and complimentary, at least one member of the diaspora saw it fit to criticise the fact that Lala had chosen to wear the costume for Halloween — a celebration that has nothing to do with Carnival, and which has a niche (albeit growing) local following — prompting social media user Kathryn Nurse to share her frustration over members of the diaspora “speak[ing] on social media platforms as if they're the voice for all of us”:

This costume is not a cultural representation of our Carnival, [which goes] so much deeper. So when you, as a creative in the diaspora, go on your platform to make statements like the one that I stitched, [you] start to conflate Carnival with this image culturally, and it essentially waters down all the other things that make up our Carnival that we do truly consider traditional and cultural. You [also] confuse people [because] Carnival is not a spectator sport. […] We love for people to come down here [and] participate! […] Of course you can wear this; we don't care!

Echoing her sentiment was soca music star Machel Montano, who reposted Lala's IG video with the chorus of his song “10 outta 10.” While many agreed with Montano, this did not stop several other social media users from posting comments that accused Lala of cultural appropriation, the overall gist being “My culture isn't a costume.”

If this is what y’all present as Carnival to the world, why are you hurt when this is the way it is reflected back at you? https://t.co/wcCsaK59Ru

Most netizens, however, saw a clear delineation between the “bikini and beads” brand of masquerade and the traditional mas characters that are actually considered an integral part of the country's culture. In one Facebook thread, Jamil Agard quipped:

So she culturally appropriated the swimsuit and beads outfit popularized by 20th century US stage acts and Brazil and made in Chinese sweatshops?

In another thread, Kirk A Inniss commented:

Talk about being extra over nothing. A setta follow fashion Internet warriors falsely linking carnival wear to some sacred cultural connection. Anyone can wear this at anytime in any setting they feel like.

It’s called a Carnival COSTUME for that purpose. Some of y’all enjoy being extra.

It's basically free promotion for the culture by a prominent celebrity. I bet you she got at least a few million of her 13.5 million followers who didn't know before, curious about it. But narrow minds can never see the bigger picture 🖼️ 🙌🏾

Some of these responses are so jokey. Since when are these costumes exclusive to ‘our’ culture?

Even Michael Zephyrine, who admitted he was “all for cultural gate keeping to an extent,” admitted:

Riffing off of the late cultural visionary Tony Hall, who once said that no new carnival characters had been created since World War II, Rubadiri Victor examined the Carnival versus cosplay issue in a 2016 Facebook post. His theory is that “Halloween and Cosplay is rising [because] the proportion of people willing to go through elaborate lengths to create and don Cosplay and Halloween costumes vastly outstrips those willing to don Traditional Carnival costumes”:

Why? Because more BELIEVE in Avengers, Vampires, Batman, and Freddie Kruger than BELIEVE in Fancy Indians, Pierrot Grenades, and Midnight Robbers. Simple. Hollywood has usurped [our] Folklore, and Mythology now. The old Traditional Mas characters and the next generation of Characters that should have been created by an evolving Society have been aborted by the lack of Local Content and support for the local Arts.

While most commenters seemed to agree that had Lala donned the costume of a traditional mas character for Halloween, the cultural appropriation allegations may have had a leg to stand on, Victor advocated incentivising parts of the Carnival street parade for cosplay and Halloween-inspired costumes:

[T]he issue is to get people first and foremost to believe in MASKING again and everything else flows from there. I believe that once the generation begins to engage the technical and conceptual leaps necessary to create costume for the road — costumes that they feel relevant to their interior lives and Imaginations THEN A NATURAL PROCESS OF INDIGENISING WILL HAPPEN. So let Batman, Superman, Joker, and Gandalf take the road…

And perhaps, let Lala take Carnival — at least the mass-produced, culturally insignificant part of it — to Halloween.