Many Jamaicans are nervous. Here's why

The country is wrestling with an uptick in violent crime 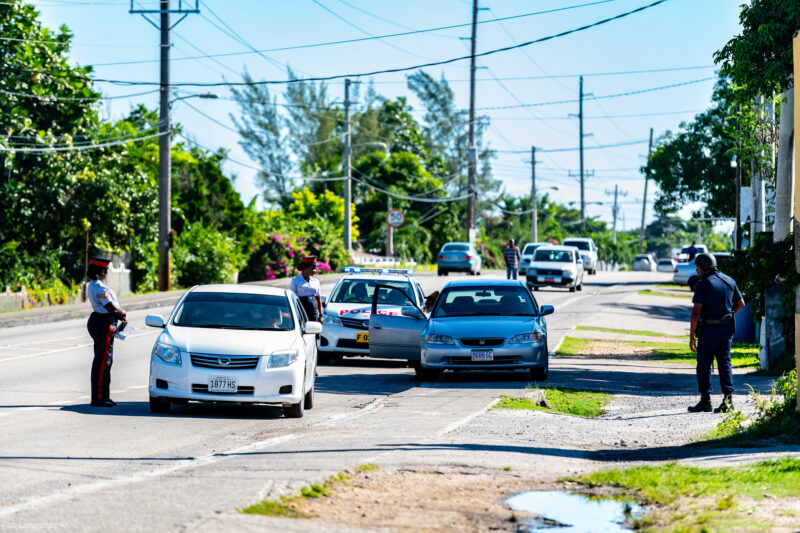 Police officers from the Jamaica Constabulary Force (JCF) do a traffic inspection in Runaway Bay Jamaica. Photo by Rab Lawrence on Flickr, CC BY 2.0.

A version of this post was originally published on Petchary's Blog, and is republished here with the author's kind permission.

This is not a comfortable thing to write about, but I must, because it is about our way of life; about how Jamaicans manage, daily, on this beautiful island.

It was Twitter that got me thinking. One tweet recently observed that despite COVID-19 being firmly behind us (we have not had a pandemic-related update from the Ministry of Health and Wellness since September 30); despite the improvement in the unemployment figures, especially for women, and despite the uptick in business activity and confidence, there is a dark and heavy atmosphere in the country.

Shouldn’t we all be feeling positive and happy? Yes, but there’s a shadow: the lingering atmosphere of crime and violence. Our fundamental sense of safety and security has been compromised. We don’t feel safe when we are out in public, and sometimes not at home either.

Another simple question was asked by one Twitter user:

It’s hard to realise the impact crime has on your life in Jamaica until you leave. What are some things that put you on high alert here that wouldn’t make sense in other countries?

He received a flood of replies. Looking through them, I noted the following everyday situations that make us nervous when we are out in public, and some of the things we do to make ourselves feel safer:

Is that list long enough for you? I can honestly say that my husband and I can relate to 90 percent of the above. We feel that anxiety, quite regularly. On Twitter, most — though by no means all — of the replies were from women, who feel increasingly vulnerable, especially when they are alone.

As they say, “Who feels it, knows it.” It is our life — and not only in Kingston, by the way. People are afraid of bushes too, and trees, and who may be hiding behind them. And strangers, especially if they are male, and empty roads.

There may be some level of paranoia — and perhaps even hysteria — at play, and many argue that these anxieties apply equally well to other towns and cities overseas. I remember being given a long lecture about security in Rio de Janeiro years ago, and being anxiously guarded by a Brazilian when I went out to the night market, so it’s all relative.

However, this is our daily life. We are hunkered down. We are tightly wrapped inside ourselves. We are on the lookout, just in case. Things we used to do, we don’t do them anymore.

So what to do?

In an effort to be seen to be doing something, the government has introduced a gun amnesty that will run from November 5-19. It hopes to encourage those with illegal or unregistered firearms and ammunition to surrender their weapons without the threat of prosecution — but only time will tell whether it will make a dent in violent crime. The problem goes much deeper, and needs to be tackled at its root.

Where to begin? As my father would have said, “Answers on a postcard, please…”