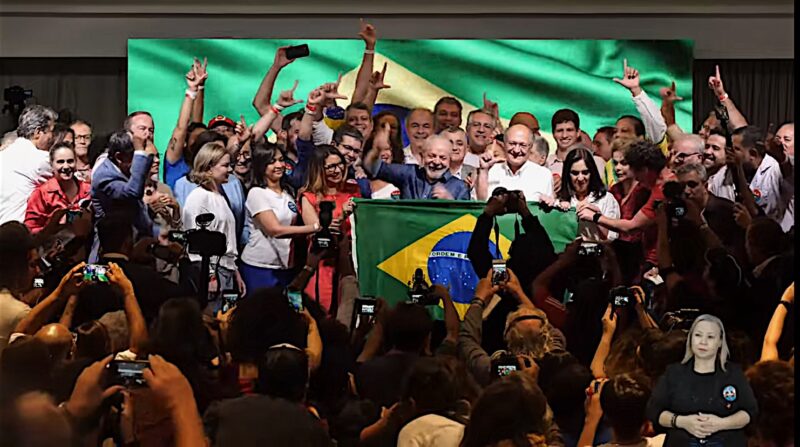 Lula and his vice-president elected Geraldo Alckmin, in his first speech after results of the election were confirmed | Image. Screenshot/YouTube PT

A slim difference of 2,139,645 votes gave Luiz Inácio Lula da Silva 50.9 percent of the Brazilian electorate, a third term and made him the most-voted president in the country's young democratic history.

In the October 30 runoff, Lula defeated Bolsonaro, with a record-breaking count of over 60 million votes, against the current president's 58 million. Almost 4 million voters were annulled, which is seen as a protest vote in Brazil, and another 1.7 million people submitted blank ballots.

The tweet published by Lula's official account to celebrate his victory became the most liked one in Twitter Brazil history with over 1.4 million likes and just one word:

This election confronted, on one side, Lula's Workers’ Party history of social programs advances, but tainted with corruption scandals in the past, and on the other, Bolsonaro's record-breaking deforestation rates, denial of the COVID-19 pandemic, delaying vaccine purchases, corruption allegations, increasing national hunger rates and poverty levels, the president's own rhetoric and attacks to the Supreme Court and critics.

In a campaign marked with disinformation allegations, Bolsonaro tried to get support from Congress with “secret budget” payoffs and bet on expanding federal expenses toward several programs with the hopes of gaining votes among the poorest. While Bolsonaro was a hard critic of PT's Bolsa Familia social aid when he was in Congress, during this campaign he publicly touted how much he pays with his own Auxilio Brasil.

The impact of the measures launched by the government to increase social expenditure during the electoral period surpasses BRL 68 millions BRL (around USD 13 million) only in 2022, according to Valor Economico newspaper, based on data from constitutional amendments and the Economy Minister.

The campaign was also marked by cases of harassment. In evangelical churches, pastors reportedly pressured and threatened their congregations to vote for Bolsonaro, which led many to stop attending services and masses.

Workers also reported harassment at the workplace, as some bosses pressured them to vote for their preferred candidate, with a 3,000 percent spike in reports between the first and the second round. Many threatened to fire workers if Lula was elected.

On the runoff day, there were reports of the Federal Highway Patrol causing delays and traffic jams, while stopping and searching vehicles, opposing an order of the Electoral Court (TSE). The reports were mainly in regions where Lula was a favorite, like the Northeastern states.

Bolsonaro has also taken longer than any candidate in 20 years to concede. On November 1, he made a public statement of about two minutes, but never mentioned Lula or conceded to his victory. His speech was limited to thanking the votes he received, praising as legitimate the protests obstructing highways for not accepting the result, but asked his supporters to guarantee others the right to come and go.

According to reports in the Brazilian press, after Lula’s election was confirmed, Bolsonaro turned off the lights at the Alvorada Palace — the presidential residence — and refused to talk to allies. His current VP, Hamilton Mourão, who was elected senator, had a phone call with Lula's VP the following day.

Stephen Bannon, the sentenced Trump adviser who is close to the Bolsonaro family, told Folha de S. Paulo newspaper that Bolsonaro should ask for a recount and refuse to concede the presidency until it's done.

Bolsonaro, who challenged the voting system for over a year prior to the elections, despite being elected with the electronic ballot five times, asked the Armed Forces to do a parallel counting of the vote and report on it since the first round. This report hasn’t been released yet, even with recurring demands from the Electoral Court.

The result of the most polarized election in Brazil’s history brings many reflections and the necessity of searching for paths of pacification of a country literally split in half. It’s time for serenity.

Carla Zambelli, a bolsonarista federal deputy reelected, who infamously chased and pointed a gun at a Black man, a Lula supporter who had a political argument with her and her team, in the runoff eve, also acknowledged the results publicly:

Even if I walk through the valley of the shadows, I shall not fear, for The Lord is with me.

The dream of freedom of over 51 million Brazilians is still alive.

And I PROMISE you that I’ll be the opposition that lula has never imagined having.

Later, with reports of bolsonaristas blocking highways in protest for the outcome, some asking for military intervention, Zambelli tweeted:

Congratulations, truck drivers. Keep on, do not give up.

On the night of October 31, without any move from Bolsonaro's government, Alexandre de Moraes, the president of the Electoral Court, ordered the roads to be liberated, with the head of the Highway Federal Patrol risking being arrested if not complying.

Millions of people took to the streets to celebrate Lula’s election throughout the country, on the night of October 30, like on Paulista Avenue, a famous São Paulo's location for political protests. In one of the speeches after his election confirmation, Lula said:

This is not my or the Workers’ Party win, neither from the parties that supported me in this campaign. It’s a victory of an immense democratic movement that was formed, above political parties, personal interests and ideology, so democracy could be the winner.

In his speech, the president-elect reinforced his commitment to social programs, fighting hunger and deforestation rates, and protecting Indigenous people, while working for economic development.

During his speeches, Lula was accompanied by the VP-elect, Geraldo Alckmin, who was his opponent in 2006 when he was reelected for a second term. A former governor of São Paulo, Alckmin was affiliated to PSDB for years, a party that endorsed Dilma Rousseff’s impeachment and was a traditional PT rival, and has a center-right profile.

Another prominent figure standing by Lula's side was senator Simone Tebet, who ranked third in the first round and campaigned for Lula in the runoff. Tebet is from MDB, the party that led the process and took the presidency after Dilma’s impeachment, which she voted in favor of.

During the campaign, Lula also gained support from other figures more aligned with economic liberalism, such as former economy minister Henrique Meirelles and Joao Amoedo, a millionaire who ran for president in 2018, and is now suspended from his own party for publicly declaring he would vote for the former president.

Although Lula's election is another comeback for the left in Latin America, it is yet to be seen how progressive his administration will be. With over 15 parties supporting his bid, his government may have to make concessions and compromises with a variety of political agendas.

He will also have to negotiate with a pro-Bolsonaro conservative Congress. Among those elected this year is Sergio Moro, the judge who sentenced Lula over corruption charges in a process later annulled by the Supreme Court that considered him to be biased. Moro then became a Bolsonaro minister and will be a federal senator starting in 2023.