How does Xi Jinping's re-election in China affect Latin America? 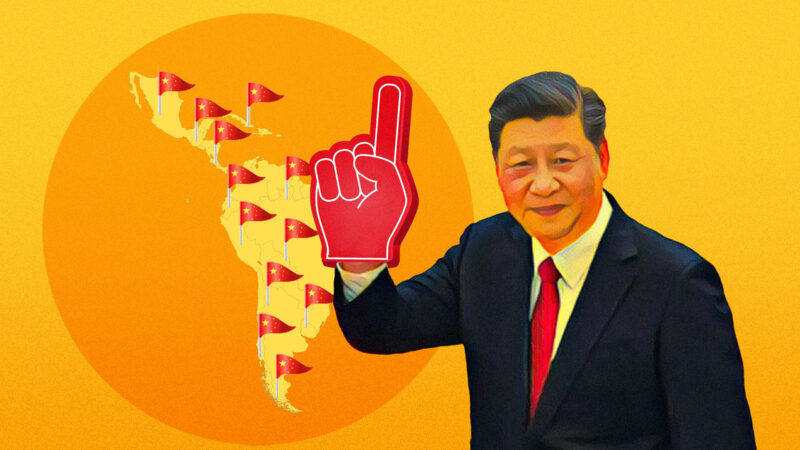 Global Voices edited and republished this article by Carlos Gutiérrez for Connectas under a media agreement.

In a monumental ceremony, very much in the Beijing style, Xi Jinping assumed his third term as General Secretary of the Communist Party of China (CPC) at the age of 69. He did so in the midst of a personality cult scenario and with a politburo that does not guarantee generational replacement since all members are men over 60 years of age. For many, Xi's era is a new chapter in China's contemporary history: he already has a power that has not been seen since the time of Mao Zedong.

As journalist Georgina Higueras points out in a text entitled, “China: everything under the sky,” Xi seeks to achieve a “sort of omnipotent power that embodies Chinese ethical and moral values” and to highlight the ancestral values of “peace, stability, and order, as opposed to the Western values of democracy and human rights.” With this, he says, “China has looked to itself to resume the role of promoter of global governance,” in order to face the new challenges of the contemporary world.

Amidst these grand designs, China's presence in Latin America and the Caribbean is ever more significant. “It is here to stay,” writes Madelein Carolina González, a scholar at Beijing International Studies University, in an article published in the academic journal De Gruyter.

Ties between Latin American nations and the People's Republic of China (PRC) date back to the late 1970s, but began to grow since the beginning of this century and have strengthened since the Covid-19 pandemic. “They have found a new direction of development, with more opportunities for growth and mutual benefit,” González says.

A question inevitably arises in this context: what are the implications of Xi Jinping's ongoing leadership of China for Latin America and the Caribbean? To answer this question, we must first understand what this new period means for China. It is a bid by the CCP to achieve “stable leadership,” as Higueras says, in a “conservative phase of accumulation of power.” The party criticizes what it considers “the populisms generated by the ‘pernicious individualism’ of Western democracies.”

In his biographical book, Huron University scholar Alfred L. Chan asserts that the ruler's reputation is often controversial and non-Chinese opinions of him tend to be negative and exaggerated. Many things are said about him, from the fact that he has a boundless ambition to the fact that he dislikes being contradicted. Nor is there any shortage of those who compare him to Stalin.

For Miguel Ángel Urrego, a researcher at the Universidad Michoacana de San Nicolás de Hidalgo, Xi has guaranteed China's political and economic stability, with a special interest in its foreign policy and in creating strategic alliances with Latin American and Caribbean nations. “China is an ideal trade partner because it has a huge market, demands a lot of raw materials, generates loans, investment projects, et cetera. It is a new source of resources for Latin America, and for that reason, there is a mutual benefit, in quotation marks, in the new trade relations.”

González finds that Xi has fostered a “proactive foreign policy” with Latin America and the Caribbean. For their part, the nations of this subcontinent “found an outstanding partner and lender,” he describes. In this way, “Latin America became China's main investment destination.” It is currently the main trading partner of Brazil, Chile, Uruguay, Argentina, and Peru, in addition to having free trade agreements with the latter country, as well as with Chile and Costa Rica.

However, as scholar Daniel Lemus warns, China's foreign policy has sought to strengthen the image of the Communist Party “as an effective element to provide Chinese citizens with what they need;” mainly, it seeks to guarantee the supply of natural and energy resources. This has led to the recurrence of a neo-extractivist model, especially in South America, where China imports unprocessed raw materials from Latin American countries, and in exchange receive processed Chinese inputs.

“China has gained a lot of space in Latin America and one of these characteristics has been, precisely, that it has deepened or helped to develop extractivism or neo-extractivism,” confirms David Cruz, researcher of the Colombian association Ambiente y Sociedad. He also points out that the impact on the environment and human rights has been neglected in these activities.

The arrival of new left and center-left governments, as well as the loss of U.S. influence, is another reason for China's increased presence in the subcontinent. In an article on the effects of U.S. and Chinese foreign policy in Latin America, Argentine academic Gonzalo Ghiggino argues that the United States has lost global leadership “for the first time since World War II.”

China has taken advantage of this vacuum to position itself as a better option for doing business and encouraging investment. According to Ghiggino, the health crisis caused by the pandemic was fundamental, and it is likely that “Latin American countries have more confidence in Beijing than in Washington.” The former's willingness to cooperate contrasted with the latter's lack of solidarity during the worst moments of the health emergency. Likewise, he considers that China has a better chance of boosting Latin American economies toward recovery.

González points to one of the new Chinese projects in Latin America: “Practical Cooperation 1 + 3 + 6,” which seeks to “create a unified roadmap between China, Latin America and the Caribbean” and prioritizes six areas: “infrastructure, information technology, culture, manufacturing industry, energy and resources, scientific and technological innovation.”

Xi's re-election is not a minor issue for Latin America. Sandra Zapata, a researcher at the Friedrich-Alexander University Erlangen-Nürnberg in Germany, recommends paying attention to Chinese foreign policies in the coming months. “Possibly we are going to see more accumulation and centralization of power in Xi and the decisions will not be those of Beijing, but those of Xi, those of the leader, and that substantially changes the game board of international analysis,” she says.

For the time being, there are no signs of a confrontation between the United States and China to conquer the Latin American market. However, in an anecdotal but significant development, a group of U.S. congressmen recently met with Colombian President Gustavo Petro and warned him that excessive friendship with China could be costly, a price that would be made dangerous by the risk of conflict if China invades Taiwan, as many indications suggest. If that happens, Zapata analyzes, Latin America will have to “define its alignments with China, which is the emerging power, or continue with the United States and think strategically about what its links with these two global players will be.”