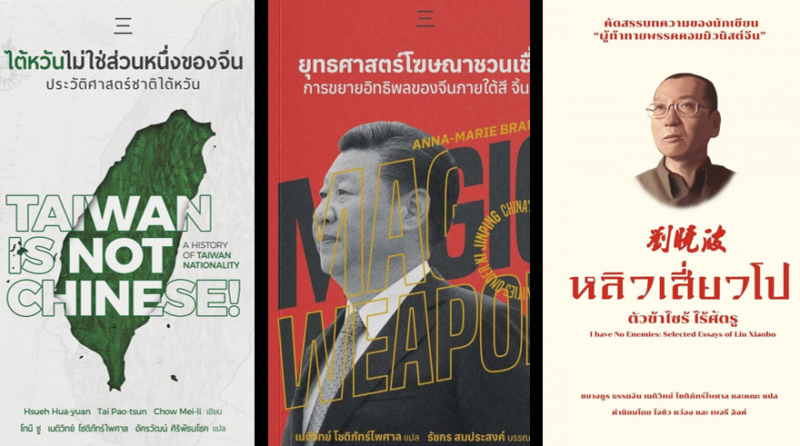 Some of the book titles by Chinese dissidents translated into Thai and published by Sam Yan Press.

Sam Yan press, a student-run publishing house in Thailand, revealed that it received an offer from a Bangkok-based private firm to stop operating in exchange for 2 million baht or USD 52,770.

Sam Yan was founded in 2017 by student activist Netiwit Chotiphatphaisal to promote books on democracy. Over the years, it has published books by well-known Chinese dissidents such as 2014 Hong Kong protest leader Joshua Wong, 2010 Nobel Peace laureate Liu Xiaobo and jailed Uyghur academic Ilham Tohti. It has also supported the pro-democracy #MilkTeaAlliance initiated by activists in Thailand, Hong Kong, and Taiwan.

After having collected evidence on this matter, we were concerned about our security and reluctant to publicize this. But today we decided to speak up. Further details will be publicized tomorrow. Please stay informed. pic.twitter.com/PxTELeIprZ

Sam Yan said it was first contacted by the company in May. The offer was repeated in September with new information that the client was a Chinese businessman who wanted to establish good relations with Beijing authorities by showing that he has influence in Thailand.

Details of the email on September 28th, translated. (6/12) pic.twitter.com/8miccvVJRM

The offer would have required Sam Yan to issue a certificate of dissolution ahead of the 20th congress of the Chinese Communist Party earlier this month.

Sam Yan Press was approached by a Chinese businessman claiming their will to make good relations with the Chinese government and asked to shut down the company. The detailed story and evidence are shown as follows. (a thread, 1/12) pic.twitter.com/w63u8Bwva8

Sam Yan met the company's representatives to formally reject the offer. It noted that the financial offer could have paid the salaries of the company's five full-time employees for two years.

In an interview with Voice of America, Sam Yan managing editor Jirapreeya Saeboo said he believed they were targeted because of their books supporting the pro-democracy movements in Hong Kong, Taiwan, and China.

I think it’s because we have been publishing Thai books about Chinese politics and about the dissidents, about Hong Kong, Joshua Wong, about the repression in Xinjiang and recently about Taiwan’s independence.

We actually feel intimidated, but we will not change, we will still continue publishing and updating about Chinese politics and other issues as well as we did before. But we will have to train more about how to secure ourselves.

The Sam Yan board of editors issued a statement explaining why it had decided to disclose the offer to the public:

We feel grateful that the Chinese authorities recognized our work and saw the potential of the truth that we have always been demanding. At first, we were afraid of speaking up concerning our security and protection. Nevertheless, this infringement of rights and freedom of the press can no longer be kept silent.

Despite the incidents, we carry on with our tasks. We condemn every means used by authorities to harass and manipulate the challengers. Lastly, we urge all press and publishing sectors to stand up against the regime’s censorship and the cooption of independent groups.

There are no known links between the Chinese businessman and China’s state agencies but the incident reflects the increasing attempts to influence pro-China media narratives across the world.

The Sam Yan website is down as of this writing and the cause is being investigated.