Three violent acts per day during Brazil's first round of elections, according to survey 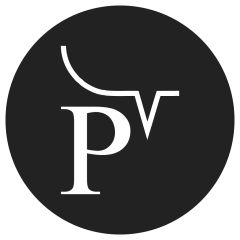 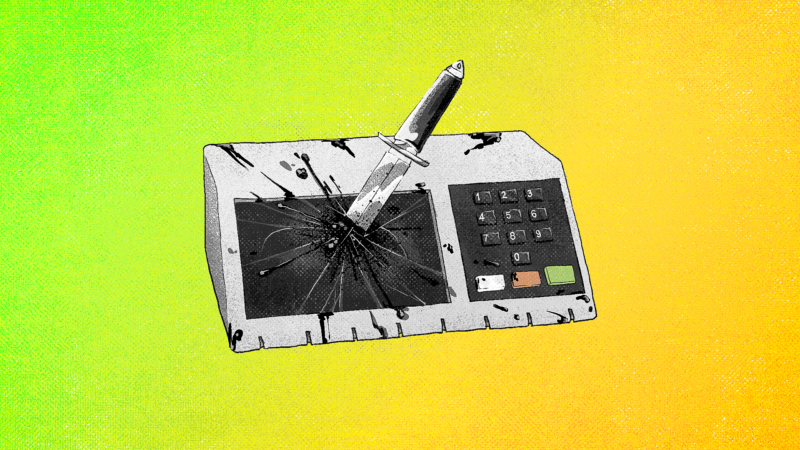 Between the official beginning of the electoral campaign in Brazil on August 16 and the end of the first round on October 2, there were at least 148 cases of electoral violence, according to an exclusive survey conducted by Agência Pública. This represents an average of three attacks per day against voters, candidates, journalists, and polling institute workers.

The violence of the attacks and the significant use of firearms is striking. During this period, at least six people were murdered for their political views. Another nine faced murder attempts.  In this survey, Publica only included in-person attacks, excluding attacks by phone, email, or social media.

The survey does not include the case of Marcelo Arruda, a treasurer of a Workers’ Party (PT) branch in Foz do Iguaçu, in the southern state of Paraná. He was shot dead during his PT-themed birthday party by a Bolsonaro-supporter, as the murder occurred in July before the campaign officially started.

Of the 148 cases mapped, 25 involved firearms. Four attacks were carried out with knives or sharp objects, with three of the murdered people being stabbed. Seventy-three cases involved physical violence. Cases of psychological or moral violence — insults and threats — tallied 99. In 29 cases, there was violence against property, such as cars or campaign committees. 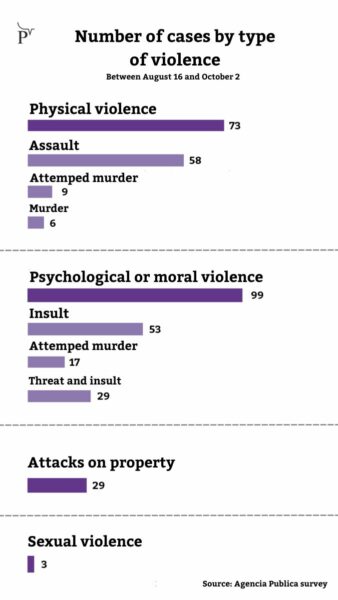 Electoral violence occurred in all regions of Brazil, but the Southeast (the most populous region, comprising the states of São Paulo, Rio de Janeiro, Minas Gerais, and Espírito Santo) accounted for the highest number, with 45 percent of total incidents.

In São Paulo alone, 21 percent of the cases took place. This may be related both to the population size — São Paulo city has an estimated population of 12.3 million — and the number of media outlets based there, which could influence the survey as it is partly based on news reports.

As well as assaults on voters, there were 54 attacks on politicians or candidates, 32 attacks on pollsters, 10 attacks on journalists, and two attacks on public officials, in this case, poll station workers.

Political violence against women represented 58 of the cases mapped over the campaign. The perpetrators were predominantly men — in 74 percent of the cases, at least one perpetrator was male. We also registered three cases of sexual violence during the elections.

One of the cases involved a São Paulo state deputy Isa Penna, who lost her bid for federal deputy. Penna filed a complaint for verbal aggression and harassment that took place during an electoral event on September 24. Penna said a man approached her, grabbed her waist, took her photo, and said “you're a bitch, you're crazy, that thing with Cury never happened” (referencing another episode of sexual assault, in 2020, when she was harassed by fellow state deputy Fernando Cury). The man was arrested and charged with sexual harassment.

The survey also identified 11 cases of violence with racist motives.

One of the most brutal cases was that of Benedito Cardoso dos Santos, who supported former president Lula. He was murdered with over 70 stab wounds and axe blows by a Bolsonaro-supporting colleague on September 7, in the state of Mato Grosso, in the central-west region of Brazil.

Arrested the day after the murder, the Bolsonaro supporter confessed to having killed Santos because of a political disagreement in a statement cited in the investigation. However, the police officer in charge of the case denied it was a political crime. According to him, it was “a crime of common homicide,” motivated by an argument about politics.

Another victim was the Bolsonaro supporter Hildor Henker, 34, who was murdered on the afternoon of September 24, in the southern state of Santa Catarina, by a man who apparently supported PT. They were friends, and the murder reportedly occurred after an argument outside the bar they were in.

The case is still under investigation, and the police are working with the hypothesis that the crime took place after an argument about politics, but have not ruled out other possibilities, such as family disputes – despite the two men not being related. In a post on Facebook, one of the victim's sisters said that it was “a murder because of politics.” The family did not want to comment.

This was reflected on the day of the first round, October 2, when 11 cases of electoral violence were recorded, including three attacks on voting machines.

In one case, a man used a piece of wood to break the voting machine right after casting his vote. The incident was recorded on video and the man was arrested.

In the other two documented cases, the voting machines were damaged with glue. One unidentified man used glue to make it impossible to operate button number 3 on the voting machine — the electoral number for the Workers’ Party is 13.

On another occasion, a poll worker and the president of a polling station were insulted by a voter who became angry when he was asked to leave his mobile phone on the table while casting his vote. The Brazilian electoral court banned the use of mobile phones at polling stations to protect the secrecy of the vote and prevent the recording of videos that may be used to spread claims of fraud in electronic voting machines.

According to Julia Moreira, another poll station worker, the man only agreed to leave his phone after one of the attendants left the room to get a security guard or police officer. He then threw his phone on a chair while shouting. He allegedly also kicked the chair in front of the voting machine.

Moreira said that this was the fifth consecutive election where she worked at a polling station, but she had never seen anything like it. She said she saw this as the result of four years of a government that validates and even encourages violence.

“This violence is associated with disinformation about the credibility of the Brazilian electoral system. This is very worrying, because the climate of distrust, the attempts to break the rules that are set, and the disrespect for the people who work as polling station attendants on election day are attempts to delegitimize the whole electoral process, as well as its results,” she said.

“Here there is no lying Datafolha [one of Brazil's main polling institutes], here is datapovo [‘povo’ means ‘people’],” Bolsonaro said in a speech at the Bicentenary of Brazil's Independence on September 7, speaking to a crowd of supporters in Brasilia. The phrase became a popular catchphrase among his supporters.

Following the president's routine criticisms and questions of opinion polls — which week after week have put him in second place, behind Lula, in the voting intentions for the presidency — at least 32 attacks have targeted employees of polling institutes, including insults, assaults, and harassment.

In one case, on August 16, a Datafolha researcher was finishing her last interview of the day in Belo Horizonte, Minas Gerais state, when four men started running after her, calling the institute “communist” and “leftist” and trying to grab the tablet she was using to do the surveys. During the attack, she fell to the ground, injuring her knees and cracking her tablet. The men who chased her only left when a woman stopped to help her.

Many poll workers report that they have been approached by people asking to be interviewed, which is prohibited by the institute's rules on electoral surveys in order to guarantee the sample's randomness. At this point, they got angry and went on the attack.

In São Paulo state, a Datafolha interviewer was beaten with kicks and punches and threatened with a fishing knife by a Bolsonaro supporter who was demanding to be interviewed.

Sociologist David Marques, project coordinator of the Brazilian Public Safety Forum, explained that political violence is nothing new in Brazil. However, the large number of cases in this election has contributed to a general climate of fear, as recent surveys show.

Seven out of ten Brazilians are afraid of being attacked for expressing their political views, according to a survey by the Network for Political Action on Sustainability (RAPS) and the Brazilian Public Safety Forum, based on data collected by Datafolha. Another survey by the institute Quaest revealed that 57 percent of respondents thought that this year it is more dangerous to say who they will vote for.

And according to a third survey by Datafolha, 9 percent of respondents said they might not go to vote for fear of political violence.

For Marques, the last four years with Jair Bolsonaro as president have been very much marked by aggressive political rhetoric. “Leaders of some political groups have relied on this rhetoric of aggressiveness, of causing fear as an instrument of political struggle, and the research shows that they’ve managed to achieve their goals: the population is more frightened,” he said.

As in 2018 and 2020, Pública will continue to monitor cases of electoral violence until the second round, using news published in local and national media and reports sent by our readers.