"What is happening in Iran could occur in Indonesia" 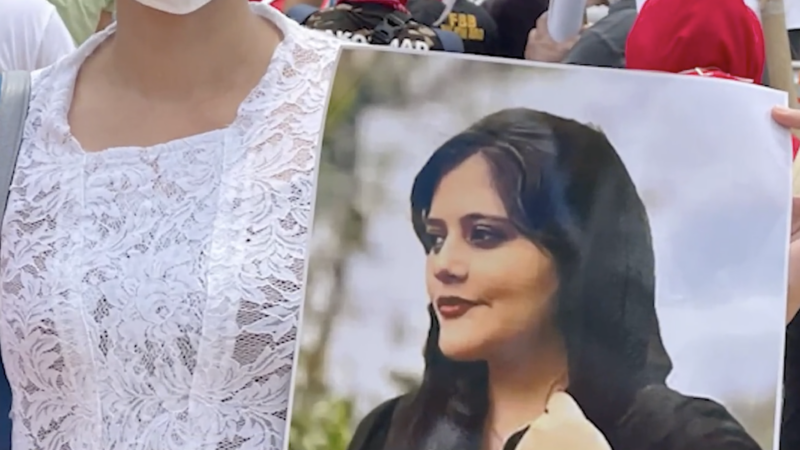 An Indonesian protestor in a traditionally Kabaya shirt, holding a photo of Mahsa Amini. Photo via Arab News YouTube

Since mid-September, Iran has been roiled by revolts and protests after the death of Mahsa Amini, 22, in police custody. Amini was arrested for failing to properly wear her headscarf — a mandatory practice for women in Iran since the 1979 Islamic Revolution. Her death has sparked worldwide protests and triggered discussions about women’s freedom, censorship, and state oppression. Unsurprisingly, these discussions have resonated in the world’s most populous Muslim country, Indonesia, where protests have sprung up supporting Amini, the women protestors, and Iran’s struggle.

On October 18, hundreds of Indonesian supporters, members of civil society organizations, and members of the Iranian diaspora gathered in front of the Iranian embassy in Jakarta to protest Iran’s brutal crackdown on protestors, the harsh treatment of women, and the arrest of Iranian journalists. Among the civil society organizations attending were representatives from Galaruwa, Indonesia Awakening, the United Betawi Forum, the Concern for the Nation People's Movement, the Nusantara Dai Forum, the National Dayak Traditional Community Brigade, and others.

Protestors waved Iranian flags, photos of women killed in the crackdown, and held signs saying, “stop killing innocent people,” “In Indonesia, different religions and ethnicities are still harmonious,” and “women, life freedom” — which has become a popular refrain for protestors globally in support of Iran.

Some 10 women at the protest cut their hair in solidarity with women in Iran. In most of Indonesia, hijabs and religious symbols are optional, with the exception of Aceh province in northern Sumatra, which requires head scarves for Muslim women.

Protestors and civil society organizers are calling on Indonesia to use its position as the nation with the world's largest Muslim population to pressure Tehran to stop the violence and oppression. Ririn Sefsani, a women’s rights activist and one of the protest organizers, told Arab News:

We urge the Indonesian government to use its power as the country with the largest Muslim population in the world, so the Iranian government stops all forms of violence, including the abduction and murder of its people who are calling for reforms in Iran.

Protestors are also calling for the release of journalists who had been arrested during the Iran protests. Andreas Harsono, one of the founders of the Alliance of Independent Journalists (AIJ) and a researcher for Human Rights Watch Indonesia, told Arab news:

“It will be difficult for any country, including Iran, when press freedom is silenced and journalists are imprisoned,” he said.

The Iranian Embassy in Jakarta made no public comment acknowledging the protest outside its doors, though since the unrest began in mid-September, the Iran Embassy in Indonesia has continually shared pro-state material meant to boost Iran's reputation around gender and women's rights via its Twitter account.

Threats to freedom at home

Some activists warn that rising conservatism in parts of Indonesia means that women in Indonesia could lose their own right to choose. Though the national government has banned compulsory religious attire in schools, on a local level, it is becoming increasingly common for Indonesian public schools to require girls to wear hijabs in class – either directly or through robust social pressure.

Donna Swita, an activist at the Institute for Women’s Empowerment in Aceh province of Indonesia, one of the most conservative parts of the country, and the only region to implement Sharia law, says she has been arrested, harassed, and intimidated by the police for not wearing a head covering.

“It’s not only in Aceh, it's spreading around the country,” she told the UK-based Telegraph.

A 2021 report by Human Rights Watch (HRW) detailed rising conservatism and fundamentalism in Indonesia. The report, titled, “‘I wanted to run away’: Abusive Dress Codes for Women and Girls in Indonesia,” discussed rising conservatism — particularly in rural villages; instances of abuse and harassment against women and girls who chose not to wear religious or conservative clothing; and inconsistent responses from President Joko Widodo (Jokowi) and the federal government.

The report was written by Andreas Harsono, a senior researcher at HRW Indonesia. The report read:

Over the past two decades, women and girls in Indonesia have faced unprecedented legal and social demands to wear clothing deemed Islamic as part of broader efforts to impose the rules of Sharia, or Islamic law, in many parts of the country. These pressures have increased substantially in recent years.

Similarly, the editorial board of one of Indonesia's top newspapers, The Jakarta Post, published an editorial on September 28th, raising concerns that if rising Islamic fundamentalism is not curtailed, Indonesia could face similar threats as Iran, “The media, however has failed to remind Indonesian audiences that what is happening in Iran could occur in Indonesia.” It went on to say:

Indonesia, the world’s most populous Muslim country, is known as a representation of moderate Islam. But the tragedy in Iran could happen here if the state does not withstand the temptation to control the private lives of its citizens in the name of religion or ideology.