"As I face death every day, I understand the meaning of life better." 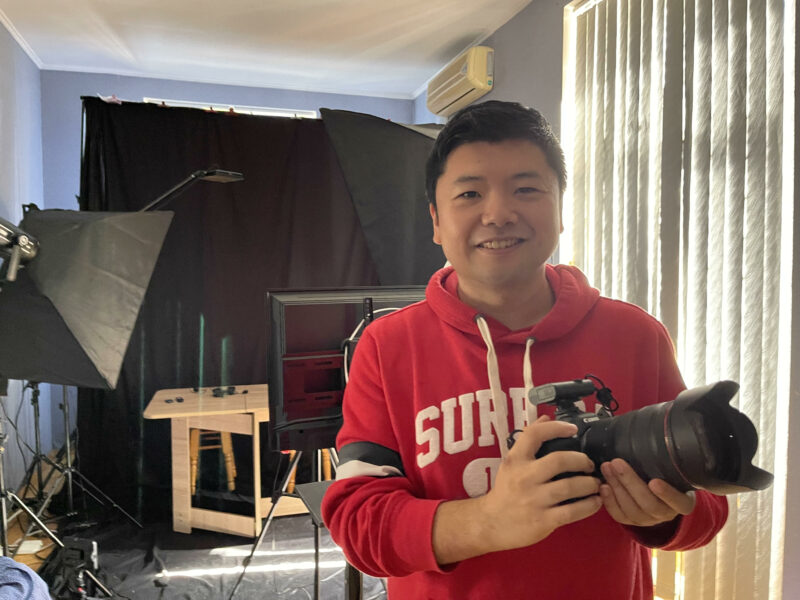 Wang Jixian is an IT businessman who is originally from Beijing but moved permanently to Odesa in the fall of 2021. After Russia invaded Ukraine on February 24, 2022, he reactivated his YouTube channel and started posting videos to show his life in his new hometown. Eight months into the war, he shared his experience of living in a country at war and his journey of broadcasting his story to Sinophone audiences in an interview with Global Voices (GV)

Wang has no background in media or activism, yet once he began to post videos on both Chinese social media and on YouTube, his popularity exploded. Almost all Chinese citizens left Ukraine after Russia started its second invasion, and there are no Chinese journalists reporting from Ukraine. This sudden visibility soon became a challenge: He was banned on Chinese social media for sharing stories that contradict Beijing's narrative. Beijing has more or less copied Moscow's discourse about Ukraine “crawling with Nazis.” He also received death threats from trolls and nationalists from China accusing him of having “sold out to the West.”

On the other hand, he became a global media celebrity and was featured in a documentary series nominated for the Fernsehpreiss award in Germany. Today he continues to update his YouTube channel, where his short videos often gather as many as 50,000 views, as well as a large number of comments in Chinese from China, the global Chinese audience, Hong Kong, and Taiwan.

In his videos, he describes his own journey and how the ban on Chinese social media has impacted his relationship with China as well as his ability to stay in touch with family and friends. He also talks about how people in Odesa are affected by daily air raid alerts yet are maintaining their traditional lifestyle as a resort and global trade hub on the Black Sea. More recently, he started mentioning his personal life now that he has met his new love Dasha, who comes from Luhansk, a region of Ukraine under Russian occupation.

GV met with him in Odesa and interviewed him in Chinese in his flat-turned-YouTuber studio. The first question was about the biggest changes in his life eight months into the war. Wang responded:

A lot of things have changed, perhaps most importantly: I have found my love, and she has made my life more meaningful.

After so much time I have started to adapt and get used to [online] haters, and have come to understand their methods, and that this is their job. Perhaps my heart has become more mature: The war is still going on, and I hear air raid sirens and missiles every day, but my emotions are toned down, I am more calm in the face of life and death. As  I face death every day, I understand the meaning of life better.

GV asked him what it feels like to become a social media celebrity:

Thank you for your assessment, I actually never really thought that I would become a Chinese Youtuber before! Like many Chinese people, I have deliberately avoided political issues, and instead tried to share content about food, drink and fun. But now I realize that you can't separate politics from life.

My position is to say no to tyranny and lies. Because it feels like when you watch when a wounded person who is calling you put for help, yet you turn away. That is not the life attitude I have experienced in Europe.

Everyone's speech is obviously much more free on YouTube and Twitter. I can hear pros and cons, people sharing different opinions, and not the unified voice of political correctness as on platforms inside China where when voices differ, it is mostly to conduct personal attacks, psychological harassment, and very rarely to actually debate about the topic itself.

I have to say, the death threats did decrease a bit, or maybe I'm getting more used to it. After such a long time, there are indeed a small number of people persistently chasing and scolding me every day. I think they are still very dedicated in terms of their work. I just hope that they can use their precious lives to do more meaningful things. .

My content and what I express are more aimed at awakening people's ability to think independently. I don't want to simply convey a different point of view to everyone; that would be no different from the model of education endorsed by the Chinese Communist Party (CCP).  For example, I don't say “Down with the CCP”,  rather, I show everyone what CCP party members and leaders have done, analyze whether that is good or bad, and let everyone think about whether such things really happened, why they deal with it this way, and how others deal with it in other countries. The thing is I don't want my content to be too boring. Content in the format of boring university lectures is not conducive to dissemination, so I try to express my point of view in a humorous and ironic way, so that the content gets even more shared.

Why are they angry? Because they are afraid. I think that what “they” are most afraid of are not the people who oppose them, who lack brains and shout “Down with the CCP” every day. What they fear most are voices that can awaken people to think independently. Because this conflicts their policy of controlling speech, of maintaining people in ignorance.

There are several reasons why people threaten me. They want to get attention by opposing me, of course, they are not opposing only me but, it seems, anyone who disagrees with the CCP.  They usually do not issue death threats , but discredit, belittle, twist meaning, in various ways. The people who are really irritated by  content like mine are not the same group of people who make threats and harassment. Those “cyber thugs” are just doing their job, but they don't know me or understand me.

GV also asked him how life in Odesa is being affected, though the city is not on the frontline and has been, so far, relatively spared by destructions, with a few exceptions (link)

Yes, Odesa is not on the front line, although there are occasionally missiles falling here. I see people in this city living tenaciously, “Even if missiles have killed us, life continues , we shouldn't be ruled by fear” is the attitude. Overall, our biggest life change so far is the daily curfew [from 11PM to 5AM]

This was originally a touristic city with a rich nightlife. Probably since September, a strip club has started to operate and it is believed business that this is the first time in the world that it is open during the day. Therefore, tourism-related economic industries have been hit hard. Road Traffic has been impacted as many bridge roads have been destroyed.

In addition, prices also rose proportionally with the devaluation of the currency caused by the war, but this is a common phenomenon. The rent here has dropped a lot, though. The flat I live in had a rent of US $500 before the war, now it is US$300.

It is surprising that the shipping system in Ukraine has been restored. It takes less than a day for things to reach Odesa from Kyiv, and three days from Odesa to front-line cities.

So what do people in Ukraine need the most at this point?

I appreciate the angle of your journalistic question. Your question is more objectively concerned with the impact of war on people's lives. Some reporters take this opportunity to interview me and ask me, “What do you think of the situation in Eastern Ukraine after the declaration of independence?” , “Ukrainian troops attacked Eastern Ukrainian region”.  As if this war was not a war of aggression conducted by Russia.

I just want to represent the life of a real person, yet it seems that in some places, being genuine is not acceptable.