Explaining the 20th Congress of the Communist Party of China: Struggle and fight

Xi Jinping is consolidating power within the Chinese Communist Party 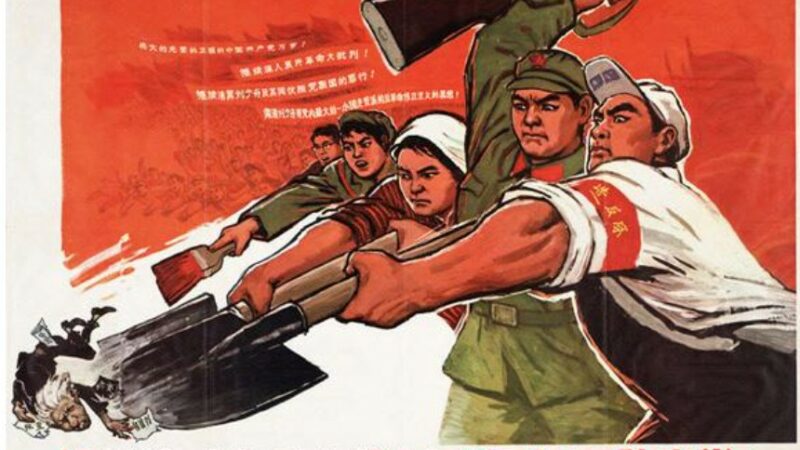 A poster from the Cultural Revolution calling for people to rise up and fight against the party's revisionists. Public domain image via libcom.org

The 20th Congress of the Communist Party of China (CPC) closed on October 22. As expected, the party's Chief Secretary and Chinese President Xi Jinping secured his third term as the party’s top leader for another five years. Global Voices is publishing a series exploring the language used during the 20th congress and analyzing its implications for China, the CPC, and free expression in the nation. Find the first article here.

Yet, rather shockingly, his colleagues and experienced top officials, including Li Keqiang, outgoing Premier, Wang Yang, outgoing chairman of the National Committee of the Chinese People’s Political Consultative Conference, and Li Zhanshu, outgoing chairman of the National People’s Congress, have vanished from the 204-member list of the Central Committee. The six incoming men in the new Politburo Standing Committee are all Xi’s loyalists. This implies that the party's top body will exclusively be made of voices that agree with Xi Jinping.

This new power makeup is reflected in Xi's frequent use of the word douzheng 鬥爭 in Chinese and translated as a “struggle” or “fight” in his report at the 20th CPC Congress.

The Chinese word, douzheng was used in Xi Jinping’s opening address 22 times. The fighting spirit is even strong if taking into account another affiliated term fendou 奮鬥, which means “strive” or “struggle” in English also appeared 28 times in the same speech.

In the introductory paragraph, Xi stressed the party must have the courage to struggle and be skillful at fighting (务必敢于斗争、 善于斗争). In fact, a resolution was passed at the closing session of the Congress to codified this fighting spirit in the CPC’s constitution. The party’s resolution states:

“Dare to struggle and dare to win” is the invincible spiritual power of the people's party. The party and the people earned all the achievements through struggle and fight. The Congress, hence, agreed to include “enhancing the fighting spirit and ability to fight” into the party constitution. This added content would boost the party’s confidence in history… understand and get hold of the new features in the grand historical struggle, unite and lead people of all ethnic groups to gain the achievement of socialism with Chinese characteristics in the new era…

To Beijing's dismay, the conspicuous composition of the Standing Committee of the CPC's Politburo, along with the emphasis on struggle and fight, led many overseas Chinese dissidents to believe that the unexpected episode of former top leader Hu Jintao’s being escorted away from the Congress hall during the closing session was a result of internal party struggle:

But some China critics, such as Han Lianchao, cautioned against over-interpretation of the closing drama.

The political use of the Chinese term douzheng originated from the translation of the Marxist idea of class struggle, which is a concept to describe a political process of the proletarian's fight against the exploitation of capitalists.  Since the establishment of the People’s Republic of China, the CPC, under the leadership of Mao Zedong, has used the idea of “class struggle” to launch its political campaigns, including the Land Reform Movement (1948–1950), and the anti-Rightist Campaign (1957–1959). Under the theory of “the continuing class struggle under socialism,” Mao mobilized the grassroots to struggle against “revisionists” from within the CPC, which eventually led to the Cultural Revolution (1966–1976), a ten-year political turmoil where tens of millions of intellectuals and officials were persecuted and purged.

However, Mao’s ideologies have been percolating since 2012 as Xi Jinping revived the term “struggle” through his ideology campaigns to silence online critics, control all media outlets, and launch nationwide anti-corruption campaigns, which resulted in the punishment of more than 4.5 million party and government officials in the last 10 years.

In Xi's latest Congress report, the term douzheng has further extended to all policy areas, including fights against separatists, religious extremists, terrorists, foreign containment and interference, corruption, bureaucracy, the fight to strengthen military power, and more. Xi concluded his political mission as “a united struggle to revive the Chinese nation and build a modern socialist country in all aspects” in his speech.

@winston: Mao Zedong: “Such a great joy to fight the heaven, the earth and the people”. That’s why he tortured Chinese people for 30 years (placing the high-end population in cowsheds and sending the low-end to rural villages). Now Xi Jinping embedded the struggle tactic into the party constitution. The subordinated mainland Chinese be prepared to experience the torture that your father’s generation had gone through.

Li Qiang is the CPC head of Shanghai city. Many believed that he got his ticket into the standing committee of the Politburo for being supportive of Xi’s zero-COVID policy. As for Cai Qi, he launched a campaign to kick out the low-end population from Beijing in 2017 when he was the city’s party chief. After that, he quickly climbed the political ladder within the CPC. The other four members, Zhao Leji, Wang Huning, Ding Xuexiang, and Li Xi are also Xi’s loyalists.

As Xi Jinping’s power within the CPC is fully consolidated, the essence of the upcoming “struggle” sounds more and more like a bid for total social control, as some political analysts suggested:

“They all believe that China, with its vast surveillance systems and punitive social control, now resembles Stalin’s Soviet Union and Mao Zedong’s China. In their view, even Russia and Iran have more space for dissent.” https://t.co/8bzDRXg8mu