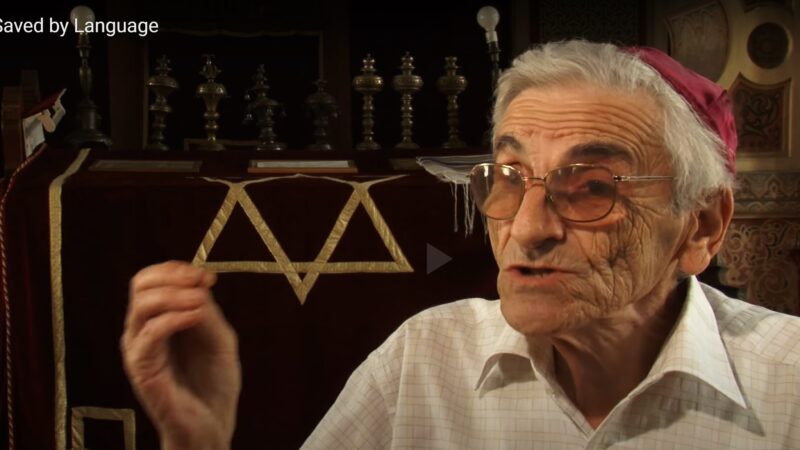 Moris Albahari in 2012. Screenshot from the documentary “Saved by Language” by Susanna Zaraysky and Bryan Kirschen, used with permission.

Moris Albahari, one of the last speakers of the Ladino language in Bosnia and a guardian of the Jewish tradition, passed away in Sarajevo at the age of 93, N1 TV reported.

Ladino or Judeo-Spanish is a Romance language derived from Old Spanish, which spread through the Ottoman Empire, North Africa and other European countries after the expulsion of Sephardic Jews from Spain in 1492. The language is considered endangered.

According to BBC reportage “The Bosnians who speak medieval Spanish,” only four living people continued to speak Ladino or (as they call it) Jidyo in Bosnia in 2018, and one of them was Moris Albahari.

Albahari was born in 1930 and, as 11-year old boy, escaped the transport to Nazi death camps during the Holocaust, joining the Yugoslav Partisans. Alongside a long career in aviation, which included managing Sarajevo Airport, he was famous for sharing his vast knowledge about the history and culture of the Sephardic Jews in the Balkans.

Bosnian media also described him as “the guardian of the Haggidah,” a famous medieval collection of Jewish regulations and traditions.

Jewish Community Sarajevo published a Facebook post announcing that Albahari, affectionately called “čika Moco” (Uncle Moco) passed away on Saturday October 22. Their obituary featured a quote by him that they felt reflected his relationship with the other human beings:

I especially desire that the doors of our community remain open to all fellow citizens of good will, regardless of their faith or nationality. I always welcome them with open arms, with a wish that senseless hatred turns into love among people. My credo is best expressed through a saying from Pirkei Avot (Chapters of the Fathers), a treatise from the Mishna: ‘Be of the disciples of Aaron, love peace and pursue peace, love your fellow men and bring them close to the Torah.’

In 2015, part of Albahari's life story was covered by the documentary “Saved by Language,” which was directed and produced by Susanna Zaraysky and Bryan Kirschen.

The film is described as the story of how “Moris used Ladino to communicate with an Italian colonel who helped him escape to a Partisan refuge after he ran away from the train taking Yugoslavian Jews to Nazi death camps. By speaking in Ladino to a Spanish-speaking US pilot in 1944 he was able to survive and lead the pilot, along with his American and British colleagues, to a safe Partisan airport.”

I am sad to share news that Moris Albahari, one of the last speakers of #Ladino in #Bosnia, passed away this weekend. En ganeden ke este, Moris. Thank you for letting Susanna Zaraysky and I into your life and sharing your story of survival with the world. https://t.co/jPtRXxNdey pic.twitter.com/eGj73LmOgQ

“Saved by Language” also features a number of Ladino songs, and is available for free on YouTube. 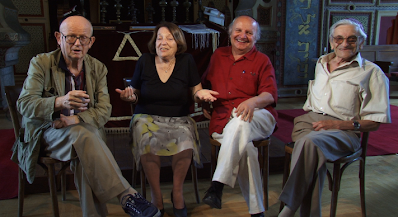 The last four speakers of Judeo-Spanish/Ladino “Jidyo” in Sarajevo (from left): David Kamhi, Ern Debevec, Jakob Finci, Moris Albahari. Photo from “Saved by Language” made in 2012, used with permission by Bryan Kirschen.

Before 1941, around 14,000 Jews lived in Bosnia and Herzegovina, and 12,000 were killed in the Holocaust. According to US State Department data, 2000 Bosnian Jews migrated to Israel or Western countries during the Yugoslav Wars of the 1990s. The latest census data indicates that, out of around 1000 Jews living in the country, 600–700 reside in Sarajevo.

In 1946, American journalist and writer Robert St. John (1902–2003) visited Yugoslavia and published the travelogue “The Silent People Speak” in 1948. One of the chapters deals with the horrifying experience of the “twelve thousand Jews who called Sarajevo home before the Nazis arrived. The twelve thousand were shopkeepers, factory owners, intellectuals, and workers. They were the kind of Jews you found in most any European city before the war… There are five hundred left.”

During his 1946 journey, St. John spoke to surviving members of the Abenaum family, noting that by that time they and other Sephardic Jews had lived in the Sarajevo for 450 years.

One of the holocaust survivors, an unnamed young woman who set in a dark corner during the whole interview, said she was 17 when she was captured by the Nazis and their local Ustaše collaborators. She escaped the concentration camp, joined the antifascist resistance, and after the war got a job as telephone operator. She highlighted the role of Ladino heritage during her plight.

I can tell you about those Nazi camps. I was there. They killed my father, my mother, and my grandmother. I was in one of those places for two years. Finally, when the mass killings began, I lost my mind. For many months I don't remember anything. They said, later, I was completely insane. But then my wits returned to me an I escaped. I located a Partisan band in the hills and I joined up. I served with the Partisans for the rest of the war.

The folk song in question is “Secretos.” A version has been included on a album of Sephardic songs published by Israeli musician and educator Claudia Nurit Henig in 1997 and available online via YouTube: