Once ignored, Facebook is now central to Fidesz's strategy 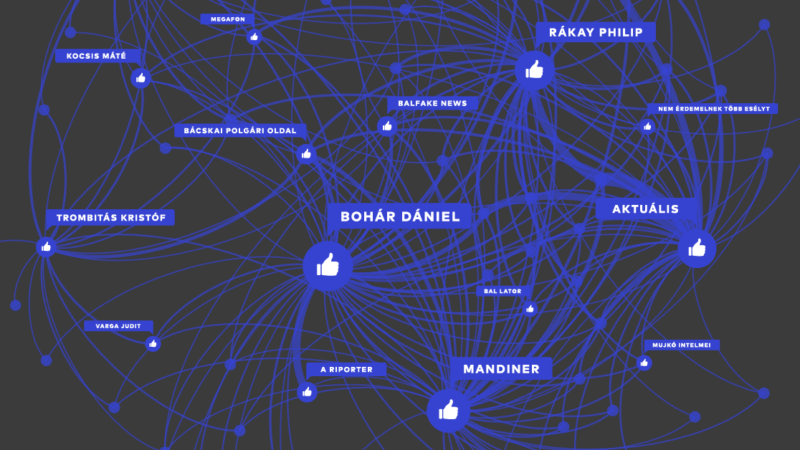 Image from Alto. Used with permission.

During the 2022 parliamentary elections in Hungary, Facebook played a critical role in reaching voters. One would be forgiven for thinking that the platform was essential for the opposition since the media environment favoured the ruling party, Fidesz. But the truth is that Fidesz relied heavily on Facebook during the campaign.

The Hungarian media environment is divided along political fault lines and operates in a market environment that is increasingly centralised.  Fidesz has always paid particular attention to the media, and Orbán has argued that the party’s past defeats were due to the unfriendliness of the press. For this reason, over the last ten years, the party applied various methods to gain control over Hungary's media landscape and spread its messages without limits.

By 2020, business interests close to the prime minister had control over large parts of the media. Fidesz allies also established new outlets (e.g. 888.hu, Ripost, Magyar Idok) to spread pro-government messages, and the party has been exercising political control over the public service media. In such a media environment, the opposition has a significant disadvantage when reaching potential voters. OSCE election observers found that the Hungarian media is sharply divided in an increasingly concentrated market. In the run-up to the 2022 parliamentary elections, biased and unbalanced news coverage characterised the public service media and many private media, mostly in favour of the ruling party. The ability of voters to make an informed choice was limited by this and the lack of debate between the main contenders.

Still, two years earlier, in the 2020 local elections, Fidesz was mildly defeated by the opposition. Fidesz still won in most districts, but the opposition also managed to win in several municipalities. The ruling party is said to have been caught by surprise by how well the opposition used social media during those elections. Fidesz was so focused on building a traditional media empire that it lagged its opponents when it came to reaching its constituency through social media. Subsequently, Fidesz started implementing centralisation on social media similar to the way they had centralised traditional media.

One of the first attempts involved the establishment of a new platform, HunDub, since Facebook was labelled a “biased, liberal platform” that censors right-wing voices. HunDub emerged as a response to the US elections and the de-platformization of Trump. The party was worried that the same might happen to their politicians during the 2022 election campaign. However, the conservative “safe space” for Fidesz supporters ceased to exist after six months. Hence, Fidesz’s communication team had to devise a plan that worked on Facebook, the most popular social media platform in Hungary.

By 2021, content commissioned by Fidesz was present on all the major social networking platforms, including TikTok and Instagram. This was not an organic process but a massively financed one. Megafon Center is the most visible platform for pro-Fidesz influencers. It is run by donations and, in 2021, managed to collect HUF 557 million (about USD 1.3 million), but, according to Facebook’s ad tracker, it spent HUF 1 billion on advertising. The network includes several well-known pro-government journalists who became more active on social media as part of the Megafon brand building, but we can also see new, less-known young voices.

But it is not only Megafon-related actors that are becoming more active on Facebook. As the Atlo team pointed out in its in-depth analysis, a whole Fidesz metaverse makes it possible to spread the otherwise inorganically spreading messages. The data visualisation below demonstrates how the smaller, pro-government Facebook pages are resharing the messages posted by prominent influencers to support the circulation of that content. The bigger dots are the initial content procedures, and the smaller ones rarely share anything original; their role is to reshare the actual messages. 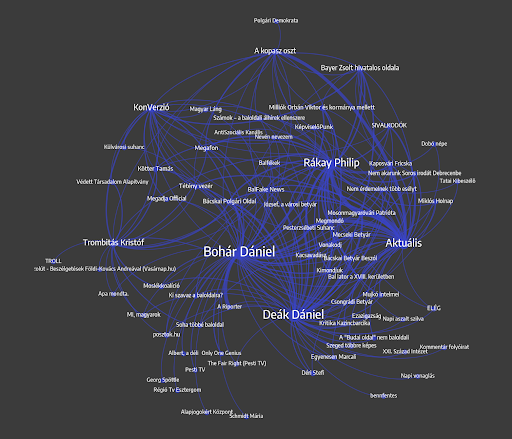 Disinformation spread through Facebook during the 2022 parliamentary elections campaign

The period leading up to the 2022 parliamentary elections was mainly dominated by the growing presence of Fidesz influencers on social media, as Political Capital, a leading Hungarian think tank, pointed out. For instance, the loudest influencer, Philip Rakay, shared various disinformation narratives on Facebook a few days before the elections, like “the Left is controlled and funded by a globalist international network aiming to displace Orbán.” Rakay’s video reached more than a million people thanks to the generous advertising placed on it by Megafon Center. Political analysts argued that the defeat of the opposition resulted from Fidesz’s success in making voters believe that the opposition is serving external interests and would bring Hungary to war. 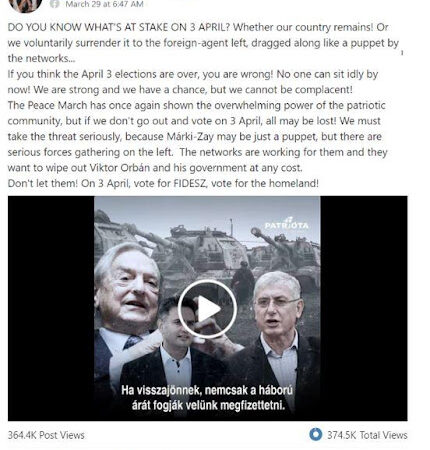 Fidesz spent a decade and a lot of money building up and sustaining its centralised media empire to remain in power. But recently, it has become clearer that maintaining this empire is not the most efficient way to spread its messages. Ninety percent of Hungarians use Facebook, and research shows that most of them get the news first from Facebook, and maybe in the evening from traditional TV news.

Several pro-government print newspapers are dying out in Hungary, one of the pro-government TV stations was shut down this summer, and more traditional media scaling back is about to happen. For Fidesz, social media represents a more efficient way of reaching more people for less money than through traditional media. Thus, rather than fighting and hating Facebook and Big Tech, Fidesz will likely concentrate most of its enormous communication resources on it to aid its political goals.