From ‘forerunner’ to ‘a puppy': How Mongolia got hooked on Russia's ‘Pivot to Asia’ 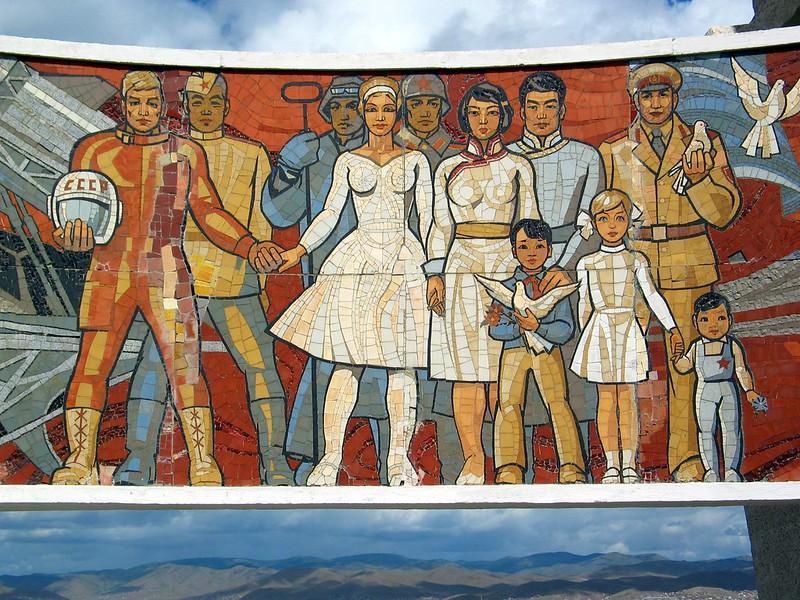 The second week of October 2022 was marked in Mongolia by the grand opening of the Chinggis Khaan Museum in the capital Ulaanbaatar, dedicated to the founder of the Mongol empire, the largest contiguous land empire in history. Around the same time, Mongolians marched in front of the Russian embassy to protest against its bloody invasion of Ukraine, calling for the expulsion of the Russian ambassador Iskander Azizov. The head of the Russian diplomatic mission, the longest serving ambassador to Mongolia with almost nine years of service, has been accused of interfering with internal affairs of the state and impeding the development of energy projects. In January 2022, the public expressed outrage at the Russian ambassador’s request to the chairman of the State Great Khural (parliament), to hand him the issues and directions to be discussed in the spring sessions of the parliament.

Indeed, a conspicuous disregard for the country’s sovereignty and diplomatic protocol, which often took the form of undisguised pressure, became the pattern of the Russian–Mongolian relations in recent years. Already, in 2011, Mongolia’s extreme dependence on energy imports from Russia, which amounted to 90 percent of overall petroleum products imports, was regarded as a major risk and vulnerability, especially since Russia made a habit of cutting oil and diesel exports, causing price hikes. With the launch of the Russian invasion of Ukraine in February 2022, when European countries try to withstand Putin’s policy of “energy blackmail” by diversifying energy sources or suppliers, Mongolia still remains extremely dependent on Russian imports in general and energy resources in particular. As of March 2022, Russian–Mongolian trade amounted to almost a third of Mongolia's total imports, more than any country in the Caucasus and Central Asia (except Armenia and Kazakhstan, both of which are the members of the Russia-led Eurasian Economic Union (EAEU)). 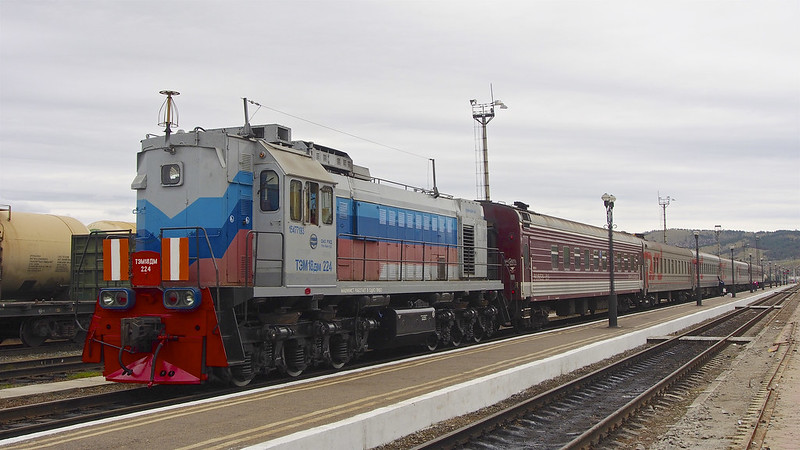 Once dubbed “an oasis of democracy” by the then US Secretary of State John Kerry, the landlocked nation of Mongolia stood alone between its two authoritarian neighbors — Russia and China. Despite scoring low in the fields of official corruption and inequality, Mongolia was rated by Freedom in the World as “Free,” with an overall score of 85 out of 100. However, Mongolia, whose economy grew at the impressive rate of 17 percent in 2011, found itself at the verge of default in 2016, struggling with debt and losing foreign investments. At the same time, almost a third of the population was below the poverty line, leaving the government in dire need of foreign investment and new economic opportunities.

It was around this time that both Russia and China intensified their ambitious economic and geostrategic projects: the so-called “Russia’s pivot to Asia,” (“поворот на Восток” or “Pivot to the East” in Russian), and China's Belt and Road initiative (BRI). However, unlike BRI, that was presented as a global infrastructure endeavor with Europe as one of its integral parts, Putin’s Pivot to the East was primarily driven by anti-Western sentiments  following the imposition of sanctions on Russia after it annexed Crimea in 2014. Traditionally, Mongolia tried to benefit from the competition between Russia and China, the only countries it borders. However, as Russia become more dependent on China after 2014, the possibilities of balance within the tripartite system rapidly diminished.

Mongolian politics have been dominated since 2017 by two influential figures, both of whom happened to be great admirers of the Russian president Vladimir Putin. In July 2017, Khaltmaagiin Battulga, a former world champion wrestler and the president of the Mongolian Judo Association, was elected president of Mongolia. The populist politician from Democratic Party (DP) and self-made millionaire ardently presented himself as a pro-Kremlin and, eventually,  anti-Beijing candidate, as well as a friend of the Russian president, with whom, as he often emphasizes, he shares a love for judo. The admiration for Putin seemed to be the core of his election campaign, as he officially used the campaign slogan “A president like Putin” (Путин шиг ерөнхийлөгч), and allegedly used in his campaign photoshopped images depicting him with Putin. The then prime minister and former army colonel Ukhnaagiin Khürelsükh, his primary political rival from the Mongolian People's Party (MPP) and the current president of Mongolia, was also an outspoken admirer of Putin, known for his Putin-style shirtless photoshoot with a rifle. 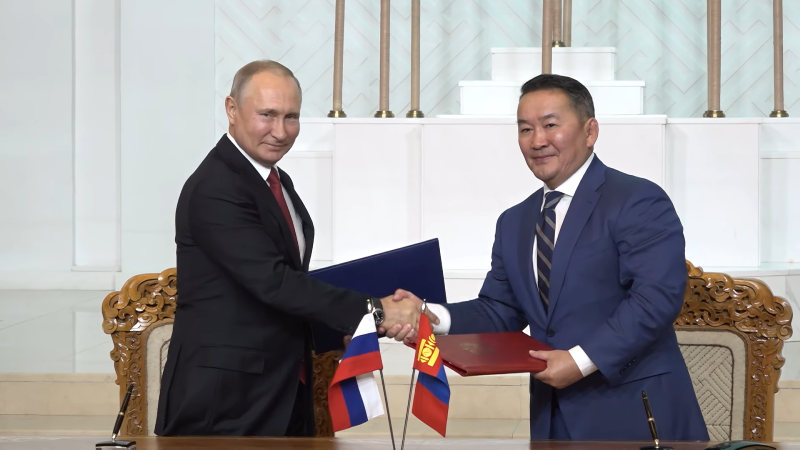 Mongolian president Khaltmaagiin Battulga (on the right) and Russian president Vladimir Putin (on the left), Ulaanbaatar, September 3, 2019. Screenshot from the Battulga Khaltmaa YouTube channel. Fair use.

Initially, a pro-Russian stance might have been a useful strategy to domestically employ anti-Chinese sentiments during elections, but soon they seemed to be overwhelmed by it themselves. President Battulga was criticized for preferring to participate in events attended by Putin at the cost of even missing out UN General Assembly sessions, while the ruling Mongolian People's Party intensified formal cooperation with Russia’s ruling party United Russia.

However, the years-long efforts to balance dependence on China by leaning towards Russia began to crumble with the Russian invasion of Ukraine. Facing imminent Western sanctions, Russia tried to employ existing alliances elsewhere to withstand global isolation and Mongolia's economic dependence came in handy. On February 28, just five days into the war, the Russian gas giant Gazprom hastily signed a contract for design and survey works of the Soyuz–Vostok gas pipeline project from Russia to China across Mongolia, the “flagship” project of the current Mongolian government, whose implementation, nevertheless, is likely to bring in a heavy cost burden for Mongolia and sizeable loan from Russia, leaving the country even more dependent on Russia.

The key to breaking Mongolia’s energy dependence on Russia and switching towards alternative energy resources seemed to lie in the Egiin Gol hydropower plant project, which was supposed to cover the bulk of the country’s electricity demand, but the project is currently blocked by Russia’s environmental concerns, despite the fact that China Export Import Bank was willing to sponsor the project. 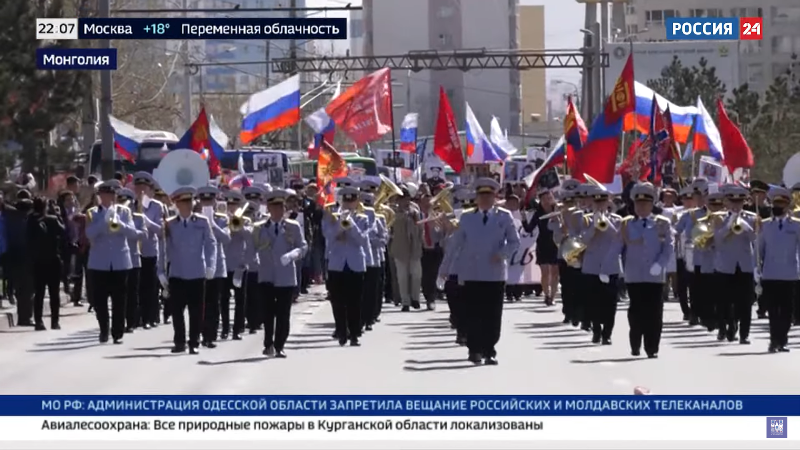 The Victory Day celebrations in Ulaanbaatar, Mongolia, May 9, 2022. Screenshot from the Русский Дом в Улан-Баторе Монголия YouTube channel. Fair use.

On the other hand, being heavily engaged with the Russian–Chinese anti-Western alliance brought Mongolia political liabilities, as it systematically abstained from any UN resolutions condemning the Russian invasion of Ukraine. Moreover, since the beginning of the invasion, several pro-Russian rallies have taken place in Mongolia, something unimaginable even in most post-Soviet Central Asian states. The mottos and symbols at the pro-Russian rallies in Mongolia, usually held in front of the Soviet general Georgy Zhukov monument in the capital Ulaanbaatar, do not differ much from pro-war rallies in Russia itself, varying from anti-Western and anti-Ukrainian statements (such as “US is a war criminal,” “No Fascism, No Zelensky!”) to those supporting Russia (“We are for Russia, against Nazism”).

At the same time, unlike most post-Soviet states, which were hesitant to organize the Victory Day parade, Mongolia not only let the Russian embassy and associated groups organize the so-called Immortal Regiment, but also sent troops to participate in the Victory Day military parade in Ulan-Ude, the capital of the Republic of Buryatia, Russia. In the meantime, numerous pro-Ukrainian and anti-war rallies in front of the Russian embassy in Ulaanbaatar were systematically impeded by the police or attacked by opponents, while some anti-war activists are facing up to three years in prison.

In the end, the country that used to be dubbed “an oasis of democracy” amidst its authoritarian and anti-Western neighbors is now more often called a “puppy state of Asia” (Азийн гөлөг улс) by Mongolians, reflecting the dire circumstances the country found itself in trying to flirt with its northern neighbor. This is far from the moniker “forerunner state of Asia” (Азийн хүлэг улс) Prime Minister Luvsannamsrain Oyun-Erdene bestows upon it in the title of his book.