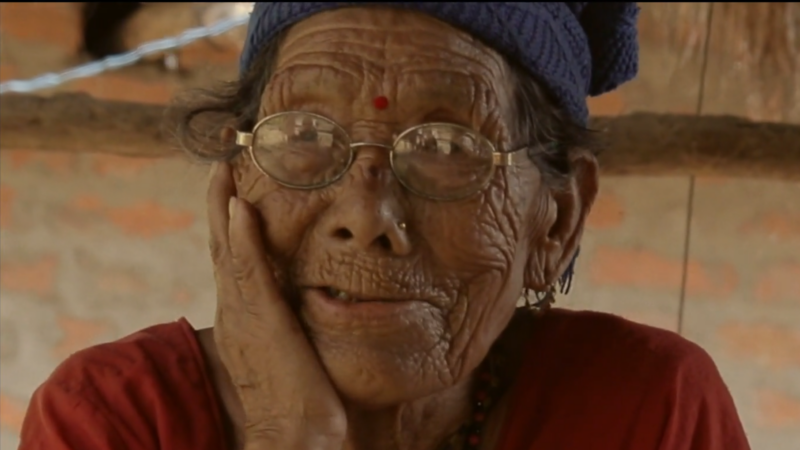 Gyani Maiya Sen Kusunda talking about the state of the Kusunda language. Screengrab from the documentary ‘Gyani Maiya.’ (CC BY-SA 4.0)

It all started with a single tweet. When I  saw a tweet about a new dictionary of the Kusunda language being published by Nepali language teacher and researcher Uday Raj Aaley, I immediately started googling for information about the language. The results were: an isolated language with only one fluent speaker – Gyani Maiya Sen Kusunda. This nudged me to get a copy of the dictionary.

As I laid my hands on the dictionary, it took me no time to read the introductory section about the Kusundas, the once semi-nomadic hunter-gatherer people living in western Nepal. According to the 2011 Census, there were only 273 Kusundas left, but field studies suggested the actual number to be 150. Currently, Kusundas live in the Kapilvastu, Arghakhanchi, Pyuthan, Rolpa, Dang, and Surkhet districts of Nepal.

When I spoke with Uday, the author of the dictionary, he said that Gyani Maiya's sister, Kamala Sen Khatri, also spoke the language fluently (Kusundas — a Nepali word — call themselves “Gi mihaq” or “Mihaq.”). I reacted with a sigh of relief at this information, as the reports, including one by the BBC, read that only one person could speak the language fluently.

As soon as I published the story about the dictionary on Global Voices, our translators jumped in so we could share the story in different languages. The story was widely read and when I met with Subhashish Panigrahi, then GV Odia Editor, at the GV Summit in 2017, he showed interest in doing a film about Gyani Maiya. After a series of discussions and much planning, it finally materialized in 2018 as he received a small grant from the National Geographic Society for this project.

Subhashish, Global Voices contributor Ananda KC and I travelled from Kathmandu and were joined near Kulmor by Uday who would be our kind host for the next two days. Meeting with Gyani Maiya at her house in Kulmor village in western Nepal’s Dang district was a dream come true for us. We spent two days interviewing and filming Uday’s conversations with her. As we sat behind the camera and the recorder, Uday would speak with Gyani Maiya and ask her questions in Nepali. She responded mostly in Kusunda with some Nepali, in which she was fluent.

She told us many secrets about Kusunda culture and tradition. Talking about Kusunda food habits, she said that they avoid touching and killing animals with hooves but love eating birds with claws. It means they never killed wild animals like deer but as the Kusundas have assimilated into the villages with other peoples such as the Magar and Tharu communities, they now kept goats and cows, as well.

They hunt the monitor lizard as their preferred catch, and also pheasants. Monitors are so special in their culture that this large lizard has become a part of the lead-up to the wedding ceremony. Along with clothes and money, the groom's family must present monitor eggs and meat to the would-be bride's family. If they can’t find a monitor lizard egg, the initial conversation between the interested parties cannot happen. And Gyani Maiya told us that no monitor lizard meat means “no marriage” at all.

Read More: A conversation with Gyani Maiya Sen, one of the last speakers of a dying Nepali language

Getting Gyani Maiya to speak in the Kusunda language in front of the camera and seeing her doing her daily chores on film to capture supplementary footage was not an easy task. It took us the whole day to film her. One of the things she kept repeating was that the young people were not interested in learning the language at all but she was ready to raise a generation of Kusundas speaking their mother tongue.

This is a difficult task. We learned from Gyani Maiya about the acculturation and assimilation of the Kusunda cultural identity. The Kusundas left their nomadic life behind to settle in villages and the young men and women started getting married outside their communities. As a small minority people, the dispersed members began to speak Nepali and other languages, and eventually, even the adults stopped speaking Kusunda. Over time, most adults could not speak Kusunda and so, their children also could not learn. 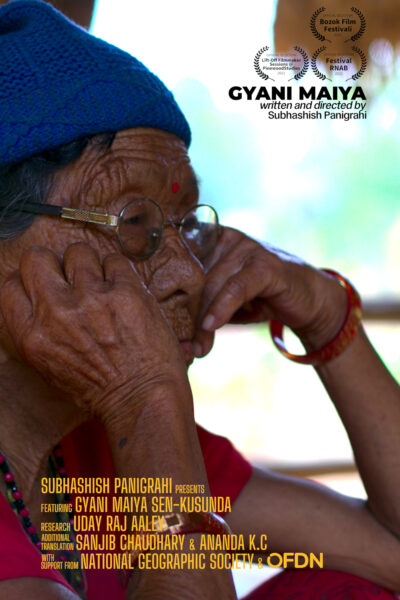 The 35-minute-long film “Gyani Maiya” was eventually released publicly in 2021 under a Creative Commons Attribution-ShareAlike 4.0 International license allowing use and derivatives and redistribution. A 21-minute-long DVD version is archived physically at the US Library of Congress. Eventually, the individual interviews will be available online for further research on Kusunda.

One and half years after the filming, it was sad to know that Gyani Maiya passed away at her home on January 25, 2020 at the age of 85. When she was still around, Uday, with the Nepal Language Commission’s support, started a Kusunda education pilot with a curriculum. Her younger sister Kamala, who most were not aware was a fluent Kusunda speaker as she was away in India, returned to Nepal and helped with the pilot design. They have continued teaching Kusundas to speak their long-forgotten mother tongue, joined by some non-Kusundas, as well. The young graduates now proudly speak Kusunda.

Although Gyani Maiya is no longer with us, her dream of teaching young Kusundas to speak their language is alive. The revitalization of the language has just begun.