Dr. Stella Nyanza has been one of the most outspoken voices in Uganda 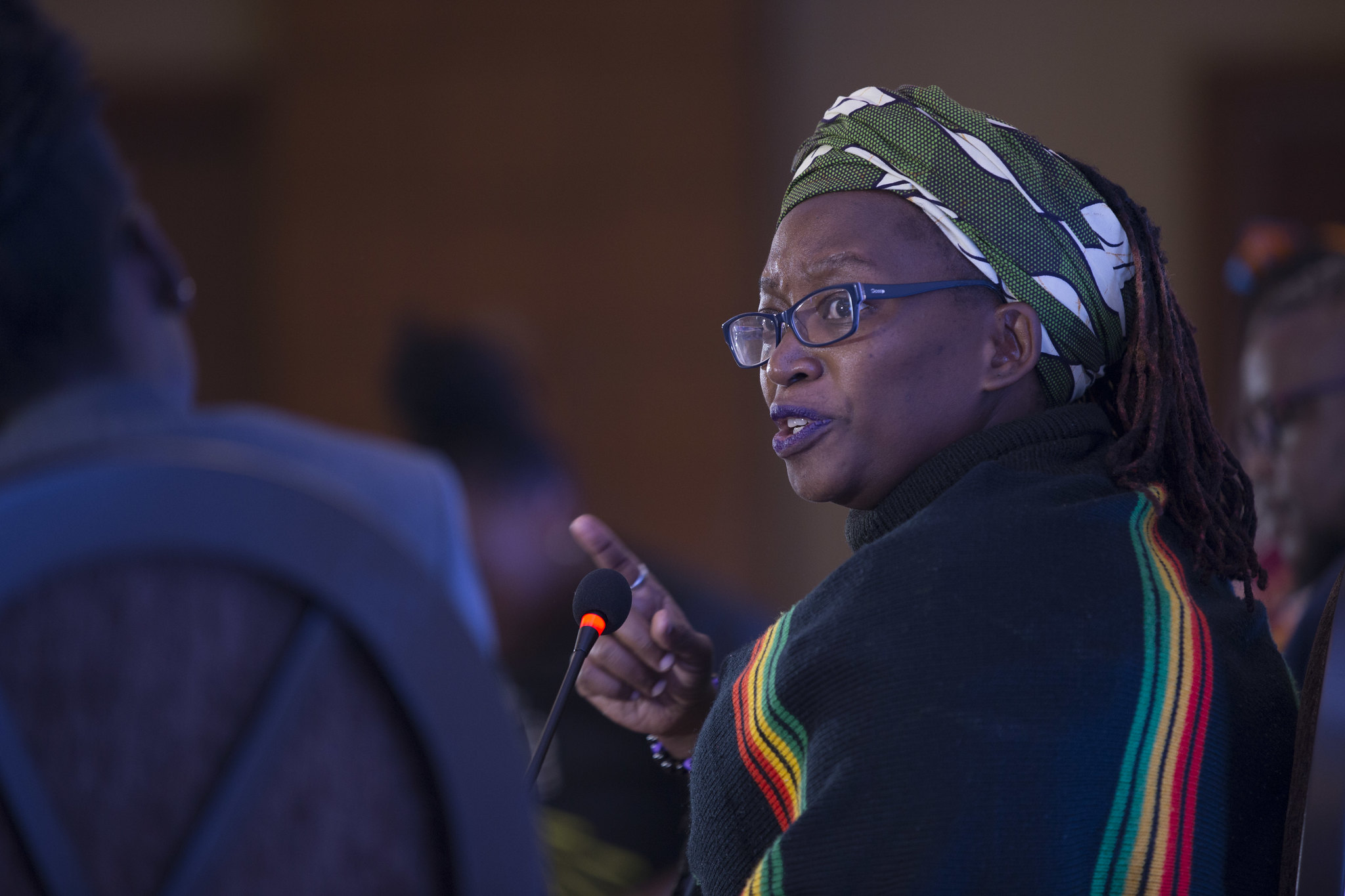 Dr. Stella Nyanzi at a Human Rights Convention in 2018 where she was a panelist. Photo Credit- Chapter Four Uganda. Attribution-NonCommercial-NoDerivs 2.0 Generic (CC BY-NC-ND 2.0)

This week, Ugandan President Yoweri Museveni signed into law the controversial Computer Misuse (Amendment) Bill a month after it was passed in parliament. The law, which many human rights defenders have criticized as a move to muzzle online dissent, prohibits Ugandans from writing, sending, or sharing information likely to ridicule, degrade, or demean another person, tribe, religion, or gender.

President Museveni signs into law the Controversial Computer Misuse (Amendment) Bill 2022, despite veiled appeal to him to reject it. The law criminalises sharing of unsolicited information. It also criminalises recording another person’s voice or video without their consent. pic.twitter.com/uIPIMae2k2

This comes hardly a week after his son General Muhoozi Kainerugaba sparked a diplomatic row on Twitter with its neighbour Kenya. However, it is Museveni’s most prominent critics and online dissidents, such as poet, medical anthropologist, and human rights activist Dr. Stella Nyanzi, and novelist and lawyer Kakwenza Rukirabashaija, who could be the most affected by the law.

Dr. Nyanzi is arguably one of Uganda’s most active and outspoken social media users with her over 300,000 Facebook fans.

Despite Dr. Nyanzi’s sexually explicit poetry being criticized by literary purists as not poetic enough, it has continued to garner her much popularity and a following beyond her country even as it continues to rattle President Museveni every time she pens a poem in protest against his leadership. Her provocative and explicit poem published on her Facebook page a day after Museveni's 74th birthday got her arrested and charged with “cyber harassment and offensive communication.” The poem, which sought to condemn Museveni's rule of 33 years, read in part:

“Yoweri, they say it was your birthday yesterday!
How morbidly grave a day!
I wish that Esiteri's cursed genitals had pushed out a monstrously greenish-bluish still-birth.
You should have died at birth, you dirty delinquent dictator…
You should have died in birth, Yoweri Kaguta Museveni.”

She was convicted to an 18-month jail term, the sentence was later revoked and she was released having spent over nine months in prison in 2019 for publishing that poem.

That same year, Dr. Nyanzi was arrested and charged with cyber harassment for insulting Museveni after she wrote and published a poem about the president's mother's vagina on her Facebook page. She served an 18-month sentence.

Previously, in 2017, she spent 33 days in the women’s maximum prison for her Facebook post which described Museveni as “a pair of buttocks.”

She has paid a heavy price for her outspoken poetry and her refusal to apologize, including the loss of her teaching job, incarceration, torture, a miscarriage, constant police harassment, and ultimately, her freedom and right to live in her country of birth.

Dr. Nyanzi's style of protest has been criticized by literary purists and feminist groups alike for its vulgarity.  When she was suspended from her teaching job at Makerere University in 2016, she protested the decision by stripping naked and chaining herself in her office.

One Tweeter Criminalized, Another Promoted

Dr. Nyanzi had been living in exile in Nairobi till January this year when she moved to Germany on a writers-in-exile program run by PEN Germany with her three children. She fled Uganda in February 2021 following political persecution by Museveni’s government. In September, she returned to Kenya for her one-month book tour of Nairobi, Kisumu, and Mombasa cities promoting her latest book “No Roses From My Mouth.”

Weeks after Dr. Nyanzi began her Kenyan tour in Nairobi, with book readings and the signing of her three poetry collections in September this year, Muhoozi’s Twitter storm containing threats of his military capture of Nairobi resulted in a diplomatic row between Kenya and Uganda.

Unlike Muhoozi’s tweets of Nairobi that drew the ire of angry Kenyans online, Dr. Nyanzi was welcomed by Kenyans both online and at the venues where she held book readings and signings.

“In Uganda, I am not respected as a poet or writer. I do not get invited to book readings where everyone wants an autograph. This sort of thing never happens in my country,” she explained as she apologized for her emotional outburst.

As she broke down in tears at the Cheche bookshop in Nairobi as the session moderator, Nanjala Nyabola, introduced her, she explained how overwhelmed she had become by the love and admiration that Kenyans had for her and her work.

In Kenya, the people say, “Wewe ni Mshairi wetu!” This translates from Kiswahili as “You are our poet!” In Uganda, the idiot in power imprisoned me for my poems. In Kenya, journalists acknowledge I’m a poet who uses words as weapons. I am the poet who fights with stinging words. pic.twitter.com/qOrKvPuk4d

Dr. Nyanzi’s past Facebook posts have seen her charged with cyber harassment and even jailed for up to eight months. Yet Muhoozi’s recent Twiplomatic scandal landed him a promotion from Lieutenant General to full general, the highest military ranking.

Now Uganda has criminalised the use of social media with the passing of a Computer Misuse (Amendment) Bill, 2022, which digital rights defenders have condemned for being regressive. So the irony in the duality of how Museveni decisively dealt with Muhoozi's Twitter use compared to Dr. Nyanzi's was not lost on many Ugandans.

While speaking to Kenyan media following the move to promote his son, President Museveni said;

This is because this mistake is one aspect where he has acted negatively as a Public officer.

There are, however, many other positive contributions the General has made and can still make.

This is a time-tested formula – discourage the negative and encourage the positive. 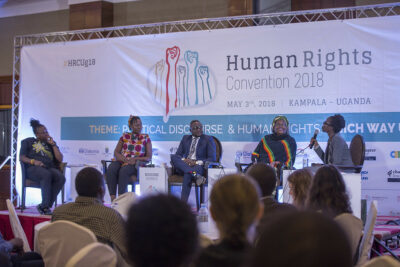 During a recent internet freedom forum in Zambia, various speakers criticized Uganda for its violations, deeming it a global example of the worst digital rights violator.

The country has a dismal digital rights track record, a 2020 report by Paradigm Initiative found.

Since 2017, internet shutdowns have been on the rise. In 2018, the country introduced a social media tax which it abandoned three years later. The country then introduced a new levy on internet data instead.

In 2021, ahead of the January elections, the government shut down Facebook. A week later, access to the entire internet was blocked for nearly a week while access to other social media platforms was restored after a month.

The government continues to wield the amended Computer Misuse Act of 2021 to arrest, detain, and even torture dissidents — many of them thespians like Dr. Nyanzi.

In February of this year, Ugandan author Kakwenza Rukirabashaija fled the country after spending nearly a month in jail. Kakwenza was charged with offensive communication for a series of tweets he had posted that were critical of President Museveni’s son, Gen. Muhoozi.

As the passed bill becomes law, Bwambale Asiimwe Micheal, a human rights lawyer at the Refugee Law Project-Center for Forced Migrants at Makerere University School of Law, sees this as a move by the state to further weaponize the law in order to silence dissent.

It is clear that the Ugandan state is weaponizing the law to pave the way for an even more repressive and coercive environment under the guise of ‘preventing misuse of online platforms.’ Laws like this must not be passed at the price of curtailing the public’s bedrock rights to free expression and association. Any such initiatives should be developed in close harmony with prevailing international human rights standards relating to freedom of expression, not used to merely entrench an abusive regime that now seems intent on consolidating its political power at all costs.

Still active on her Facebook page despite the new law, Dr. Nyanzi recently joined other Ugandan poets and poetry fans online for the unveiling of the poetry anthology titled “Ebyoya by'enswa: 60 poems for 60 years of Uganda's Independence,” which she co-edited together with Obed Obedgiu Kwokuboth Jalmeo.