Can Jamaica efficiently make the much-needed transition to renewable energy?

Energy diversification seems to be happening on a project basis, instead of on a national level 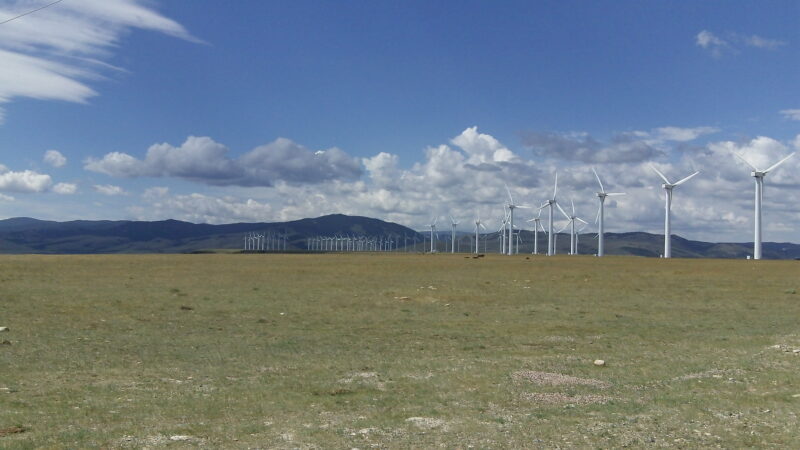 Image of a wind turbine farm by OLC Fiber on Flickr, CC BY 2.0.

This article was originally posted on the author's blog with the support of Climate Tracker’s Caribbean Energy Transition Journalism Fellowship, and an edited version is republished here with permission.

The majority of Jamaica’s energy has traditionally come from imported coal, petroleum and oil products. Combustible renewables and waste — used to form the cheaper, environmentally-friendly alternative, bio-gas — account for a meagre percentage of the country's energy supply, while hydro, solar and wind power represent less than 11 percent.

The fact that these products are imported impacts both the country’s gross domestic product (GDP) and the cost of electricity for consumers, many of whom are from low-income-earning households. According to Global Petrol Prices, as of March 2022, Jamaica's electricity charges are the sixth highest (out of 148 countries) worldwide.

In early October, some of the world’s most powerful oil producers agreed to impose massive output cuts, reducing production by two million barrels per day in order to shore up falling oil prices — a major setback as the world struggles to recover from the effects of the COVID-19 pandemic and the continued fallout from Russia’s invasion of Ukraine.

So how is “the land of wood and water” progressing with regard to switching from primarily non-renewable electricity, and what is being done to ensure Jamaica is on track with its ambitious target of increasing its renewable energy penetration (solar, wind and hydro) to 30 percent by 2030?

Despite having a tropical climate that enjoys the presence of northeast trade winds, Jamaica only has two wind farms, both underperforming, as they only provide electricity to a few surrounding communities. As of 2020, Jamaica’s use of renewables accounted for approximately 11 percent of its energy: 6.5 percent wind, 3.5 percent hydropower, and 1 percent solar power.

According to opposition spokesperson Phillip Paulwell, who is Jamaica's shadow minister on energy, the last public procurement for renewables was done in 2014, when the current renewable-related projects were established. While there has been progress in lowering greenhouse gas emissions, the footprint for renewables was only increased by 15 percent, way short of the government’s objective. He called on the government to speed up procurement measures and publish a plan for the future of renewables as, although a feasibility study was done in 2015 for a World Bank-funded hydropower project, there has been no clear progress since.

This is not to say that there have not been other worthwhile initiatives. In 2018, 80 percent of the island’s streetlights were switched to light-emitting diodes (LEDs), and the Petroleum Corporation of Jamaica (PCJ) announced an initiative to provide low-income, off-grid communities with solar PV kits. The project goal was to provide up to 2,000 households in these communities with renewably generated electricity, but since its piloting, the initiative has not been used optimally.

Meanwhile, Senator Sophia Frazer-Binns, who is the Shadow Minister on Land, Environment and Climate Change, says not enough is being done to advance water harvesting and capitalise on other resources, like solar. She believes there need to be more alternatives to increase electricity provision and facilitate access to solar power by all Jamaicans, adding that removal of taxes on the initiative would be a great incentive.

Young people have, in many ways, been leading the charge towards environmental awareness and energy sustainability in Jamaica. Eleanor Terrelonge, president of the non-governmental organisation (NGO) Jamaica Climate Change Youth Council (JCCYC), has suggested that more competition in the area of power supply would help reduce costs to customers. Jamaica’s electricity provider currently enjoys a monopoly. Terrelonge believes that unless the Jamaica Public Service Company (JPS) is forced to reduce costs, nothing will be done. She also finds that while Jamaica is attempting to diversify energy resources, it appears to be on an impromptu or project basis, instead of on a national level.

However, JPS, which is the only hydroelectricity plant operator in the country and the facilitator of two plants, has downplayed its role in Jamaica's efforts to realise its renewable energy goal of 30 percent by 2030. Its corporate communications officer, Audrey Williams, reinforced that this responsibility lies with the Government Procurement Entity (GPE), which takes the lead on the procurement of new electricity generation capacity. She added that the JPS will support the GPE's efforts and work with the Integrated Resource Plan (IRP), which is a road map to sustain and enable Jamaica’s electricity future.

In 2018, JPS constructed a 24MW hybrid energy storage facility, which has allowed the company to better manage the effects of fluctuating renewables and, over the past five years, has also invested USD 80 million in capital projects in order to manage costs and make the grid more resilient and efficient. Another challenge, however, is that some electric utilities have the benefit of government subsidies while others are not “fully integrated,” meaning they do not operate generation, as well as transmission and distribution services.

Williams said that if customers wish to switch to renewables, behaviour change is critical to make the savings secure. The concept of load shifting — transferring all energy-intensive activities to the daytime when energy is being generated — is one of the critical steps customers should take. Energy-efficient appliances and other methods of energy conservation can also make a big difference.

Another possibility is to encourage more users to generate their own electricity using renewable methods, attach it to the JPS grid and sell it.

Jamaica is undoubtedly progressing towards its goal of reduced greenhouse gas emissions and heavy oil energy consumption, but the pace is slower than many would like. The call is, therefore, for the government to implement more mitigation strategies and use more of our tropical renewable resources, and for consumers to be encouraged to be more energy efficient and switch to renewables.

Earlier this year, the Ministry of Science, Energy and Technology announced that it is engaged in the process of developing the second iteration of Jamaica's IRP, which outlines plans for electricity price reduction and is due to be completed by the end of 2022.

Fiona Daniels is a bilingual (English and Spanish) Jamaican journalist who has won several local creative writing awards and is passionate about volunteerism.