Judge says it is OK to be against the fish 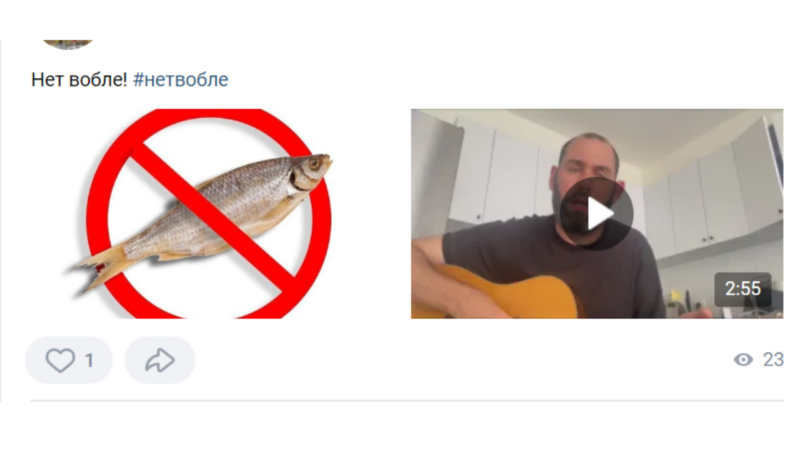 A judge in the Tyumen region in Siberia, Russia, has cleared 30-year-old Alisa Klimentieva of charges of “discriminating against the Russian army.”  She wrote with chalk on the pavement of a public square the words “No To W–” (“Нет В—Е” in Russian) and drew a peace sign on September 24, 2022. She was detained by the police that same day. In court, she explained to the judge that her sign didn't mean “No to War” (“Нет Войне”) but “No to Vobla” (which is a fish that shares the first and last letter, and the length with the word  “war” in Russian).  The sign, then, she said, was against the fish: “Нет ВОБЛЕ” not against the war (Нет ВОЙНЕ). She felt a strong dislike towards this type of fish, she claimed, and the judge Sergei Romanov supported her and dropped the charges. He also ruled that the blue chalk she used was to be returned to her.

This is a rare case of people being cleared of charges on the article for public actions aimed at discrediting the Russian army under article 20.3.3, which was added to the Administrative Code of Conduct in Russia after the Russian invasion of Ukraine. The article provides for a fine of up to RUB 100,000 (USD 1,612) for citizens, up to RUB 300,000 (USD 4,838) for officials, and up to RUB 1 million (USD 16,126) for legal entities.

At the same time, in March 2022, a law “on the public dissemination of knowingly false information about the use of the Russian Armed Forces in order to protect the interests of Russia and its citizens” (article 280.3 of the Criminal Code) was adopted. For its violation, citizens face a fine of up to RUB 5 million (USD 80,645)  or imprisonment for up to 10 years. If the spread of “false information” causes “serious consequences,” then the term of imprisonment will be from 10 to 15 years.

In the interview to Radio Liberty’s news outlet “Siberia. Realii” Alisa said that it was the first time she was detained, and she thought that her case was not typical, and the ruling was a matter of luck, people and circumstances.

Indeed, since the introduction of this article, there have been 4644 cases of “discrediting the Russian Army”, according to the independent news outlet MediaZona.

According to the human rights project OVD-Info, the total amount of fines  that people have had to pay for the violation of this article and for anti-war protests was RUB 257 million (over USD 4 million).  Sixteen thousand one hundred and fifty-one people were detained for protesting the war, and over 250 people charged with criminal offences.

An epidemic of cases allegedly “discrediting the army”

The details of cases where someone has been detained for “discrediting the army” are quite ridiculous.  There were people detained and charged for holding signs which said only “Peace to the world,” for singing a Soviet era song about the sun and peaceful sky, and even for holding an empty poster with nothing written on it.  The cases are numerous, and Global Voices will describe them in our follow-up reporting.

The particular case of Alisa Klimentieva seemed to inspire social media users, who perhaps have seen that sometimes the absurdity of the state’s actions could be downplayed by the absurdity of personal arguments, and resistance could continue.

Thus, even VKontakte or VK (a Russian social media platform that is closely connected to the state but is also one of the most popular ones in Russia) users started to use the fish as a meme, showing the absurdity of state repression.  A popular repost in VK is the video of a song by Semyon Slepakov, a popular comic artist from Russia who is now living in Israel. He posted a video dedicated to Alisa's case, and in the song he sings:

“In short, this vobla is where all the evil on the planet comes from. Families are falling apart, innocent children are suffering. And taking advantage of the fact that we have democracy in our country, let's all say together, sisters and brothers: no vobla, no vobla, no poisonous vobla”

The song has over 50,000 liked on YouTube, and VK's users are reposting it with such statements as “No to war, shit, no, no to vobla!”

Here are some of them. In order to protect the users, Global Voices is not posting users’ nicknames or photos.

The sign says “No to vobla!” and adds the same hashtag. 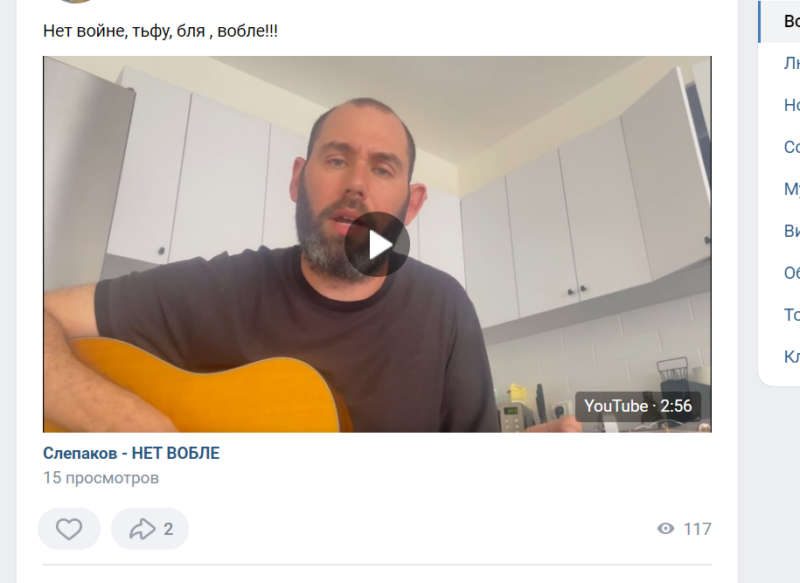 VKontakte users know they have to be careful. Independent media has written about the network's cooperation with the Russian secret services and the police.  There have been numerous cases of both fines for discrediting the army as well as criminal cases against VK's users. For example, a user in Moscow was detained in March for spreading fake news about the Russian Army (another new article of the Criminal code adopted in March 2022) and may be charged with up to 10 years in prison.

With this meme, however, the users are eager to express their opinion.  For example, local news outlets are also re-posting them. Here is a photo collage from a news outlet from Magnitogorsk a small city in the Urals (this is a collage of memes from other users). 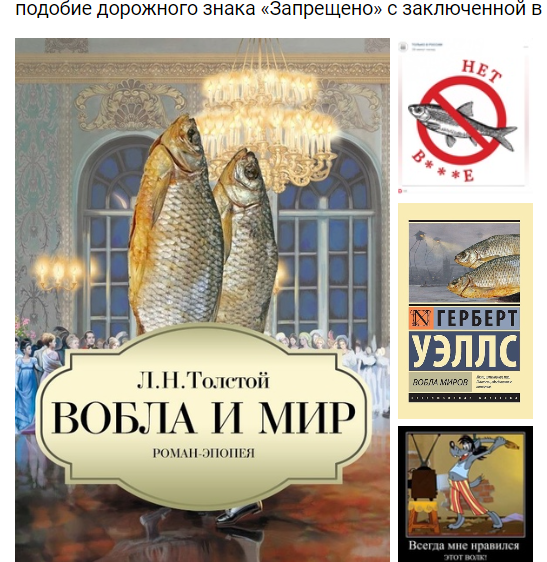 The picture shows the cover of Leo Tolstoy's “War and Peace,” but it says “Vobla and Peace”  There is also a cover of H.G. Wells's “The War of the Worlds,” but this one says “The Vobla of the Worlds.”

Finally, there is already a T-shirt on sale in VKontakte: 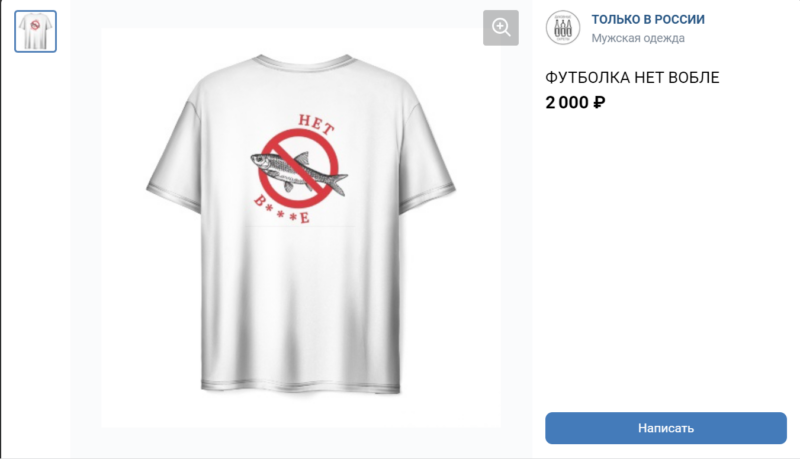 The language of allusions is not new to Russia. Kitchen talk and subtle metaphors that those brave enough to express dissenting opinions used in the USSR have a long and recent history. The trouble is, Russians have to revert to it yet again, and  it feels painful.