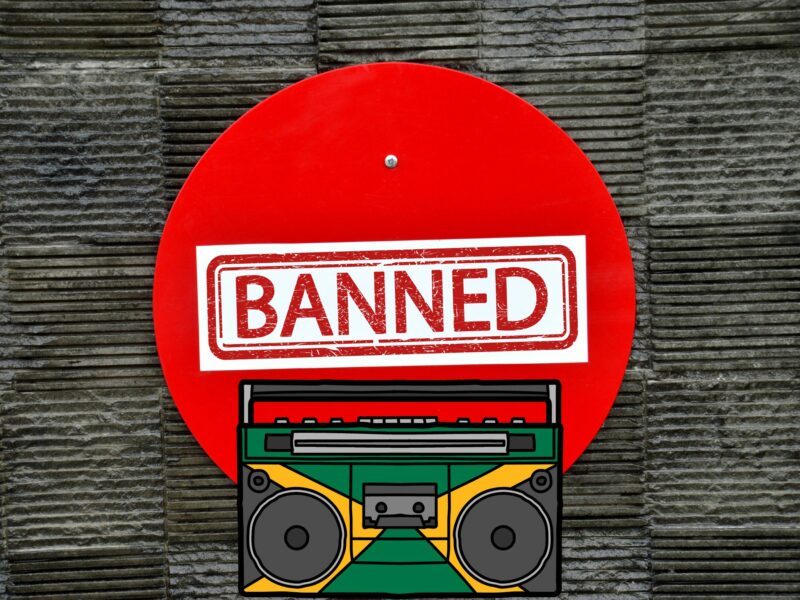 On October 11, the Broadcasting Commission of Jamaica issued a directive to all broadcast licensees aimed at “keeping [the] airwaves clean”:

The Broadcasting Commission has issued a directive to all broadcasters to immediately prevent the transmission of any recorded material on tv, radio, or cable that glorifies, promotes, or otherwise encourages illegal activities:

#BCJUpdate The Broadcasting Commission has issued a directive immediately banning the transmission of all content promoting illegal activities.

Founded in 1986, the Broadcasting Commission is mandated by Jamaica's Broadcasting and Radio Re-diffusion Act to monitor and regulate free-to-air television, radio, and cable services “to ensure their operation at appropriate levels in relation to technical, programming, and service standards. The announcement threw sections of the media, the entertainment industry, and the general public into confusion, though reactions were very mixed.

Against the backdrop of escalating gang activity, a rise in murders, and a pervasive atmosphere of violence in some Jamaican communities, many people welcomed the move, including Minister of Information Robert Morgan, who asserted that it was not designed to restrict freedom of speech:

The thing about radio is [once it is on], I’m not the only one who is hearing it. It is a public facility [that] is licensed by the government [and] is regulated by particular laws. So, it is not about fighting crime; it is about decency and standards.

Executive Director of the Broadcasting Commission Cordel Green appeared on several media platforms defending the directive. He suggested that broadcasters who oppose the ban should “step away,” and maintained that recording studios and artists will not be affected. Green added that “the gatekeepers are the commission's focus.” Even when the Broadcasting Commission fines a station found to be in breach of the regulations, and the station is directed to air an apology, “rarely, if at all, you hear a reference to the particular song or the artistes”:

#StarEntertainment: “This is not about entertainers. We can't tell an artiste what art to create. Artistes are informed by their own experiences whether they be dysfunctional or liberating. Some of them care about the society, some of them don't.”

Big up to the @BCJamaica for such a BOLD & TIMELY move.

Dancehall was intended for fun, fashion, creativity, expression. How did we get to promoting drug use, murder, scamming? I agree with the ban on dancehall lyrics promoting these things. Dancehall must go back to the 90s. Most dancehall artists today make music for depraved minds

The underlying question lingers: does Jamaican popular music really encourage and incite ordinary Jamaicans to commit crimes? A recent public opinion poll suggested that most Jamaicans believe there is some connection, with only 22 percent believing that there is little or no correlation between the music and criminal activity.

However, numerous questions surfaced on whether—and how—the directive was to be enforced. Would it flag specific artists or songs? Would it include older tunes, or only current music? Has the dancehall genre itself been singled out as a harmful influence on Jamaican youth and society? In criticising the vague wording of the directive, attorney Kenyatta Powell suggested that dancehall is indeed the scapegoat. He wondered whether songs that challenge the system would be considered illegal, since “most revolutionary activities, by their nature, would be defined as criminal when directed against the very systems they are trying to replace or to supplant.”

Powell further asserted that activities like scamming, which many popular songs reference in their lyrics, are “the material reality under which people live […] it has to do with oppression, it has to do with the logical and conscious decisions that people make for self preservation on a day-to-day basis.”

Cultural commentator Isis Semaj-Hall also asked some pertinent questions regarding the wording of the directive:

🙋🏾‍♀️Questions. What are examples of near-sounding words & who will be tasked with creating this list? Would jolly be banned for sounding like molly? By this logic is fun also banned? Would a song celebrating mud cloth be banned? I jest a bit but this seems likes moral policing, no? pic.twitter.com/vpuSYKb3oA

This is not the first time that the Jamaican government has held dancehall at least partially responsible for the country’s high crime rate. In April 2021, Prime Minister Andrew Holness repeated his previous and unequivocal criticism of the musical genre, saying:

That is not right, and though you have the protection of the constitution to sing about it, you also have a duty to the children who are listening to you to say, ‘Man, that is not right.'”

Attempts to “clean up” Jamaican music, and the ensuing controversies, are also nothing new. Back in 2009, the Broadcasting Commission issued a similar directive, banning the “transmission of any recording, live song or music which promotes or glorifies any offence such as murder, rape, mob violence and other offences such as arson.” This move was perceived as a response to the hit “Rampin Shop” by dancehall deejays Vybz Kartel and Spice, and other songs deemed lewd and explicit, rather than songs about violent crime. While the 2009 directive was strongly supported by churches and educators, the Broadcasting Commission denied at the time that it had a list of “banned songs.”

It is not everything that we call ‘culture’ will have the longevity to carry from generation to generation. Societies have died because culture degenerated into decadence. The State cannot just stand by and allow the culture to just degenerate. The State has to work in support of those people who are willing to see to the longevity of the culture.

Despite such public assertions, some doubt that the directive will reach the Broadcasting Commission’s desired audience. As one young social media commentator noted in a radio interview, “Streaming is where it’s at.” Most Jamaican youth do not listen to the radio or watch cable television; instead, they log into online platforms like YouTube and Spotify. In fact, several young music producers dismissed the directive as irrelevant, with one pointing out cynically:

No one from the younger generation voluntarily listens to the radio in 2022. So imo the move is more of a ‘look we’re doing something’ more than actually trying to do something. & as far as I can remember music has always been the ‘reason’ for everything in Jamaica.

And television current affairs programme “Beyond the Headlines” noted that what constitutes social commentary can be highly nuanced:

“Choppa” is Jamaican slang for a scammer (likely lottery scamming) as in “chop di line.”

Veteran dancehall deejay Bounty Killer, whose music has been banned in the past, added his two cents':

After all the debates, the finger pointing, the defiance, and the complaints, is the directive likely to make any difference to Jamaica’s crime rate? The lead researcher at a Jamaican think tank is waiting to see: