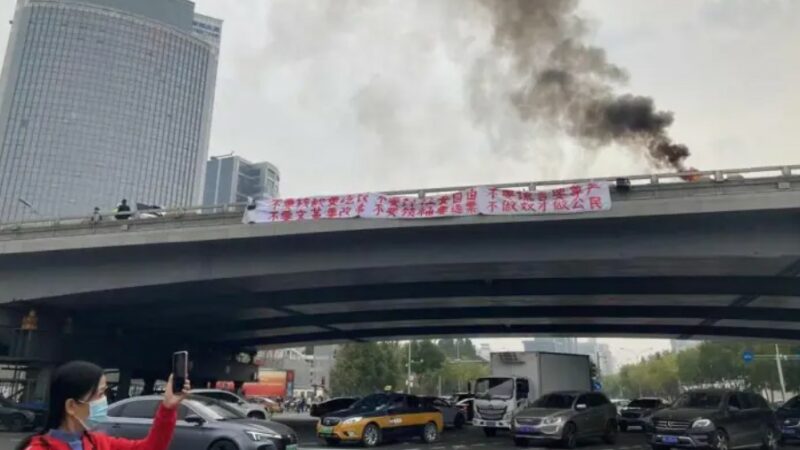 Viral photo of one of the protest banners in Sitong bridge, Beijiing circulating on various social media platforms. via HKFP.

Hong Kong media have remained largely muted on a rare protest in Beijing that called for the ousting of China’s leader Xi Jinping ahead of the historic 20th Communist Party congress. The meeting, a once-in-every-five-years event, is set to begin on Sunday and will likely see Xi secure an unprecedented third term.

On Thursday, reports emerged on the mainland that two banners had been draped across Sitong bridge — an overpass in the capital’s Haiding district. One of the banners, according to online images, called on people to go on strike to “oust the dictator, traitor Xi Jinping.”

Another banner meanwhile listed a range of grievances, including some against the country’s stringent COVID-19 restrictions. “We want food, not PCR tests. We want freedom, not lockdowns. We want respect, not lies. We want reform, not Cultural Revolution. We want a vote, not a leader. We want to be citizens, not slaves.”

International outlets such as Bloomberg, Reuters and the Wall Street Journal reported on the incident, while it appeared as the top story on the BBC News website. It was also covered by Taiwanese media and independent platforms such as Initium, though the protest was ignored by mainstream Hong Kong outlets.

Independent online outlet ReNews shared the news, whilst HK01 initially reported on the protest but later removed the article. It could still be found on Google cache and archival website WayBack Machine.

The banners were removed quickly on the same day but photos were already being widely shared by people online. Chinese authorities, however, were swift to take down social media posts related to the incident, including those with keywords such as #Haidian, #Sitong bridge, and even #Beijing. There was also police presence near the overpass afterwards.

The courageous man on Sitong bridge, Beijing was Peng Lifa. His online name was Peng Zaizhou. He was from the Tailia county of Heilongjiang. A researcher on the electron. Before the incident, he had posted the banner slogans after my tweets and on his own Twitter and researchgate accounts. But related messages had been deleted. Obviously, the police had entered his accounts. It is good to know his identity. At least he will not vanish without a trace.

Following the censorship, people used another hashtag, #I-Saw-It (#我看到了, to communicate on China’s Twitter-like Weibo platform. But those were also removed, with some reporting that their accounts were permanently blocked.

When searching for the #ISawIt hashtag on Weibo, the platform showed a message that reads “[A]ccording to relevant laws and regulations, the topic page cannot be displayed.”

Others meanwhile took to overseas social media platforms, including Twitter, to discuss the incident. Many were shocked by the man's courageous act. Activist Wang Dan, who was a student leader during the 1989 Tiananmen movement, was among those who praised Peng. Wang made three points in his YouTube commentary. First, the heroic act would have a demonstrative effect. Second, the desperate protest act indicated that Xi would face a ruling crisis in his third term. Third, the courageous man will become a new protest icon similar to the Tank man of the 1989 Tiananmen protests.

China's political stability is solid, because the country is developing very well in general, and the vast majority of people support the CPC’s leadership, hoping for stability and opposing upheaval. This is China's basic national conditions and public opinion.

It said it would safeguard national security by safeguarding “the south gate,” referring to Hong Kong being a critical spot in southern China