'People I photograph on the streets are my prophets' 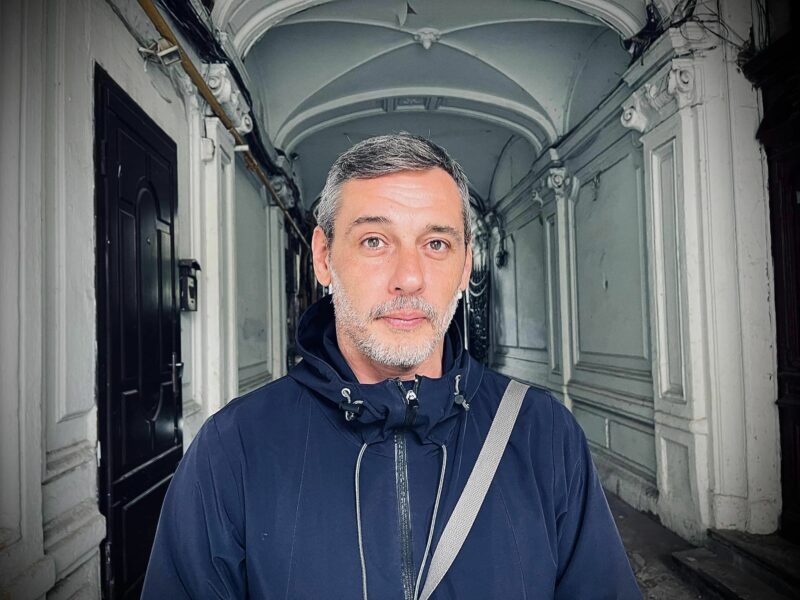 More than a city, Odesa is a myth that is perhaps best described through the lenses of analog photography. Global Voices met with Odesa-based photographer Aleksandr Yakimchuk to explore the 200-year-old city.

Yakimchuk lives in Odesa, a port located on the Black Sea and Ukraine’s third largest urban center. The city, established over two centuries ago, is famous for its rich architectural, literary and artistic history, and has just requested to be admitted to UNESCO's World Heritage List.

Global Voices paid Yakimchuk a visit on a rainy Sunday morning and chatted with him in Russian. In his small room located in the old part of the city in a communal apartment the walls are covered to the ceiling with photos, all black and white. Some are his, others are by fellow photographers from Odesa and beyond. In the tiny kitchen, a giant enlarger stands proudly among piles of negatives and books. Yakimchuk lives for photography and inside photography.

This is my new project, now that I can no longer take black-and-white photos. I take pictures of friends, but also of unknown people with a Polaroid. Before I do that, I ask them what they are thinking about at this very moment, and as they prepare their answer, their face changes. That’s when I press the button. When the photo emerges on the paper within a few minutes, I ask them to write a few words that echo their state of mind. Now I have about 200 portraits.

He then shifts through the pile as if playing with a pack of cards, and continues:

This is the picture of a woman I didn’t know I saw on a bench breastfeeding her child, here, near my house. When I saw her, I had already started my project, but it suddenly all made sense. She was like a Joconda on a bench, and I understood that the people I photograph are prophets. They tell me that there is hope, that we will win this war, that love and humanity will prevail.

Black-and-white photography is where I belong 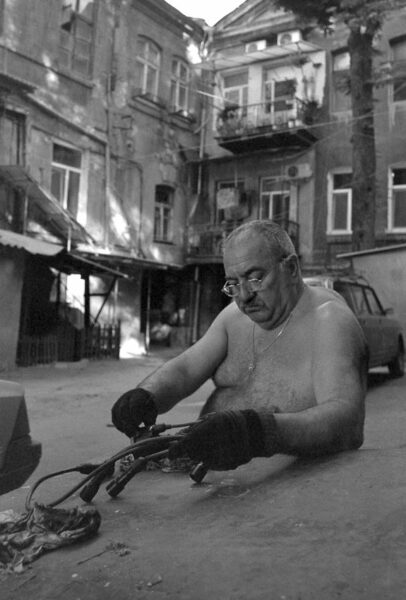 Photo of an Odesan yard by Aleksandr Yakimchuk, photo from his online album, used with permission.

But before Yakimchuk found this new Polaroid approach, he underwent an artistic crisis when he discovered that he could no longer take black-and-white pictures. As he explains, he originally came to photography rather slowly. On his initial journey, he was inspired by the Czech school of photography, starting with Jaromír Funke,  Josef Sudek, František Drtikol.

Gradually, he came to realize that Odesa, with its rich architectural heritage, its multicultural background, its endless changes in identity, should be shown in black and white, just like other European cities such as Paris, Vienna or Prague. As he turned 30, he returned to home-developed black-and-white photography, something he had picked up as a teenager. For a brief moment, he did play with digital photography, but soon understood that in his worldview photography is part of the material culture, something that must be touched and kept as a physical presence. As he takes out a heavy pile of negatives, he adds: “This is what I took in Odesa, it is about 30,000 photos. I need to be able to work on each piece, use what I have and work with it.”

After the year 2010, he worked solely with analog photography, developing negatives at home, and taking photos of Odesa, inspired by masters such as Robert Doisneau and Henri Cartier-Bresson.

I was looking for authenticity, because this is where you can create your paradise, as Doisneau once said. This is how I created my own Odesa: After two-three years, I discovered by analyzing my photos that I could jump into that world and dissolve myself in it; live in Odesa inside that beauty. My first photo exhibition in Odesa in 2014 was called “My beloved city — my conversation.”  After that I created a private photography school, and had more exhibitions, including in London and Istanbul, and even ran a gallery for a year, just before the war, because there are almost no spaces solely devoted to photography in Ukraine.

Most of his collection is displayed in albums on his Facebook account and shows the people, animals, streets and public spaces of Odesa as a source of constant inspiration, a living memory of the city: 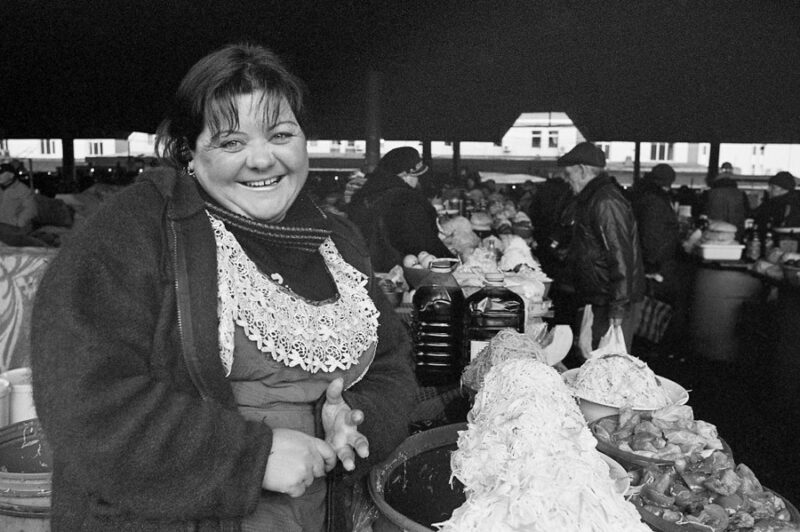 Photo of an Odesan market by Aleksandr Yakimchuk, photo from his online album, used with permission. 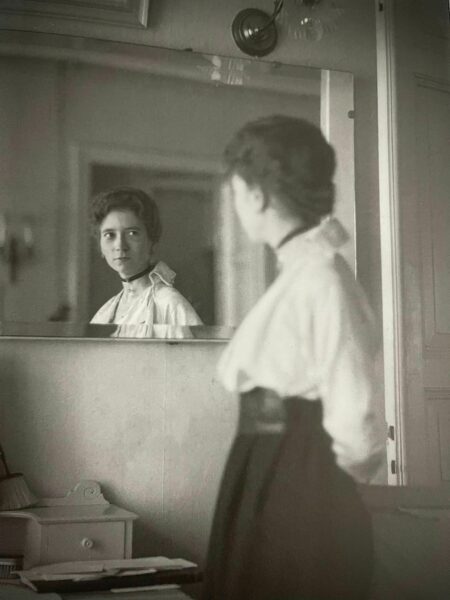 Photo from the Kugel's archive, taken by Filip Noubel and used with permission.

This passion for analog black-and-white photography and for Odesa has taken Yakimchuk on another historical project unique project: the publication of a collection of photographs of Odesa from 1913 to 1953 by Vincent Kugel, who moved there from his native Riga. His pictures offer a rare view of Odesans of all walks of life, and a changing portrait of the city as it changed governments and ideologies from Tsarist Russia, through the civil war, to Stalinist Soviet Union. Being an open port and a very international city from the start, Odesa maintains a special relationship with photography: it hosted the first photographic courses in the Empire as early as 1894.

Kugel's rediscovery is something that Yakimchuk remembers fondly and relates to personally as both are street photographers in the first place:

Those photos lay in a suitcase for 60 years, and I was given this incredible opportunity to work on that archive thanks to the grand-daughter of Kugel, and to publish them for the first time. This is a unique testimony about the history of Odesa, but also of black-and-white photography. 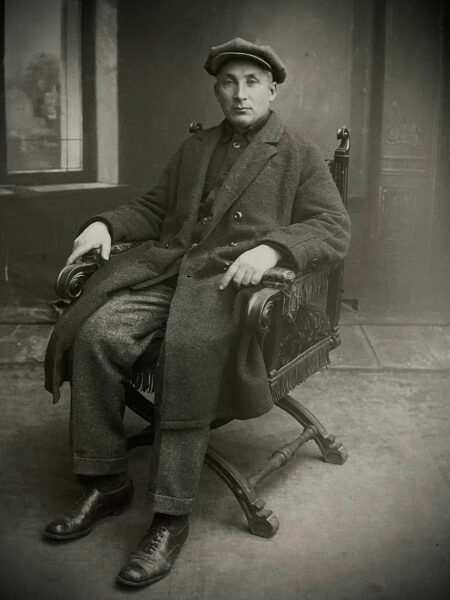 Photo from the Kugel's archive, taken by Filip Noubel and used with permission.

As Yakimchuk reflects on his work of over a decade, he is unsure about his next step: When Russia’s second invasion of Ukraine started on February 24, he took a few black-and-white photos, following his tradition, but soon discovered that he was emotionally overwhelmed, and could no longer continue to take pictures the way he did, so he stopped altogether. 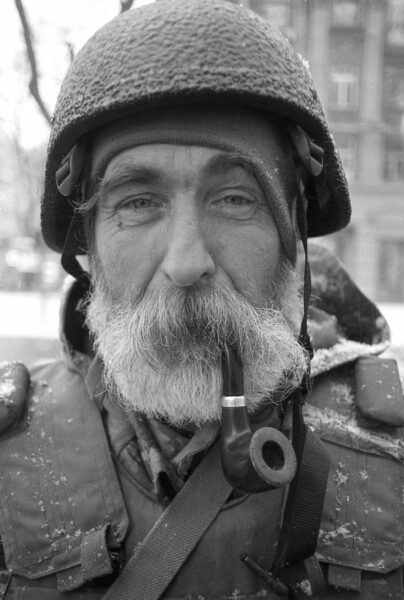 Photo by Aleksandr Yakimchuk of Odesa in the first weeks of Russia's invasion of 2022. Photo taken from his online album and used with permission.

Today, he concludes by saying:

I take black-and-white photos again of my beloved city? I am not sure. At this point, all I want is I want to take photos of nature. The war made me seek silence. There is silence that comes with our daily curfew, from 11PM to 5AM.  I know find joy in simple elements and feelings that have been sharpened by this war. I have in mind the pictures of kisses Doisneau took right after the Second World War.