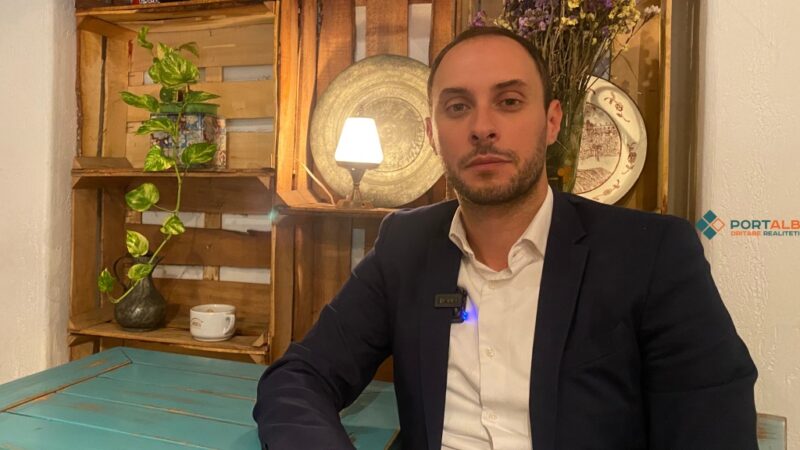 This interview is based on original coverage by Portalb.mk, Albanian-language news site from North Macedonia. An edited version is republished here under a content-sharing agreement between Global Voices and the Metamorphosis Foundation.

The countries of the Western Balkans have been tackling the challenge of the digitization of public services at different pace. Compared to other countries in the region, Albania is the leader in this process. Albania’s digital revolution that started in 2013 included only 14 electronic services then, while today its government provides 1,225 e-services. Translated into percentages, this shows that Albania has digitized 95 percent of public services, for which by 2022 there were 27 million requests by citizens.

This Portalb.mk interview with Aldo Merkoçi from Lëvizja Mjaft! (“Civil Movement Enough!”) addresses the process and challenges of digitalization in Albania. Mjaft! is the leading civil society organization from Albania promoting the Digital Agenda for the Western Balkans, including the use of online tools for accountability.

Portalb: How did the citizens of Albania experience the process of transformation of services from counter to electronic form?

Aldo Merkoçi (AM): The digitization process in Albania was relatively fast. The process officially started in 2011, but actually experienced a revolution around 2017. Somewhere around 2015, we had the first digital agenda strategy and it explained what the government wanted to do. The peculiarity of digitization in Albania is that it took place in parallel with the pandemic. Two things were combined: on the one hand, the will of the government to implement the digitization process, and, on the other hand, the urgent need arose due to the pandemic because citizens were forced to access the e-Albania portal, a portal that covers the entire digitalization process in Albania.

We should bear in mind that the case of Albania is a special case because of this combination of factors, and not that the citizens here are any more special than the rest. In this context, the pandemic was of great help for citizens to understand the process of digitization, to understand how this process helps people first, not only in the issue of reducing corruption in the state administration but as a result also for saving time and increasing efficiency.

In this context, it was well received by the citizens. Although parallel to that, there was some mistrust. The mistrust stemmed from two basic reasons. The first reason was the general mistrust that the citizens of the Western Balkans have towards their governments and politics in general. The second reason is that the digitization process requires certain additional knowledge that we had not yet learned because the citizens did not have the opportunities and mechanisms to adapt. Albanian citizens have begun to understand the importance and value of digital services, but we are still far from realizing the significance of virtual identity. A significant portion of the population still has difficulty logging in because of the knowledge surrounding the functioning of these electronic service applications.

Portalb: How much has the quality of services improved through digital transformation?

AM: This was the key to success, in fact, for most citizens, now we are talking about services that are everyday and common. Today it is very simple, for anyone who has the means, to access the e-Albania portal. This helped in the digital transformation process as a good number saw the benefits of this work.

The reason for this is that, until yesterday, when the registration was physical, the citizen had to leave work, they had to get a permit for that, had to go to the office, then had to wait in line, and even once you get to speak to a clerk, they would orally demand additional documents, alongside other requests from the employees in the state administration. Now, this whole process of taking leave from work, waiting in line, and having doubts about what documents need to be prepared in advance, has been digitized. Moreover moving the service online eliminated the “custom” attributed to the “Balkan mentality” which included leaving “tips” for state administration employees when a service is performed. And these “tips” were not insignificant amounts [like one would leave for a waiter], but amounted to small bribes.

These are the first steps that gained the trust of the citizens. In this context, it is evident that the service is better, faster, and more reliable, and there are no doubts about the system.

On the other hand, the fact remains that everyone can already get these services, and the big question remains: how safe are the citizens?

A great effort must be made to enable a section of the society that has no means to obtain this service. It remains an open debate, and we continue to insist that this should be studied further.

Portalb: To what extent was civil society involved in this process and how big was their real influence?

AM: I will refer back to the pandemic again because most of the digital structure was created in 2020 and 2021. In those two years, we may have been conditioned by the pandemic. What happened was that on the one hand the government urgently needed a digital infrastructure. On the other hand, the pandemic conditions also reduced the ability of civil society, to participate in the process of building this structure.

The combination of these things resulted in some unfortunate decisions. The government decision to disable physical access to counters in government institutions was met with disagreement from civil society. This happened because of the fact that infrastructure was built, with few consultations with and little consideration for the opinions all stakeholders.

Since 2019, through the ICEDA program, we at Mjaft! have been both monitoring the situation and giving specific advice to the institutions involved, mainly the National Agency for Information Security. Our recommendations also addressed all institutions, the way they are interconnected, until the moment the government issued a decision to close the counters.

To increase the participation of civil society in the process of digital transformation and implementation of the Digital Agenda, during the last three years we invested much not only in increasing our own knowledge, but also gathered knowledge and information from our partners in the field. We established a network composed of investigative journalists and local organizations that work in other cities, because these issues don't affect only the capital Tirana. The input from this pioneering network enabled us to see the dynamics more clearly. It was important for us to identify the problems and then convey the needs of the citizens to competent institutions.

Portalb: What is the biggest current challenge in the digitization process that Albanian citizens are facing?

AM: There are two main things. First of all, we need to make sure that all Albanian citizens have the opportunity to access it, and when we talk about this, we are not only talking about access to the internet, but about access to be able to get this service. The second has to do with security because the more services we provide to citizens or business profiles, the better. But parallel to this, as the number of services increases, as it is today, where we have more than 1,200 services, the moment your virtual profile as a citizen is hacked by someone else, then you are much more vulnerable than yesterday.

As the last case showed, we had a cyber-attack from Iran, and one thing we learned is that your security depends on how dangerous your enemy is. In this case, we did not understand the case of a big enemy like Iran, this was a message to the whole region that our defense system must be better and we must unite our defense system when it comes to cyber security.