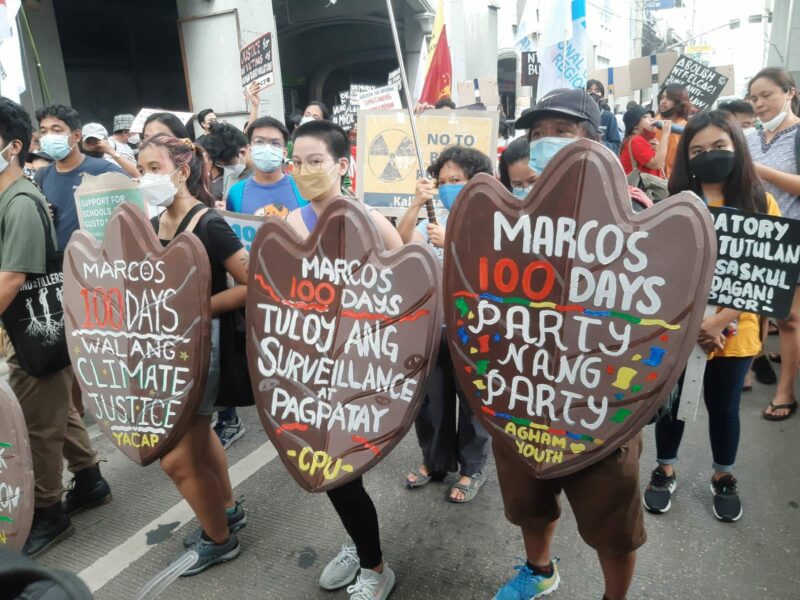 Activists call out President Ferdinand Marcos Jr. for his inaction on climate justice, intensified surveillance, human rights abuses, and his penchant for attending parties. Photo from Altermidya, used with permission

They criticized the government's proposed 2023 budget, which reduced funding for several social service programs and allocated more money to Defense agencies and foreign debt payments. They accused the new president of failing to prioritize urgent concerns such as rising inflation, the food crisis, and worsening unemployment.

Human rights groups also decried the “shrinking civic space for freedom of expression” as they urged the government to reverse the repressive policies of former President Rodrigo Duterte, who was in power from 2016 until June 2022. The Movement Against Tyranny (MAT) summed up the decline of human rights under the new government:

We are disturbed by the shrinking civic space for freedom of expression. Over the past two weeks, we saw the cold-blooded murder of a radio broadcaster, the signing into law of the mandatory SIM card registration which could become a tool for mass surveillance, the brief detention of two labor advocates over trumped up charges, and now the court rejection of the appeal by Ressa and Santos Jr. over their cyber libel conviction.

MAT is referring to the murder of two journalists under the Marcos Jr. government. The National Union of Journalists of the Philippines has documented 17 press freedom violations since July.

It is not just by killing that journalists are being forced into silence, as was the case with the murder of Percival “Percy Lapid” Mabasa last October 3. pic.twitter.com/jVjy4Jzi2W

The group added: “We note that Ferdinand Marcos Jr. vowed to protect journalists and we challenge this administration to denounce media killings, and translate his promise into concrete actions.”

Ressa said her team will appeal the decision in the Supreme Court. She added:

The ongoing campaign of harassment and intimidation against me and Rappler continues, and the Philippines legal system is not doing enough to stop it. I am disappointed by today’s ruling but sadly not surprised.

She also highlighted the questionable aspects of the case filed against her.

The question: are we living in the Matrix or is there rule of law? This is a story I didn't write, edit, or supervise published at a time when the law we supposedly violated didn't even exist. Such acrobatics to get us to this point, but we will #HoldTheLine https://t.co/IlI9GQbAqj

Finally, the MAT statement also discussed how the first law signed by Marcos Jr., the Mandatory SIM Card Registration Act, can be misused to enable mass surveillance and violate the privacy rights of citizens. In a Twitter thread, the Computer Professionals’ Union explains how the new law can undermine civil liberties:

The CPU condemns the signing of the SIM Registration Act into law by Pres Bongbong Marcos. Amid worsening crises and the culture of impunity in our nation, he prioritizes legislation that has been proven ineffective in addressing crime and further endangers people’s information. pic.twitter.com/zaNpIDqlE0

Reflecting on his first 100 days, Marcos Jr. said he succeeded in bringing experts to turn around the economy and make the government “functional” again. His Secretary of Justice also assured the United Nations Human Rights Council that the government is committed to promoting human rights and reforming the justice system. 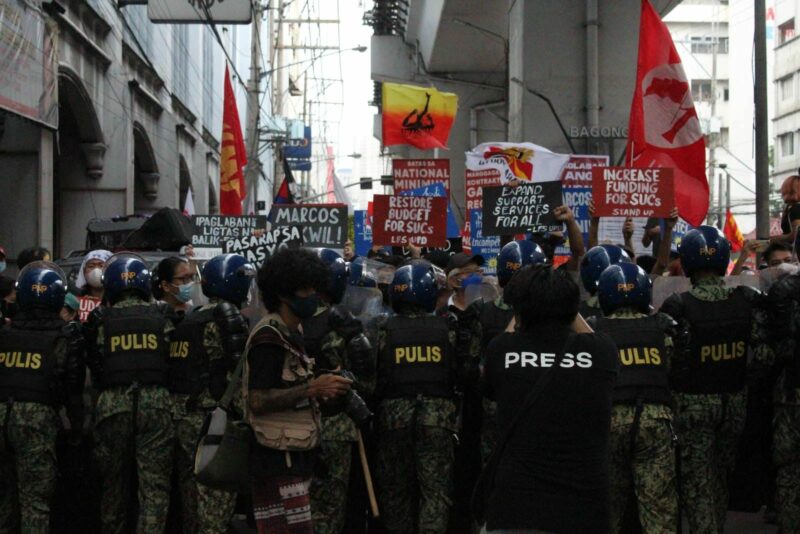 Police blocked protesters from marching near the presidential palace in Manila. Photo from Altermidya, used with permission