‘When the porridge is hot, one eats it on the side': Haiti's current protests, explained on Twitter 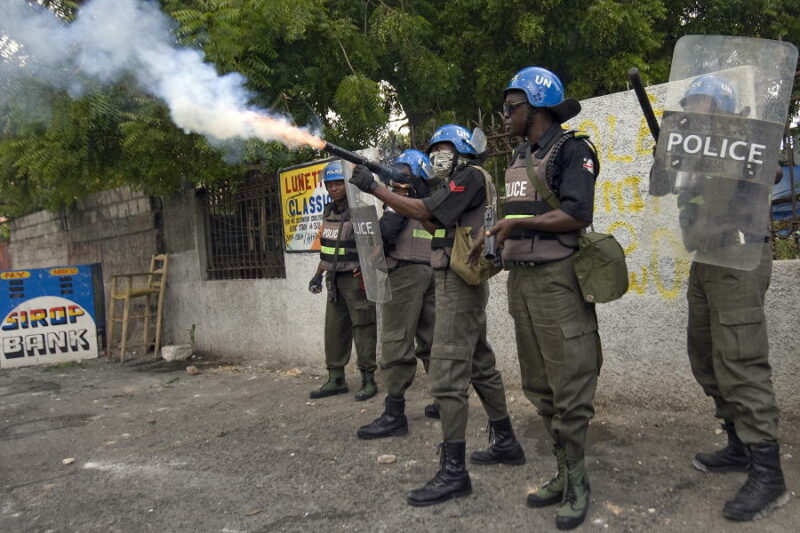 What's happening in Haiti? It depends on what you read. If mainstream media is the primary source of your news, you would have learned that the Haitian government, led by Prime Minister Ariel Henry and the Haitian Tèt Kale Party (PHTK), has officially requested foreign military intervention because of gang activity, widespread demonstrations following a fuel hike, and dwindling access to basic necessities.

The official request by #Haiti’s current rulers (it would be a stretch to call them a government) for an international peacekeeping force to be deployed in the country. pic.twitter.com/D3rG8WwEgr

Henry and his co-signatories have said they are worried about “the risk of a major humanitarian crisis” in the country, and an “asphyxiation of the national economy,” a concern that has been echoed by the United Nations, the international body whose “peacekeeping” presence in the country nearly 12 years ago was responsible for a cholera epidemic as well as human rights atrocities. UN troops only fully evacuated the Caribbean nation five years ago.

There is no disputing certain realities. Following Henry's September 11 announcement that the government would be putting an end to the fuel subsidy, the cost of gas went up. Terminal Varreux, a key fuel entry point, has been blockaded by gangs which, by controlling the energy supply, gives them power to regulate so much more. Transportation services have ground to a halt, and certain key public services such as health care have been unable to function. Cholera is reportedly seeing a resurgence, and there have been regular demonstrations.

However, the lens through which the Haitian narrative is being seen varies significantly between certain mainstream media coverage and social media. On Twitter, in particular, discussions have been taking on a very different tenor, the overriding context of which is that Haitians have had enough of the foreign occupation that is the root cause of its crises:

This is certainly not about “security” or “stability” on the part of Haiti’s de-facto government. It’s a way of attempting to put down the popular uprising demanding that the “government” leave the offices they’ve usurped. https://t.co/NjtNjCCOwq

The US is the main driver behind Haiti's problems today. Ever since it first invaded in 1915, it has been destablizing the country non-stop. The US reinvaded in 2004, along with Canada and France and have been driving Haiti into the ground for the past 18 years. Haiti is occupied

While some made the connection between the ongoing unrest and European — and later, American — colonisation, others were more concerned about the current occupiers:

The same groups that stripped Haiti's sovereignty away, will continue to work to make it a permanent condition.

The US, Canada, France, Core Group, OAS, USAID, UNSC – THESE ARE THE TRUE GANGS OF HAITI

The Core Group comprises the deputy special representative of the secretary general of the United Nations, the ambassadors of Germany, Brazil, Canada, France, and the US, and representatives of Spain, the Organization of American States and the European Union.

The evolution & role of gangs in #Haiti is clear in our timeline. First they worked with police to serve as enforcers of the US-installed client PHTK regimes of Martelly/Moise. Today these same gangs serve as the main justification for yet another foreign military intervention.

Massive protest against US-backed regime in Ti Gwav, #Haiti this morning. This marks 7 weeks of recent cycle of non-stop protests against foreign interference, IMF imposed austerity and calls for a govt of national unity to organize free and fair elections. pic.twitter.com/uVReLoAKmD

7 weeks of nonstop protests against western neocolonialism in Haiti gets less US media coverage than 5 people protesting food shortages in Cuba. Freedom of the press in the US means the media is free to make shit up about Official Enemies and ignore actual liberation movements. https://t.co/qOLCRPQVsb

There is no doubt in Haitians’ minds that the Henry administration is implicitly supported by the United States. One Twitter user even went so far as to call the prime minister a traitor; another, a puppet.

Ariel Henry, illegal defacto PM of #Haiti put there by US/Canada/France/UN/Core group with no official mandate & numerous massacres as results of his love fest with gangs now has, with his ministers, asked his masters for foreign troops to come to Haiti to save us?

This is not to say that there is any one simple solution. Twitter user Michael Deibert, who on October 8 posted a thread in which he garnered several Haitian friends’ views regarding the impending deployment of foreign troops to the country — “from relatively well-off bourgeois to people who have had the flee the violence of the baz in the quartiers populaires” — noted that “there are a range of opinions about the possibility.”

Meanwhile, even as the United States authorised its direct-hire personnel and their families to leave Haiti amidst the unrest, Secretary of State Anthony Blinken has been pledging his country's support for returning “stability” to Haiti, claiming, “International support is crucial to secure a more stable, democratic, and prosperous future for Haiti”:

I met with Foreign Minister @JeanVGeneus of Haiti to reaffirm the United States’ unwavering support for the Haitian people at this challenging time. We remain committed to helping Haiti restore security and democratic order so that all Haitians can have a brighter future. pic.twitter.com/bPoOg6rUgN

His efforts are being countered by a few senators and members of Congress who have petitioned President Joe Biden to reconsider his administration's approach:

Citing “decades of US meddling in Haiti’s internal affairs,” 4 Senators and 9 House members write to President Biden suggesting steps the US should take to change course and support a Haitian-led path forward. https://t.co/Uf6isDmhRl pic.twitter.com/U6WGGCH4KX

It was a call that was echoed by several members of the Haitian diaspora, as well as religious and human rights advocates. Notably, Dan Foote, the US special envoy for Haiti, last year resigned over what he called an “inhumane, counterproductive decision to deport thousands of Haitian refugees” from the US-Mexico border. He maintains that US policy towards Haiti is “deeply flawed”:

What will this force do? What's the goal? Do Haitians want it? Who will it work with as #Haiti‘s government?
If it's @drarielhenry, it'll be fighting the gangs AND the Haitian people.
The Hubris of he US/internationals created this calamity. Everything FAILS with DeFakto. https://t.co/rb2EfZrWQb

Today in Trou-du-Nord in northeast, #Haiti. There's no stopping the Haitian people. This fight is not only against Ariel Henry, who is just another disposable puppet, but the whole foreign-imposed neo-colonial system. pic.twitter.com/vfp7YN9wQW

Haitian people -“No we didn’t. The 🇺🇸-backed criminal regime is begging its racist master to rescue them & place Black Haiti under another 🇺🇸🇺🇳 occupation, which was the plan all along. Btw, how weird cholera is backed now?” 🤔 pic.twitter.com/6lW5PvFM7h

I challenge anyone to make a case for a Intl. military intervention in Haiti from a policy perspective. Tell me how this will help solve the problem of gang violence and crisis in Haiti. Not only it wouldn’t solve the problem but it would be an escalation of the crisis.

Deportations to #Haiti should have stopped over a year ago. Haiti doesn't need international armed forces. Haitians need to be allowed to follow their constitution to secure the country and transition to elections. Henry and PHTK must not remain in power. This will escalate.

Foote went head-to-head with US Secretary of State Blinken, who spoke about human rights in the context of a Russia-related tweet:

Human rights ARE universal, Tony.
Except in #Haiti.
We've been spoon-feeding you & POTUS the only path out of this mess for over a year.
Unanimous, imposed governments never work.
I know – I helped jam one in Afghanistan's ear.
Do the right thing – let Haitians decide w/o DeFakto https://t.co/vyEK7zRxMs

In a similar vein, Crystal Haynes wondered why other members of the Caribbean Community (CARICOM) of which Haiti is a part, have not acted as advocates on its behalf:

Haiti 🇭🇹 has been a full CARICOM member state for 20 years.

Where is @CARICOMorg on the deteriorating situation in its member country? https://t.co/vlbOpcUJAI

In a LinkedIn article that Johnny Celestin shared on Twitter, he suggested, “First, Haitians must acknowledge that Haiti’s problems are for Haitians to solve.” He also noted that the Core Group has “no credibility” in Haiti. A better option, he thought, would to be work more closely with CARICOM, “especially with Jamaica, [which has] a long history of dealing with gangs in their own country”:

To answer the question of what to do, one should consider the Haitian proverb that says ‘Lè labouyi cho, ou manje-l a rebò.’ When the porridge is hot, one eats it on the side [meaning] when faced with a complex problem, the best approach is to break it down into smaller pieces. In Haiti's complex puzzle, the smallest piece is to […] resolve the insecurity crisis and lay the foundation for a more fair society. […]

The first phase is to mobilize the country’s human and financial human resources. The second is to strengthen the public finances and other key institutions such as the judicial branch and the electoral council. The third is to consolidate its gains to move toward a national dialogue and elections.

As Haiti braces itself for more potential violence, it continues to grapple with the fact that the power of self-determination, which is what every country wants, is what its own society has been repeatedly denied.