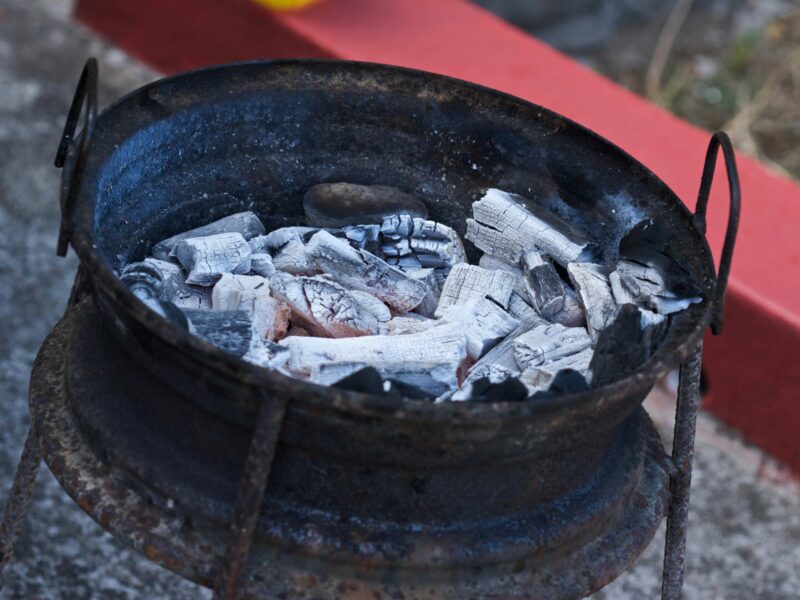 Image of a coal pot via Canva Pro.

It's been a series of snafus for Trinidad and Tobago government officials on public speaking platforms over the past week. First, Prime Minister Keith Rowley, speaking at a post-Budget press conference on September 26, offended public sector workers by saying they were not ready for a “major work-from-home policy,” because it “requires certain technical infrastructure and a certain level of discipline.”

This is despite the fact that the 2020 election manifesto of the People's National Movement (PNM), the party currently in office, cited work-from-home policies and resulting reduced traffic among the reasons they should be elected. Moreover, the country's 2023 Budget includes a fuel price hike, to which one Facebook user, Ahmed Nicholls, responded:

[The prime minister] is showing no regard to what the average citizen faces, the amount of time we spend in traffic, the amount of money we spend in fuel – which is going to increase because of the removal of the [fuel] subsidy – and not only is it insensitive, it really shows that politicians just don't care about the lives of an average citizen.

Rowley's comment was soon followed by a statement from Minister of Sport and Community Development Shamfa Cudjoe. At the opening of a community centre on September 28, she talked about the importance of making sacrifices in the present so that younger generations will benefit: “Everybody wants everything for nothing. Everybody wants everything but [is] willing to give up nothing.”

The Budget itself has prompted protests. It is being interpreted by at least one business chamber as “much of the same”, and by Leader of the Opposition Kamla Persad-Bissessar as “a vicious frontal attack on the poor.” Given that parliamentarians on both sides of the political aisle did not volunteer to take pay cuts during the pandemic, and that the country's roads are in the most deplorable condition in years, the implication that citizens find it “hard” to make sacrifices hit the wrong note. Despite the backlash, Cudjoe stood by her statements, and accused the press of “cherry-picking.”

Acknowledging that the reduction in the country's fuel subsidy remains “the most contentious item” in the 2023 Budget, the Facebook page Newsauce said:

The government will need to deliver better service in terms of road repairs, social grants, public utilities and healthcare or face real backlash from this decision.

Yet, a third misstep came from Minister of Parliament Keith Scotland who, during his contribution to the Budget Debate on October 1, said in relation to the fuel hike, “I have a suggestion. For me, in order to lose weight, I will ride to court. I will take a bike in order to save fuel, that’s my solution.”

However, his advice did not stop there. Making the point that despite TTD 5.45 billion (about USD 803,136,554) in social grants being available and the government distributing food hampers to families in need, he said people were complaining that they could not cook the food as they could not afford gas. Scotland retorted, “I still have a coal pot, you know, where I put my coals and I roast my breadfruit. So if you don’t have that, go back till such time until you can afford the gas, but don’t come and blame you not having gas on the government.”

He added that the fuel price hike is being partially offset by a one-time TTD 1,000 (USD 147) transport grant that will benefit over 175,000 citizens. Many citizens, however, saw things differently.

Facecbook user Re Re posted this riposte:

Things I wish I knew before the [2023] budget:
1. Don’t choose to go into the traffic (so I’ll never work in POS again.. ever! Idk how my boss will take this news)
2. Ride a bicycle…from Chag to POS (not sure what lane I’ll be on thou)
3. Only high end vehicles use premium gas (stupid me was using premium in my swift)
4. Invest in a coal pot (stove nothing)
5. We as a people, indiscipline and not capable of WFH (even thou we did it for 2 years)
The leadership of Trinidad and Tobago.. impeccable!

Many people grew up having to use public transportation because their family couldn't afford cars.

Some couldn't afford to have a stove, or a proper bathroom. This motivated them to put all the effort and hard work to be able to get these things.

The sad part is, they are being slapped in the face by being told to ride a bike, or to use a coal pot. People didn't sacrifice a lot of time, energy and effort to afford ‘luxuries’, that they are now being told to give up.

A meme of Scotland on a bicycle, with a coal pot and breadfruit in the basket, was soon widely spread on social media channels, while this Twitter user shared:

1. There is NO infrastructure in place to ride bikes safely in Trinidad.

2. Coal is one of the dirtiest fossil fuels and he’s encouraging people to use it more?? https://t.co/WHHliuVklY

Adding a distinctly patriarchal tone to the whole affair was Minister of Public Utilities Marvin Gonzales, who said, “We may have to call our […] families together [and] say, ‘You know what? We can not longer afford to go to the movies, […] we may not be able to bake ham every month or make macaroni pie. […] We have cut back because we have to reapportion some of the scarce resources to other important things. And sometimes, our children may scream at us [but] that child […] must have no doubt in their minds that the decisions of their parents [are] for their greater good.”

Kathryn Stollmeyer Wight, who shared a video of the minister's remarks, responded:

Our leaders not reading the room. Condescension is not it. Training is sorely needed.

University lecturer and columnist Gabrielle Hosein expressed how much of the citizenry was feeling after the series of tone-deaf utterances:

The disconnect between political elites and the masses resounds, echoing off headlines, and it cannot be drowned out by shouting about how people are ungrateful. Those who have held power, which is primarily but not only the PNM, are responsible for hundreds of billions of dollars wasted, stolen, unaccounted for, misspent and frittered away. […]

We are told to tighten our belts today because of ‘unresponsibility,’ poor decision-making, failed promises and quid pro quo. Not a soul who has read the newspapers in the last 60 years can disagree. This is why people are angry.

Were things different, citizens would understand the buffeting impact of the pandemic, the war over Ukraine and a global downturn. They would understand banding our belly, together, if it felt as if there were less division and less disconnect, more respect and more shared sacrifice.

Perhaps it is not sacrifice itself that people are shunning, but rather the perceived expectation that it should always be on the part of the people.