Many farmers' lands are bound to be auctioned or acquired 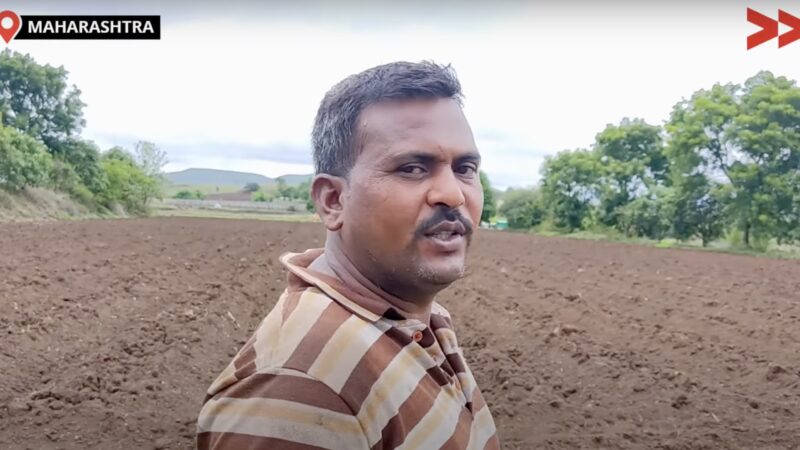 A farmer from Maharashtra whose loan amount compounded to INR 900,000 (USD 10,960) from an initial INR 280,000 (USD 3,410) with interest and credit in four years. Screenshot from YouTube Video by VideoVolunteers.

This compilation of two posts by Maya Khodve originally appeared on Video Volunteers, an award-winning international community media organisation based in India. An edited version is published below as part of a content-sharing agreement.

It is ironic that the farmers in India are always at the bottom of the pyramid of economic prosperity. There are multiple reasons for this phenomenon, ranging from issues of small land holdings and population explosion to agricultural policies and technological innovation.

Another exploitative aspect of the farmer’s woes and penury are the middlemen. VideoVolunteers Community Correspondent (CC) Maya Khodve is from a slum in Nashik, a city in the northern region of the Indian state of Maharashtra. In her video reports below, she is highlighting another set of middlemen, the banks that loan to farmers and slap them with exorbitant interest rates.

In the Dari area of Nashik, Maharashtra, a few farmers have not been able to pay back their loans to the Nashik District Central Co-Op Bank (NDCC) Ltd for the past four years. The NDCC Bank has sent notices of land acquisition and auction notices to them. This situation is grave for the farmers: if their land is auctioned or acquired then they have no means of livelihood left.

The bank is sending them repeated notices and the bank officials are coming to their homes to tell them about this land acquisition. The elderly farmers are under great stress from this whole situation, and, in the video, we can see one farmer even had a paralytic heart attack.

The farmers could not pay the loans back as they have had bad yields for the last four years. The bank loan interest on the other hand was spiralling at a compounding rate. One farmer's loan of INR 280,000 (USD 3,410) has reached INR 900,000 (USD 10,960) in four years. The bank officials then showed him the auction notice and asked him to settle with half the interest amount.

The farmers are saying that, without the government’s intervention, it will not be possible for them to repay the loan or the interest. They are driven to despair.

But, the silver lining is that every year, the Maharashtra government waives the loans of needy farmers. Maya Khodve knew about these schemes. She went to talk to the bank manager with the farmers to find a solution for this grave issue.

The farmers from Dhondegaon village in Nashik district have been visiting NDCC repeatedly to finish their loan account for the last two years, but they were coming up against an administrative issue. The bank officials were insisting that they should pay cash, whereas the farmers want to use money that is already in the accounts of family members in the bank to pay the loans off. The bank tellers were adamant that it can't be done.

To find a solution, the farmers and Maya Khodve went to meet the Chief Executive Officer of NDCC Bank Mr. Pingle and explain to him the issue of repayment. Mr. Pingle accepted their argument and found that it is unnecessary to hold back the repayment of loans when the farmers are ready to pay from their families’ accounts from the same bank. This will make the loan collections faster and will relieve the farmers of the compound interest that is levied, and free up capital for new loans. Mr Pingle issued an order in this regard to the farmers’ relief.

The farmers would not have met the CEO of the bank if not Maya Khodve had not intervened and encouraged them to find a solution to their problems.