A second journalist has been killed under the Marcos government 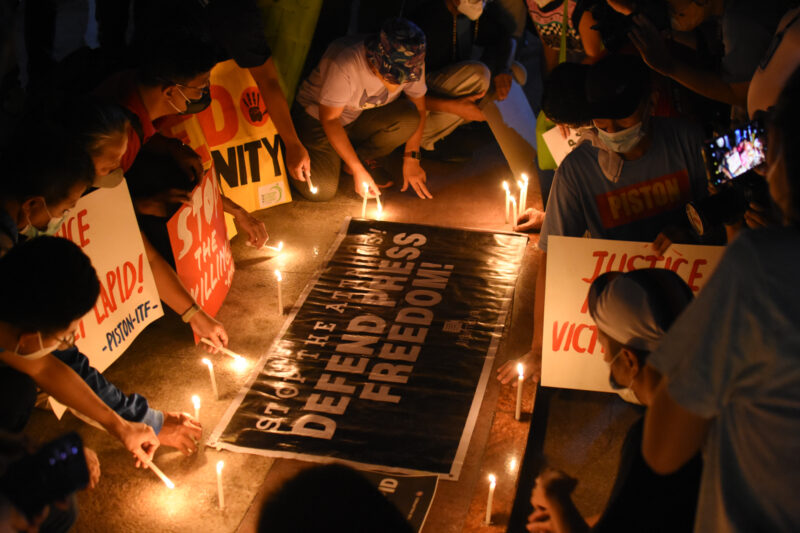 Veteran journalist Percy Lapid, whose real name is Percival Mabasa, was killed by two unidentified persons on October 3 in Las Piñas, Metro Manila, Philippines. He is the second journalist killed under the government of President Ferdinand Marcos Jr., which came to power in July.

Lapid was a radio commentator through his show “Lapid Fire” which aired daily on DWBL station and broadcast live on Facebook. Lapid was a hard-hitting critic of the government who spoke about corruption, human rights abuses, and the dangers of historical revisionism.

His killing drew widespread protests and condemnation. The National Union of Journalists of the Philippines led a candle-lighting protest as it called for justice:

The killing shows that journalism remains a dangerous profession in the country. That the incident took place in Metro Manila indicates how brazen the perpetrators were, and how authorities have failed to protect journalists as well as ordinary citizens from harm.

The Cagayan de Oro Press Club noted that “the culture of impunity in the country has made members of the press easy targets by vested interest groups who want to hide the truth.”

The Foreign Correspondents Association of the Philippines added its voice in urging authorities to bring the perpetrators of the murder to justice.

Percy's murder underscores the threats and risks Filipino media workers continue to face in the country.

We urge government authorities to bring the perpetrators to justice and put an end to the killings of media practitioners.

We at the Presidential Task Force denounce the murder of Percy Lapid and send our deepest condolences to the family, friends and colleagues of the victim. Rest assured that the PTFOMS will not rest until the perpetrators of this heinous crime are brought to justice. There is absolutely no justification for murder.

In an editorial, the Philippine Daily Inquirer wrote that the president can do more to address impunity:

The President can also do more than just express “concern” about the killing, as he has so far communicated through a subaltern. His personal condemnation of the crime and vigorous call for justice should speed up police investigation and identification of the perpetrators, and help exact full accountability from them.

The Commission on Human Rights underscored the role of protecting a free press in a democracy:

We have also repeatedly underscored the crucial need to ensure a safe and unimpaired media environment in order to amplify the voices of the most marginalised sectors and to foster balance in communicating the nation’s state of affairs. Journalists, who primarily responsible for informing the Filipino citizenry of critical information, must be able to work without fear.

Human rights group Karapatan cited the killing of Lapid to remind the United Nations Human Rights Council to initiate an independent investigation on the human rights situation in the country and “conduct more decisive and substantive steps towards justice and accountability for human rights violations in the Philippines.”

Sir Percy was a strong dissenting voice that made sure government officials did not become too comfortable with power.

Percy's death, and all the deaths of all other journalists before him, will never silence us. We will never tolerate a society that is afraid of the truth.

Global media groups have condemned the killing of Lapid. The Embassies of Canada, Netherlands, and France have issued a statement of concern about the killing:

Journalist killings strike at the very core of media freedom & can create a chilling effect that curtails the ability of journalists to report news freely & safely.

We express our grave concern about the killing of broadcast commentator Mr. Percival Mabasa (a.k.a Percy Lapid) by (1/4) pic.twitter.com/LLC2VxpjUS

Radio broadcaster Rey Blanco was the first journalist killed under the new government. He was stabbed to death on September 18 in Manibay town, Negros Oriental.