Over 40 million people in and outside of Ukraine speak Ukrainian 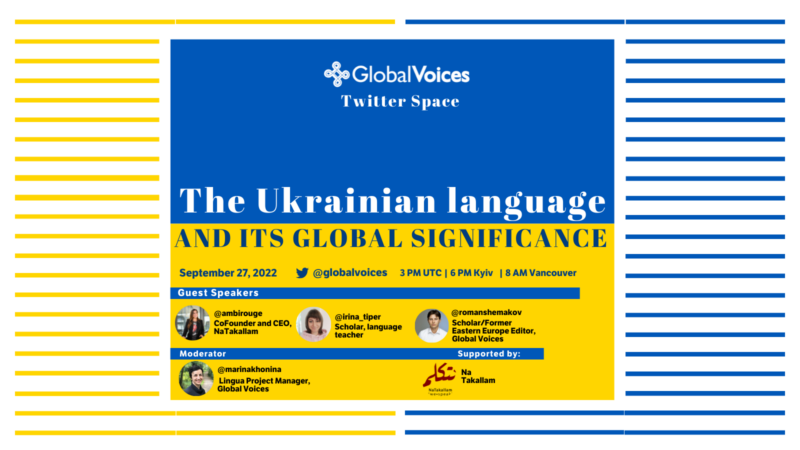 “I guess the general sense is that for a lot of Eastern European immigrants across Ukraine, Belarus, Russia, Georgia, or any Central Asian country, once you leave your home, the lingua franca is Russian.

So the way most Ukrainian immigrants communicate in the United States has been Russian, which is also similar in a lot of Europe, and a lot of Canada. This has been the case until very recently. But now, there has been a fascinating change.

Even the immigrants from Russia who have never been to Ukraine have started picking up Ukrainian, and all of our family friends have attempted, sometimes pretty clumsily, to transition into Ukrainian.

I think any diaspora member is filled with some layers of complexity. Languages are complicated, and especially when we think the current situation with the second invasion and the collective trauma has also had an impact on the languages that people feel comfortable speaking. I think there's a genuine level of pride that has emerged that since I've left Ukraine, I certainly have never seen before, where people are genuinely excited and happy to teach their American friends words in Ukrainian. Like when I was in high school, and first came to the United States, no one in my high school knew where Ukraine was.”

And this is certainly the time to secure much more long-term support for the Ukrainian language that can last into 2023, but that'll persist into the next decade.

There should be funding for people like Irina to be traveling to the United States, traveling to the West, teaching Ukrainian, because there are no Ukrainian teachers or professors in the West that can satisfy a nascent interest that would cement into a long-term passion rather than just, you know, a few months escapade because Ukraine is in the news.”

“Hi, everyone. I am delighted to share a bit about NaTakallam. And our newest addition in terms of language teaching, which is Ukrainian and Russian. But in order to kind of fully share how we got to where we are today, and how we decided to provide Ukrainian and Russian language classes. I think I'll just share a quick background on what NaTakallam is and the origin story.

So Natakalam traces its origin back to Lebanon, my country of origin and the Syrian war. And so Lebanon, back in 2014, was hosting about 1.5 million Syrians in a country of 4 million. And, you know, refugees. We hear about refugees, and we talk about refugees we talked about we talk about forced migration, but it's very hard to grasp the challenges they face on a daily basis. And so many many refugees and people have been forced to flee their homes. And so what happens is they migrate to a country, as was the case for Syrians who flee to Turkey, Lebanon, Jordan, etc., they can flee that immediate violence, but they are not met with a welcome when they get to the country. They are not met with the right to stay or the right to work.

And I had this bit of a lightbulb moment where like, you know, I can't travel to Syria, I can't, go and be in person with Syrians who can teach me Arabic right now, but actually, through the internet, I could still connect with them. And while they may not be allowed to work in the local Lebanese economy, this new virtual realm is kind of borderless.

And so I just thought, Well, why not create a program where I could study Arabic, and my tutor would be a displaced Syrian, who would probably not be able to get full-time local employment in the country that they are in. But they could, however, just be in this virtual space, and they can teach their language, their culture, and share their story — because I think it's so important for the world to understand the stories of individuals who have been forced to flee their homes, to build empathy to build understanding. And so that's how I came up with the idea for NaTakallam.

And recently we thought, you know, can we do something to support Ukrainians? Can we do something to support Russian dissidents who are also in a difficult situation? And so it was quite a powerful moment. And there are also other parallels between Ukraine and Syria, which is the political one, which is Russia being behind a major part of what has happened in Syria due to its backing of the Assad regime. So many Syrians had a very particular kind of feeling like a stake in the game and a special feeling of solidarity with the Ukrainian people.

And so with our staff, we decided to convene and think, Can we can we do this? Can we launch Ukrainian and Russian knowing as well that, you know, that's, that's not necessarily our expertise and our regional expertise? But we quickly found out that it was not something that would be impossible. And in a way, it's very symbolic that it doesn't matter what language you speak, right? It doesn't matter what country you're from. When you are, at the heart of a conflict — when you are subject to human rights abuses, it is just an injustice. And so that was the messaging behind Natakalam. We also believe in sharing people's stories. So everyone was excited to hear the story of of the incredibly courageous Ukrainians who have been subjected to this absolutely useless and horrible war. So, that's a bit about NaTakallam's journey and how we've launched Ukrainian and Russian and how it's been going so far.”