'It's packing quite a punch with a multitude of hazards' 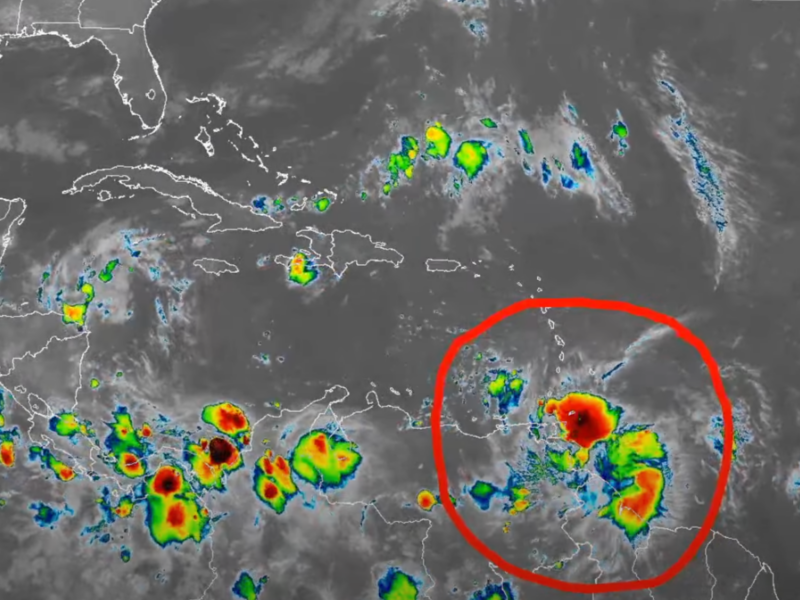 Screenshot of the Invest 91-L weather system that affected Trinidad and Tobago on October 5 and is expected to linger over the country until October 7, taken from the YouTube video ‘Caribbean Storm Developing’ by
Mr. Weatherman.

On October 5, parts of Trinidad and Tobago were hard hit by a tropical wave. The weather system, dubbed Invest 91-L, caused severe flash flooding — especially in areas of eastern, central and south Trinidad, and the sister isle of Tobago — as well as property damage, felled trees, landslides, and suspected loss of life.

A 44-year-old woman, Teresa Lynch, was swept away while attempting to cross a section of the Surrey River in Lopinot, a rural area in northern Trinidad. Her brother, William Ramlogan, attempted to rescue her, but was slammed against some rocks in the process, sustaining injuries. Rescue teams have been searching for Lynch since the incident, with no success thus far.

Just southeast of Lopinot, in the town of Arima, a 55-year-old man, Derrick Pollard, was also carried away by flood waters while attempting to secure some of his family's belongings from flood waters that were coursing through his property. Fortunately, he managed to cling to a tree and was rescued shortly after.

In nearby Arouca, heavy rains and flooding caused two vehicles to be forced into a drain. The compounds of some business places and schools along Trinidad's east-west corridor, including the University of the West Indies’ St. Augustine campus, were also flooded. Many cars were rendered immobile, and many roads impassable.

A road that flows between east and west #Trinidad usually reserved for public transportation, utility and security service vehicles has been opened for public use in the face of heavy flooding along the base of the island's northern mountain range. pic.twitter.com/pLF7jjLzNQ

The country's Water and Sewerage Authority (WASA) issued a press release stating that some of its plants had been adversely impacted by the heavy rainfall.

This is one of the strongest thunderstorms I've seen move across Trinidad, at least for 2022.

It's packing quite a punch with a multitude of hazards. Those in Central Trinidad are next in line to receive torrential rain, gusty winds, and frequent lightning. Head indoors! https://t.co/LXrGEZMEi2

Trinidad and Tobago's Office of Disaster Preparedness and Management (ODPM) said it had received at least 25 reports of flooding in residential areas:

The Ministry of Rural Development and Local Government added that disaster management units, municipal police and other state agencies were “on the ground in affected communities assessing reported incidents and dispatching relief,” but people also experienced power outages and landslips as a result of the weather:

There is some conjecture that the system could signal a hurricane risk for the western Caribbean if it becomes more organised. As at 8:00 p.m. local time (UTC-4) on October 5, the Facebook page Trinidad and Tobago Weather Center posted, “Another round of strong thunderstorms and heavy showers are moving northward across T&T trailing Invest #91L.”

Meanwhile, the Trinidad & Tobago Meteorological Service — the go-to agency for weather-related information and guidance — advised that the country was under a Yellow Level Adverse Weather Alert, noting that the inclement weather is expected to last until midnight on Oct 7:

The axis of the tropical wave is now west of T&T, however the atmosphere remains significantly moist and unstable. Periods of rain and/or showers of varying intensities are still expected. There is also a 70% (high) chance of occasional heavy showers and thunderstorms that can produce intense rainfall in excess of 25mm. Gusty winds in excess of 55 km/h may be experienced especially in the vicinity of heavy showers/thunderstorms. Street/flash flooding and localized ponding are also likely in heavy downpours. Landslides/landslips are also possible in areas so prone.

The Met Office also noted, “After today’s rainfall event, river levels of the major watercourses across Trinidad continue to rise and are currently near 80% capacity”:

Weather conditions have since settled, however occasional periods of heavy showers are likely. This additional rainfall, in combination with spring tides, can keep the river levels elevated, so there remains a moderate risk to public safety, livelihood and property. Smaller water courses over both Trinidad and Tobago are also elevated and can burst their banks with additional rainfall.

Most rivers across Trinidad continue to rise with the Caroni River and North Oropouche Rivers above 70% capacity.

The Arouca River, the only river that has declined, has dropped by 10% over the last 1.5 hours.

While some social media users accepted the situation as an act of God and encouraged people to pray for people's safety, others opted for a practical analysis:

We need to address the drainage problem in Trinidad on a whole 😭😭 https://t.co/Nxk7OVmleQ

Certain areas of the country have a propensity to flood, a phenomenon that has been blamed, over the years, on everything from littering to poor development practices. Whatever the local contributing factors, the climate crisis has undoubtedly placed Small Island Developing States (SIDS) like Trinidad and Tobago in the frontline of the effects of global warming. Unless something significant is accomplished at COP-27 this November, storms like this one will only get worse.